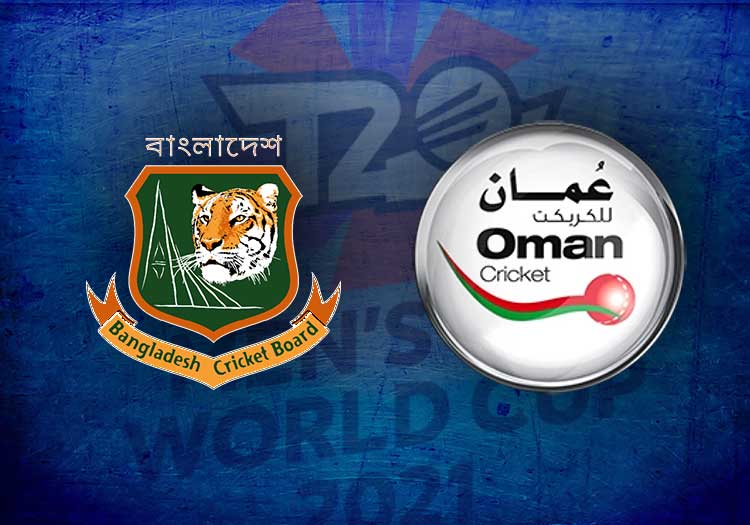 Oman take on Bangladesh in the preliminary round of the T20 World Cup.

The game will be held at the Oman Cricket Academy Ground at Al Amerat in Oman.

Oman got their T20 World Cup campaign off to a strong start, defeating Papua New Guinea by 10 wickets. The home side restricted PNG to 129 before chasing down their target, without loss, with 38 balls to spare. Oman have now won two of their past three T20 outings but their sloppy ground fielding in their tournament opener was disappointing and can't be repeated against Bangladesh.

Speaking of Bangladesh, they entered the 2021 T20 World Cup on a high after recording series wins over New Zealand and Australia. However, aside from a devastating spell of spin in the middle overs, they never looked truly comfortable in against Scotland and fell seven runs shy of victory in pursuit of 141 after an uninspiring batting display. Against Oman, Mahmudullah's side will be hoping to avoid a third successive T20I defeat.

Oman and Bangladesh have met just once in a T20I, with the latter recording a 54-run victory in Dharamsala in March 2016.

Bangladesh are the favourites to win this match, with Dafabet offering odds of 2/9. Oman are available at 3/1.

Jatinder Singh is Oman's all-time leading run-scorer in T20Is and produced yet another classy display with the bat against PNG. The 32-year-old opener, who had scored just 21 runs in his previous four T20 outings n October 2021, scored 73 not out off just 42 deliveries and punished Papua New Guinea's bowlers with seven fours and four sixes. Bangladesh's bowlers will provide much stiffer opposition and it will be exciting to see how Singh fares against Mustafizur Rahman and co.

With the ball, captain Zeeshan Maqsood was devastatingly effective, taking four wickets for just 20 runs from his four overs. Ranked 625th in the T20 Player Index, Maqsood has taken 22 wickets in 32 T20Is and has a career economy of 6.67.

Bangladesh have several bowlers of note, including Shakib Al Hasan (the all-time leading wicket-taker in T20Is) and Rahman. However, against Scotland, Mahedi Hasan was the standout player, taking 3 for 19 with his right-arm offies and kickstarting Scotland's collapse with two wickets in three balls in his first over - expect him to wreak havoc with the ball in overs seven to 14. He also showed spirit with the bat, scoring 13 off just five balls to briefly spark hopes of a Bangladesh win. Hasan has a T20 career strike rate of 128.55 and a flaky batting order ahead of him, so could be called upon with the bat as well.

The following umpires and match referees have been named by the ICC to officiate in the T20 World Cup 2021:

The following officials have been allocated to this fixture:

Temperatures will remain high as the sun sets over Oman, with the mercury hovering around 30 degrees Celsius.

Yes, though Covid protocols including the wearing of face masks will be in place.

Bangladesh will be keen to bounce back after their defeat against Scotland while Oman will have an upset in their sights. A tough one to call but Bangladesh should edge this encounter.

The Star Sports network is showing the tournament in India. Matches can be streamed via Disney+ Hotstar

Other broadcasters by territory:

Our coverage of the T20 World Cup is brought to you in association with Dafabet India. For more on Dafabet and to place a bet, click here