Key players, rising stars, batting and bowling analysis, chances, squad, fixtures and much more in our in-depth look at the Blackcaps 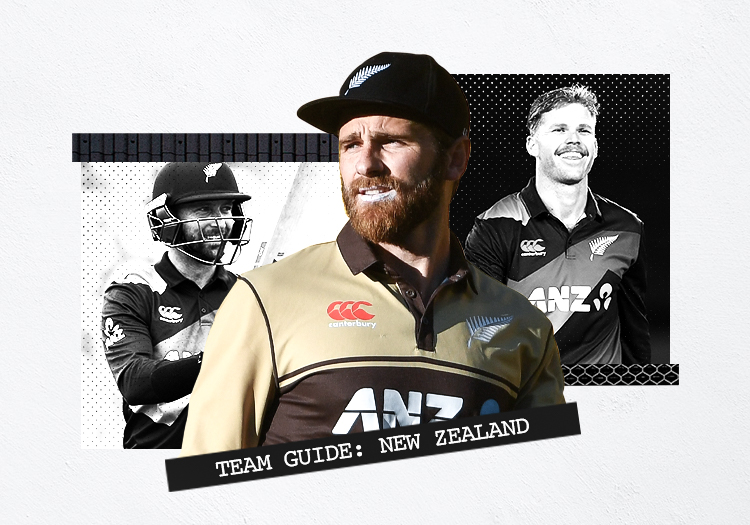 Coach: Former New Zealand international Gary Stead is at the helm for the Blackcaps. The 49-year-old, who made five Test appearances as a top-order batter, was appointed as New Zealand’s head coach across all formats in August 2018 and has steered the national side to both the 2019 Cricket World Cup final and ICC World Test Championship final, winning the latter.

Captain: Batter Kane Williamson is New Zealand’s skipper across all formats, a position he has held since 2016 following the retirement of Brendon McCullum. Having captained his side to second place in the 2019 Cricket World Cup and first place in the ICC World Test Championship, he will be hoping to add a strong result in the shortest format to his captaincy CV. However, he heads into the World T20 with a relatively poor record of 23 wins from 49 matches.

Martin Guptill: What Martin Guptill doesn’t know about T20 batting probably isn’t worth knowing. The veteran opener is New Zealand’s all-time leading run-scorer in the format and needs just 61 runs in the UAE to become the first Blackcap – and just the second player ever (after Virat Kohli) - to pass 3,000 T20I runs. And despite his advancing years, he’s showing no signs of slowing down, scoring 318 runs at an average of 39.75 in eight T20Is prior to the World T20.

Kane Williamson: New Zealand’s long-time leader and a top-order batter who excels in all three formats. His job in T20s is slightly more understated than in the other two formats, playing a supporting role to his more expansive teammates, but that doesn’t stop the 31-year-old from having match-winning contributions in his arsenal.

Tim Southee and Trent Boult: It’s possibly cheating putting both Southee and Boult together but it’s hard to talk about one of New Zealand’s swing twins without the other. The duo are the Black Caps’ go-to pacers, dominating both in the powerplay and at the death. Southee is New Zealand’s all-time leading T20I wicket-taker, with 99 in 81 innings, while Boult has excelled in the UAE over the past year or so for Mumbai Indians. And with this pair to bookend an innings, New Zealand could wreak havoc with the ball.

Devon Conway is certainly not an unheralded youngster, but the 30-year-old is very much a new kid on the international block. The top-order batter only made his T20I debut in November 2020 after moving to New Zealand four years prior but has already made a huge impression on the international stage, most notably scoring 99 not out off just 59 balls against Australia in February. A hard-hitting top-four batter, Conway has also made a splash for Somerset and Southern Brave in the past 12 months, and it will be hugely exciting to see what he can offer in his first major tournament. 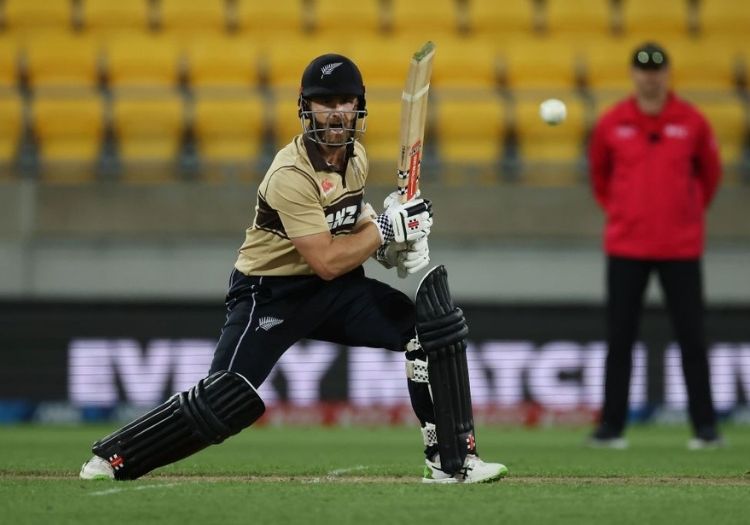 New Zealand have two big hitters in Devon Conway and Martin Guptill. The relatively inexperienced Conway is one of the discoveries of the past 12 months and heads into the World Cup with a T20I strike rate touching 160 and a career T20 strike rate of nearly 130. And while he deals more in fours than sixes, the 30-year-old has no trouble finding the rope – in the 2021 T20 Blast, he struck an impressive 43 boundaries in just eight innings.

Guptill, meanwhile, has nearly as many international caps as Conway has international appearances and knows a thing or two about hitting big. The 35-year-old needs just three maximums in the UAE to reach 150 T20I sixes – he’s already the leading six-hitter in T20I history - and has scored over 1,000 boundaries over the course of his T20 career.

Kane Williamson is the anchorman every player wants to be, balancing strike rotation with well-chosen and well-timed boundaries. Take a look at his 2020 IPL stats: 317 runs at a strike rate of 133.75, a boundary every 6.5 balls and 0.76 runs per non-boundary ball.

And having put in a performance like that in the UAE just 12 months ago, the skipper will feel confident of supporting Conway and Guptill as splendidly as he supported David Warner, Jonny Bairstow and Manish Pandey.

On his day, Jimmy Neesham can be New Zealand’s X-factor player. The 31-year-old’s career T20 strike rate is a shade over 138 while his international strike rate – after 22 innings – is nearly 160.

However, the issue for Neesham is consistency. Alternatively, wicketkeeper-batsman, Glenn Phillips could wreak havoc from No.4 to No.6.

Phillips impressed for Gloucestershire in the recent T20 Blast, scoring 500 runs at a strike rate of 163.39 and while he might not be your traditional ‘finisher’, in the absence of such a player in New Zealand’s 15-strong squad, he might be the best placed to adapt.

New Zealand do not have a daunting ‘big finisher’ in the mould of Glenn Maxwell, Hardik Pandya, or Kieron Pollard, to name but a few. As mentioned, Jimmy Neesham can do it on his day, but isn’t consistent enough to be a banker, while fellow allrounder Daryl Mitchell and Mark Chapman are also not up to the task. In fact, in terms of batting, New Zealand do look a tad light.

While not allrounders like Maxwell and co, New Zealand may live to regret not selecting Colin Munro, Finn Allen, or Colin de Grandhomme to add batting depth and, particularly in the cases of Munro and Allen, firepower. 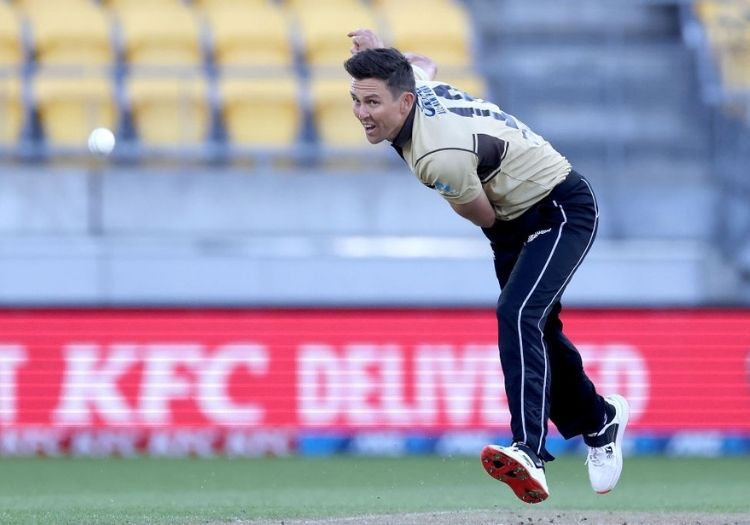 Trent Boult is a danger with the ball

New Zealand have an enviable pace attack spearheaded by dynamic duo Trent Boult and Tim Southee. Leftie Boult is the speedster, regularly reaching speeds in excess of 140kph, and much-feared powerplay hangman. 14 of his 22 wickets in the 2020 IPL came in the opening six overs, marking the 32-year-old out as a new-ball merchant. Southee is the right-handed twin, bowling around 130kph mark and taking responsibility in both the powerplay and the death overs.

Supporting the swing twins are Kyle Jamieson, New Zealand’s pace bowling giant who can generate awkward bounce thanks to his 6ft8 frame but lacks consistency, and Lockie Ferguson, who can touch 150kph on his day. Two nice and intimidating change options.

Santner, who boasts an economy below 7.5 in every T20 competition he’s participated in, regularly takes an over or two in the powerplay alongside Boult, while Sodhi is the middle-over specialist who occasionally dabbles at the death. Quite the complementary duo and two players who can be immensely useful to Williamson in spinning conditions.

While Ferguson and Jamieson are fine T20 pace bowlers and both possess raw speed in abundance, one has to question the wisdom of leaving Adam Milne on the injury replacement bench.

The 29-year-old was one of the stars of The Hundred, regularly bowling a 10-ball spell at the death and bamboozling batters with his perfect medley of yorkers, fast balls and pace-off deliveries. To support Boult, Southee, Sodhi and Santner, Milne would have been the perfect trickster. 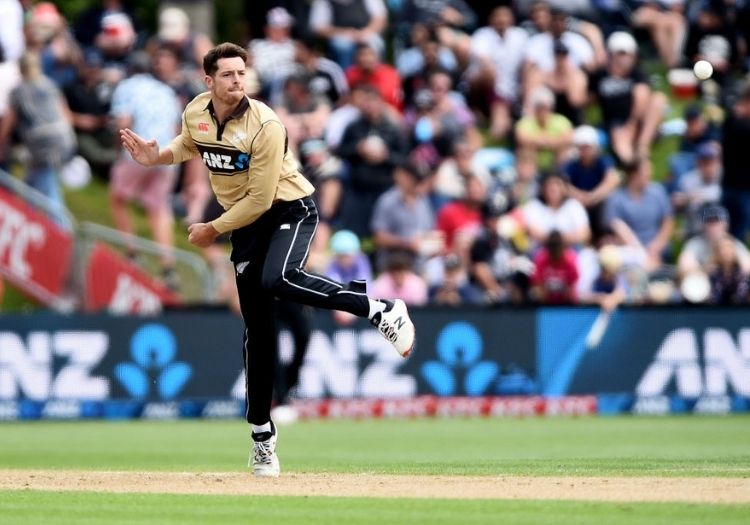 Mitchell Santner is the spinning allrounder for the Blackcaps

Martin Guptill is a wall in the field, both in the inner ring and on the boundary, and he demonstrated his talents in the 2019 Cricket World Cup, saving a tournament-leading 48 runs, completing a screamer of a diving catch to dismiss Steve Smith, and running out MS Dhoni in the semi-final.

In his 277 career T20 matches to date, Guptill has taken 165 catches, while his career haul stands at an impressive 422.

With Glenn Phillips likely concentrating on batting explosively, be it in the top four or as New Zealand’s finisher, and bowling the odd over of spin, Tim Seifert will be the first-choice gloveman.

The 26-year-old, himself no slouch with the bat, has kept wicket for New Zealand on 35 occasions prior to the World T20 and has completed 26 dismissals – just six fewer than Brendon McCullum.