Key players, rising stars, batting and bowling analysis, chances, squad, fixtures and much more in our in-depth look at Scotland 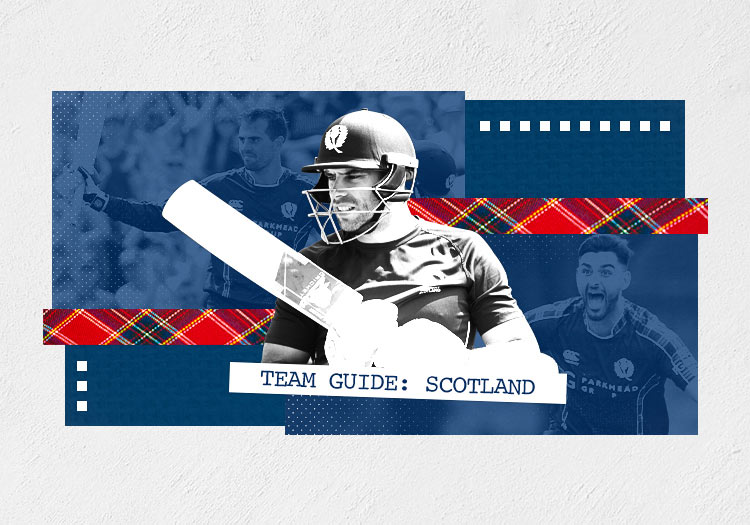 Shane Burger: Scotland’s off-field setup is led by head coach Shane Burger, a 39-year-old South African, who has been in charge since the start of 2019, when he replaced New Zealander Grant Bradburn.

Burger joined from KwaZulu Natal Inland, where he coached for three years and was twice named coach of the year. He is joined for this assignment by former England batter Jonathan Trott as a specialist batting consultant – the 40-year-old was never particularly known for his record as a T20 slugger but he formed part of Trent Rockets’ staff in The Hundred and is highly regarded as a coach. Meanwhile, Craig Wright and Chris Brown are included as bowling coaches.

Kyle Coetzer: Coetzer has long been a well-respected ambassador for the associate game, and the 37-year-old was handed an MBE for services to cricket in the Queen’s 2019 birthday honours. A year later, he was named as the men’s associate cricketer of the decade – an award decided upon by the ICC.

Aberdeen-born, his 156 against Bangladesh at the 2015 50-over World Cup remains the highest score at a global tournament by an associate nation batter. He remains without a hundred in T20 cricket but has six fifties in 60 T20I appearances for his country.

Calum Macleod: The first Gaelic speaker to play Test cricket – when he took the field as twelfth man for England in 2009 – Macleod remains a significant dangerman for Scotland at this tournament, even if his ODI record currently somewhat outweighs his T20I numbers, where he is still waiting for a maiden century to sit alongside eight hundreds in international 50-over cricket.

His unbeaten 140 against England in 2018 will take some beating in the annals of Scotland’s most famous innings, while there have also been scores of 175 against Canada, 113 – off just 62 balls – against UAE and 157 against Afghanistan in a knock most notable for his dominance of Rashid Khan. His last T20I fifty came against Bermuda in October 2019, seven appearances ago.

George Munsey: There aren’t many players in world cricket fonder of the sweep shot and its various alternatives than the left-hander, who hit 14 sixes in his demolition of Netherlands in 2019 – an innings of 127 in 56 balls. In doing so, he and Coetzer put together a 200-run opening partnership, the third-largest in T20I history.

“I genuinely feel confident enough to hit right-handed over mid-off,” he told The Cricketer of his penchant for the reverse-sweep – a skillset that might just have its roots in his talent as a scratch golfer, where he was a teenage contemporary of Eddie Pepperell and Tyrell Hatton. Of anyone to have faced more than 250 balls in T20Is, only eight men have a higher strike rate than Munsey’s 154.85, with Andre Russell among them. He is the highest-rated Scottish player by the T20 Player Index, coming in at No.338.

Safyaan Sharif: The leading wicket-taker for Scotland in the qualifying tournament two winters ago, Sharif’s most famous moment in international cricket came in trapping Mark Wood in front to seal victory over England in the famous 2018 ODI victory. To date, he has taken 53 T20I wickets, including joint-career-best figures – 4 for 24 – against UAE and Zimbabwe.

Now 30, he was drafted in by Kent earlier this summer – along with Munsey – to form part of an Emergency Squad after their first-choice T20 Blast side was forced into isolation after a positive case emerged following a win over Surrey. His time at Canterbury didn’t extend beyond two appearances but he was one of 25 players used in Kent’s title triumph. 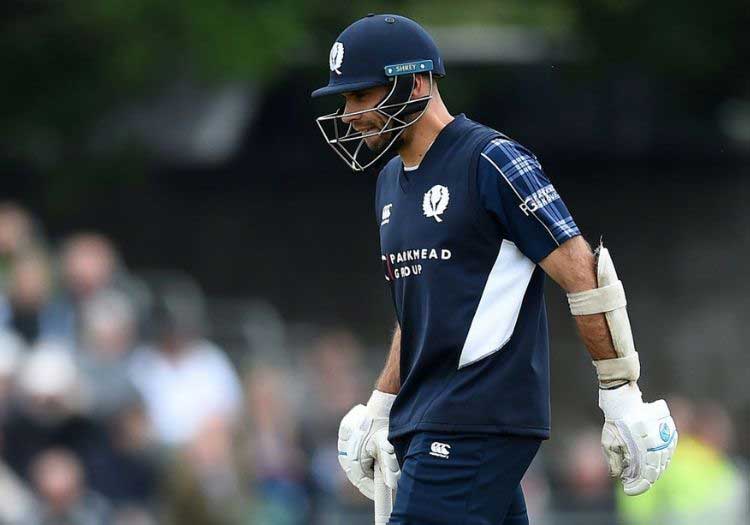 Brad Wheal: A talented hockey player in his youth in his birth-country of South Africa, he was first spotted by Dale Benkenstein, who was coaching Hampshire at the time, a quirk of fate that earned him a contract with the south-coast county.

Six years on, he arrives at this World Cup – on account of his Scottish mother – with his stock as high as it has ever been, following a terrific personal run in The Hundred that saw him take nine wickets in just 58 balls, giving him a strike rate of 6.4. He last played a T20I four years ago.

Richie Berrington: Only Munsey hit more sixes than the 34-year-old veteran during the qualifying event in 2019, smashing nine balls over the ropes, as well as 11 fours. He enters this tournament in decent nick, having made 82 not out in a win over Zimbabwe in September and 97 against Oman in an ODI. Going further back, perhaps Berrington’s finest hour came in a 56-ball T20I century against Bangladesh in 2012 that took Scotland to their first victory against a full member nation.

George Munsey: Referenced earlier as a key cog in Scotland’s wheel, Munsey is in terrific run-scoring form: 2021 has been a profitable period – he scored 302 runs in five innings for Kent during the Royal London Cup, including a maiden List A century.

In the last month, he has made scores of 50 against Papua New Guinea, 67 against Ireland – off just 25 balls – and 58 against Oman, all in the space of a single October week. In his 127 against the Netherlands in 2019, referenced earlier, 104 of the runs came in boundaries – only five T20I innings have included more. In the last three years, his strike rate against full members has risen to 162.19.

Macleod’s career strike-rate in T20Is is just 114.02 and in the qualifying competition two winters ago, his was lower than those of Munsey, Berrington and Matt Cross. He managed 228 runs in eight innings though, helping his side to this position.

Cross is another intelligent player: he averaged 47.25 during that qualifying tournament and was only dismissed four times, hitting two fifties in the process. He wasn’t required with the bat in warmup wins over Papua New Guinea and Ireland.

In the latter of those two, Michael Leask performed the finishing role with aplomb, smashing 29 off just 15 balls, including two sixes and three fours. Leask has previous, having belted five sixes against England during a 2014 ODI. More recently, he won Scotland an ODI against Papua New Guinea in September, coming to the crease at 146 for 5 and making an unbeaten 51 off just 34 balls to see his side home with seven deliveries to spare.

There is plenty of pressure on Scotland’s top five, with a lengthy-looking tail and a lack of real firepower beyond the likes of Munsey and Berrington. Other than Munsey, Ollie Hairs is the only other left-hander among the recognised batters in the squad. 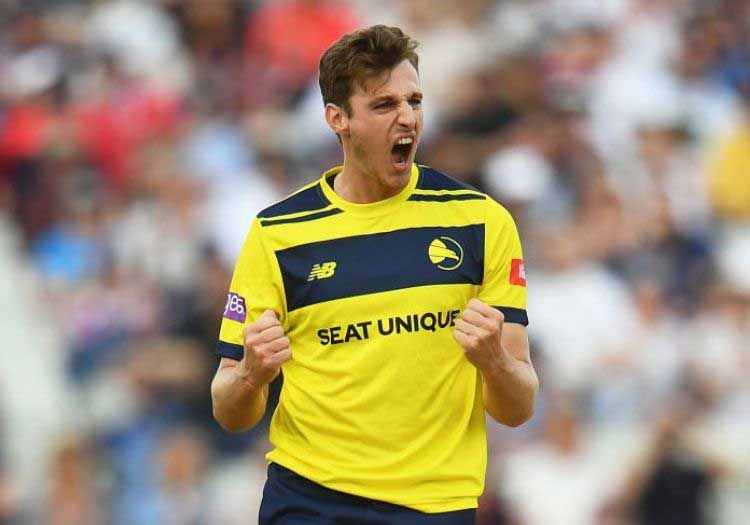 Brad Wheal is part of the bowling unit

Beyond Brad Wheal, who joined the squad later after completing the county season with Hampshire, there isn’t a great deal of genuine pace in Scotland’s squad, though Josh Davey – another late arrival after similarly finishing his campaign with Somerset – is a fine seamer, as are Sharif, Alasdair Evans and Chris Sole, son of former Scotland rugby player David. They are lacking a left-armer, though Sharif and Davey shared 23 wickets between them in the qualifying competition.

Mark Watt and Hamza Tahir are wily left-arm spinners, with the latter a cousin of former off-spinner Majid Haq. Chris Greaves made his international debut against Papua New Guinea at the start of October; the 31-year-old leg-spinner made a single appearance for Gloucestershire’s second team in 2019. Leask, Macleod and Hairs provide further finger-spinning options.

A lack of genuine pace could prove problematic, while Greaves is the only wrist-spinner in the squad and there are no left-arm seamers. Scotland are not short on part-time offies but both specialist spinners are left-armers. 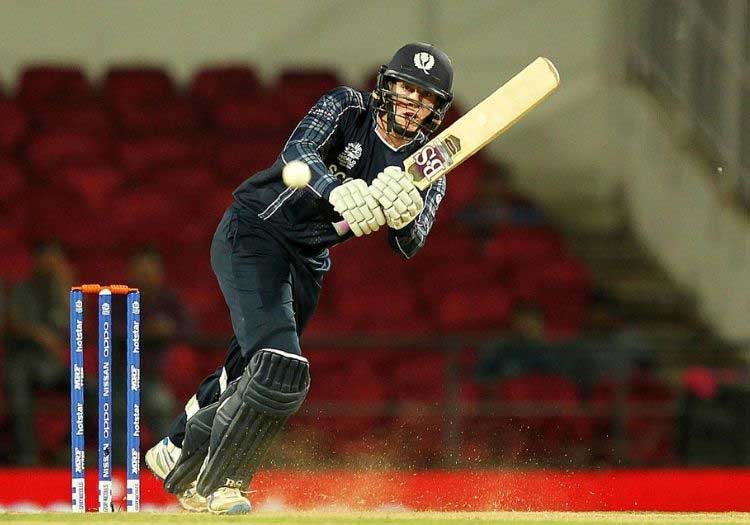 George Munsey is a major threat with the bat

Scotland will field well, led by Coetzer who – even as a veteran at the latter end of his career – remains responsible for one of the all-time great boundary catches, plucking a one-hander out of the sky on the long-on rope to dismiss Mark Boucher 12 years ago in the World T20.

Matthew Cross will take the gloves for Scotland, with Craig Wallace an able deputy. Cross once claimed six dismissals in an ODI against Canada seven years ago – the joint-most of all time, placing him alongside Adam Gilchrist, Ridley Jacobs, Alec Stewart, MS Dhoni, Matt Prior, Jos Buttler, Sarfraz Ahmed and Quinton de Kock as the only men to achieve the feat.

In T20Is, only nine wicketkeepers have accounted for more career dismissals – all from full member nations. He will back himself to surpass Kumar Sangakkara and Sarfraz over the next month, with the top six then in his sights.