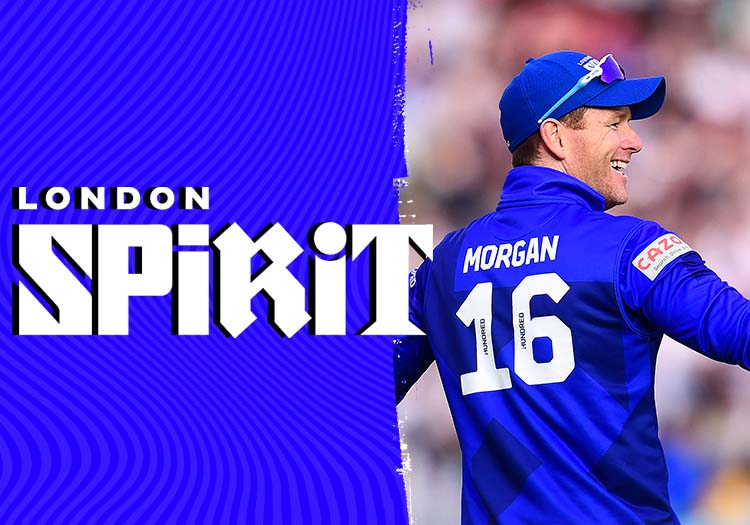 The passing of Shane Warne in March forced Spirit to make an untimely and unwanted change at the top but they've landed on their feet. England men's 2019 World Cup-winning axis is back together and while coaching roles have been rare since his departure - Sunrisers Hyderabad aside - his CV and credentials are indisputable.

It has been a wretched last 12 months for the Irishman. After a Hundred campaign including one win, injury troubles have taken over, forcing him to retire from international cricket and abandon the white-ball captaincy. Will hope that linking up with Bayliss again can re-energise him.

Glenn Maxwell: Returns after pulling out of a spell in 2021, but will only have a limited involvement. An allrounder whose batting has completely taken over in recent years. A linchpin for Melbourne Stars and Australia, he is a top order batter these days but could easily feature anywhere in the order including as a finisher.

A three-time Big Bash League runner-up but was part of the T20 World Cup-winning squad in the United Arab Emirates. Has a modest international and Blast record in England that he will want to set right. Morgan may sneak him into the attack to chew up a set but there is little doubt over his main role.

Ben McDermott: The latest star off the McDermott family conveyor belt. Arrives off the back of helping Hampshire Hawks win their maiden Blast title. One of eight overseas wildcards and while in form, a curious pick given Adam Rossington is available to take the gloves, the top-order is stacked and the obvious gaps in the seam attack, but he will be a key figure when Maxwell leaves for Australia duty.

The 10th highest BBL run-scorer in history (more than Dan Christian or Callum Ferguson) so he is more than reliable with the bat. 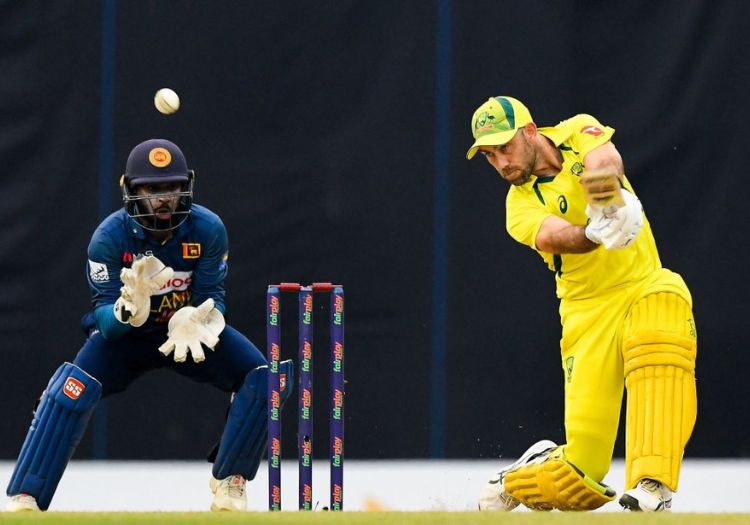 Kieron Pollard: Having withdrawn from a season with Welsh Fire, Pollard returns to The Hundred with London Spirit who used their first pick in the draft to add the West Indian allrounder. Spent part of the Blast season with Surrey before a hamstring injury cut the deal short. Hopeful of being fit for the start of the campaign.

With 15 T20 title triumphs, nearly 600 outings and 12,000 runs in the shorter format, Pollard adds a winning mentality, ample experience to the leadership group and fireworks down the order. Less of an influence with the ball these days but is good for a set or two.

Nathan Ellis: A late replacement for Riley Meredith, but Bayliss and Morgan will feel they have lucked out with another component of Hampshire's Blast-winning bowling attack. The Australia has eyes on the T20 World Cup and another successful showing here will only enhance his case.

A death bowling economy rate of 6.61 in the Blast was what eventually secured the title for Hampshire and could be priceless as Spirit embark on attempting to make up for last year's poor campaign. Not blessedwith the pace of Mark Wood but his accuracy will come in use.

Josh Inglis: Released during the off-season but returns when Maxwell departs for the Zimbabwe white-ball matches. Looked like a shrewd signing after his Blast heroics for Leicestershire but was unable to repeat his form in the slightly shortened format. Since last summer, he won a second BBL title with Perth Scorchers, though was underwhelming until a 79 in the Qualifier, but it was enough to make eight appearances for Australia against Sri Lanka and Pakistan during the first half of the year. Adds to the options with the gloves but may have a watching brief.

Zak Crawley: Availability hinges on whether England persist with the Kent batter in the Test team. Played just once last season, hitting 64 against Birmingham Phoenix and has a good white-ball record (T20 strike rate: 148.58). But his recent form is average, struggling in the Blast and without a half-century in any format since mid-May. As a graceful, attacking ball-striker the change of scene might be just what he needs. However, there is an argument over whether he even gets into the first-choice XI.

Dan Lawrence: A curious year for the Essex batter, who showed glimpses of his best form in the Caribbean and took that into the start of a county season. Injury derailed him somewhat and having lost his England place hasn't yet run hot. That will be Spirit's gain in 2022, however, and he should be available for the duration. As well as being inventive with the bat - a spot between No.3 and No.6 seems likely - his offbreaks will be a highlight and will surely undo a few.

Jamie Smith turned down the chance to play in The Hundred last summer, remaining to captain semi-finalists Surrey in the One-Day Cup. He averaged 63 and has carried that into the LV= Insurance County Championship, where he scored a maiden double century. Uncertain how much he will feature with Rossington and McDermott around but at 22 it'll be a good learning experience. 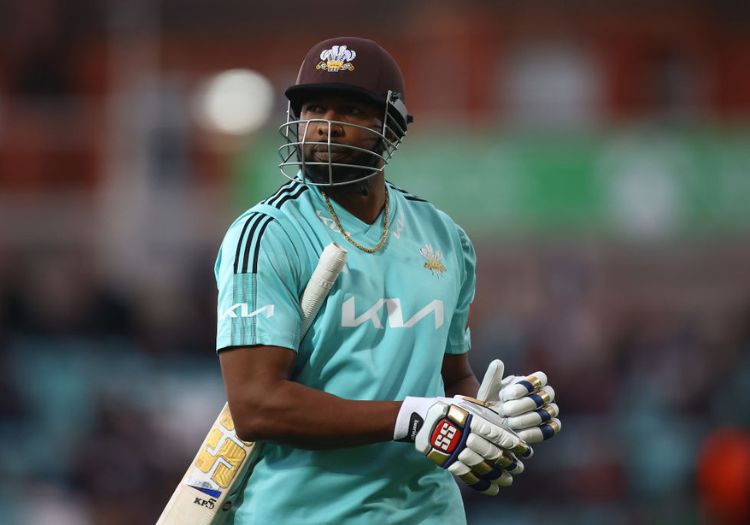 Kieron Pollard, if fit, will add plenty of clout to Spirit's batting and bowling [Getty Images]

Both Maxwell and Pollard strike at 151 in over 900 T20s between them and sit in the top 11 six-hitters in the format (second and 11th) and as a middle-order axis might be the most formidable in the competition.

If Morgan and Crawley can blow away the cobwebs, McDermott picks up from where he left off with Hants and contributions come down the order from Jordan Thompson, who possesses the fastest Finals Day fifty, and Ravi Bopara, then there is a deep batting line-up capable of going big. Inglis wasn't a particularly fast scorer in The Hundred but it was only last summer that he smashed 531 runs for Leicestershire Foxes at a strike rate of 175.82.

Though he won't be indulged, Morgan's lack of cricket and experience lends himself to this role. Indeed, he will be the ideal foil to Maxwell, Lawrence and Pollard as the innings progresses, rotating strike and allowing his explosive teammates to take hold.

Only MS Dhoni can claim to have held a stronger grip on the status as the world's best white-ball finisher over the last 10 years, than Pollard. An intimidating presence to bowl at and able to lash the ball to all parts at pressure-points in the innings, the West Indian is a trump card at the death. There are still bits of Akila Dananjaya scattered around Antigua after that over of sixes last year. Thompson proved in the Blast semi-final that he doesn't just have the temperament for the big occasion with the ball.

Problem areas: Adam Rossington scored at 152.17 in 2021 and having enjoyed a good Blast season will be expected to open again, though a finger injury incurred while playing for Essex in the Championship just prior to the start of the tournament will be of concern.

McDermott or Kent's Daniel Bell-Drummond are likely to be his partner if he is fit. In short, while the talent is there in abundance in the middle order and below there is a drop off in the top two. Early wickets will bring them to the fore much sooner, which might not be altogether fatal. This predicament will be eased by Inglis's arrival, but what they gain in a reliable opener (he top-scored for Spirit in 2021 with 173 runs) they lose in Maxwell's explosiveness. 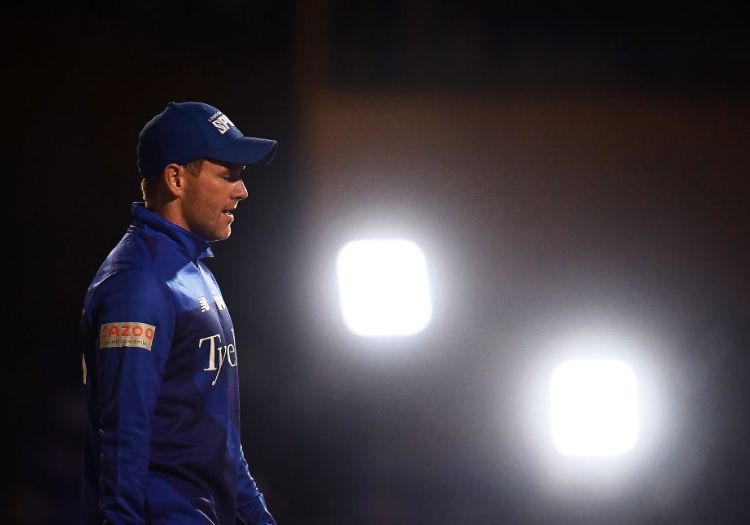 "It's not going well actually." Wood will be missing for The Hundred as he prepares to have a second bout of elbow surgery that threatens his involvement in the T20 World Cup.

Remove fellow injury victim Blake Cullen from the equation and Spirit have a void in their squad. Riley Meredith's varying results for Mumbai Indians was an indication of the risk Spirit were taking, but they are still devoid of a like-for-like replacement. Brad Wheal was Hampshire's leading wicket-taker on the way to their Blast success and is the out-and-out wicket-taking option.

Mason Crane may remain fresh-faced but at 25 is the central spin threat for Spirit. The leg-spinner has endured an odd campaign; loaned to Sussex, a Blast champion with Hants and now under pressure to harness the energy created by Warne, not least build on his advice. He told ESPNCricinfo: "He is a big part of it, really.

"A lot of his attitude towards the game and his way of the game has certainly been passed to a lot at the club. I'd like to feel he's part of what's going on at the moment."

Ellis showed superb character to block out the chaos of the final over in the Blast final to execute and take Hampshire to the title and that same role beckons for him over the next four weeks. Toby Roland-Jones' six Blast outings for Middlesex were his first of the decade but he remains an experienced option and full of Lord's knowledge.

The former England seamer collected 10 wickets at 17.80 for Middlesex in the T20s and can put the ball on a good length on a consistent basis. Ten games in 27 days might be a stretch and he might be a luxury pick give his batting career.

Hundred captains used the 10-ball option with a degree of flexibility last season, reacting to batters being put under pressure or wickets falling. Bopara's ability to bowl wicket-to-wicket and hit a length could be priceless. It might also provide an opportunity for Morgan to sneak in an extra set from Maxwell or Lawrence. 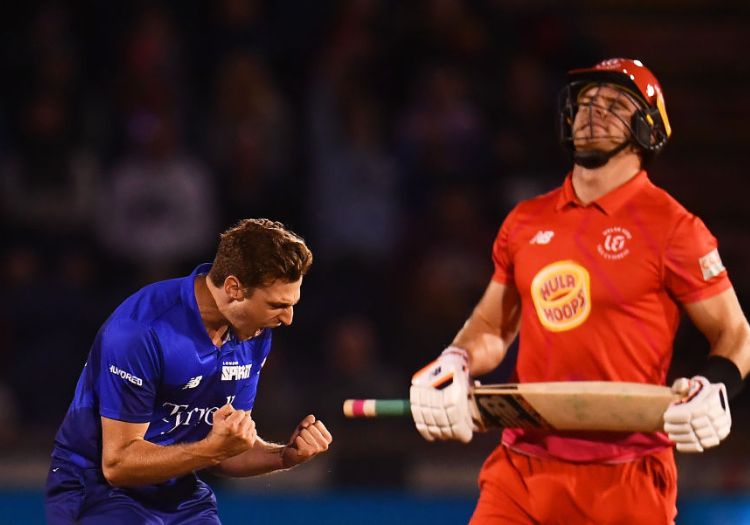 Bopara's six catches in the field was the second best in the whole men's competition. Despite his large frame, Pollard cannot be underestimated and has more than 350 dismissals across his extensive career - including 31 runouts. Maxwell sits just below the former West Indies captain on 25.

It will likely be a three-way straight shoot-out between last season's gloveman Rossington, McDermott and Inglis once the latter joins up to replace Maxwell. Hants' overseas keeper McDermott was only second behind Alex Davies for Blast dismissals last term. Last season, Inglis and Rossington were paired together, it was the now-Essex keeper who took the responsibility on - a possible insight into where Spirit might go this time around.

Warne leaves a chasm on the cricket landscape so large it almost unfathomable. In a competition so much about bringing new fans to the game he was a passionate, enthusiastic, and important voice. On the playing side, Spirit naturally ran the changes after one win in eight.

Maxwell is back after missing last year while the entire overseas contingent has changed. Perhaps the most surprising change came in the form of Roelof van der Merwe, who departed despite seven not out innings worth 77 runs at a strike rate of 132.75 and five wickets in 20 sets of his left-arm darts. Chris Wood was released but is back, while Thompson, Bell-Drummond, Smith and Dawson look like shrewd additions.

Lord's may not be to everyone's taste, but it is a British sporting institution. Who knows how long it remains a venue for the finals, but The Hundred could hardly have started anywhere else?

Naturally, it is a ground Morgan has fond memories of but that was also the case last season. An average score of 148 batting first last term is added to by a T20 average of between 170 and 180 in recent years. The outfield can be like glass. Spirit men were winless at their illustrious home last season, which has to change if they're to make the top three.

Sound from the ground: BBC Radio presenter Jess Iszatt is the resident DJ at Lord's this summer. She has already appeared at the likes of Glastonbury and Secret Garden Party this summer. Live performances come from the likes of Celina Sharma and SOFY, while multi-platinum pop band Bastille will headline finals day on September 3.