The Cricketer's in-depth look at Thunder ahead of the new campaign, including player analysis, strengths, weaknesses, and full squad and fixtures listings 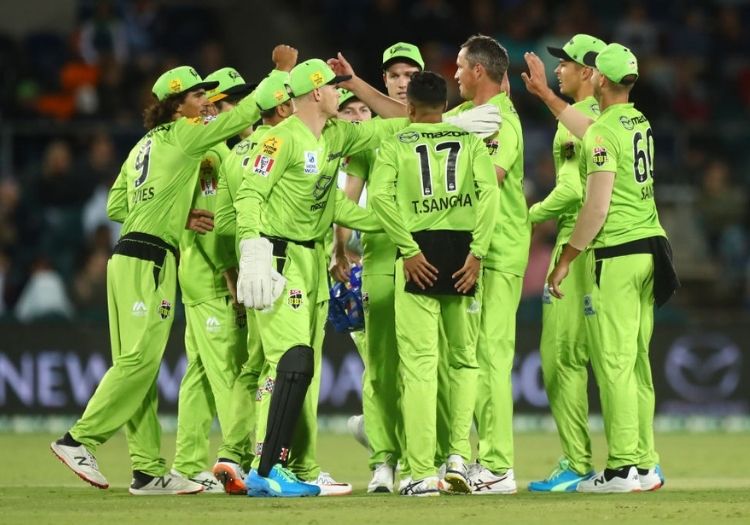 The architect behind England’s white-ball resurgence has taken over at Thunder, replacing Shane Bond as the man in charge. He has signed a three-year deal with the team, having recently led Sunrisers Hyderabad in the Indian Premier League, where he has previously coached Kolkata Knight Riders to two titles. In the inaugural season of the Big Bash, Bayliss was at the helm as cross-city rivals Sydney Sixers won for the first time.

Khawaja is Thunder’s new captain, replacing Callum Ferguson, who was unceremoniously dumped by the club in February. Ferguson – who was preceded by Shane Watson – informed his social media followers that he was moving on after not being offered a contract for this year. Khawaja, who is in Australia’s squad for the upcoming Ashes series, explained upon his announcement as Ferguson’s successor: “Cal was awesome as a bloke and teammate – he will be missed amongst the group here for sure. Me being captain, it’s not about reinventing the wheel.”

Alex Hales: It has already been an interesting campaign for Hales, and the competition hasn’t even begun. The Nottinghamshire batter has smashed more than 1,000 runs across the last two years in Sydney but has rarely been far from controversy. A matter of weeks ago, his Big Bash contract was in jeopardy after a 12-year-old blackface image of the opener at a party emerged. He apologised and a statement from Cricket NSW chief executive Lee Germon confirmed that the pair had spoken. It means that Hales has been reunited with Bayliss, the coach when Hales was deselected from England’s World Cup squad on the eve of the tournament.

Ben Cutting: The big-hitting allrounder enjoyed a solid start to life at Sydney Thunder after his shock departure from Brisbane Heat, an exit caused by a difference in opinion across several matters. The strength of Cutting’s hitting – he has hit 153 sixes in a 171-match T20 career – has earned him overseas gigs with Quetta Gladiators, Rajasthan Royals, St Kitts and Nevis Patriots, Kolkata Knight Riders, Sunrisers Hyderabad and Mumbai Indians.

Daniel Sams: The left-arm seamer scored 200 runs and took 11 wickets during last year’s run to the playoff phase, a year on from a remarkable breakout competition in which he took 30 wickets. His reward for that progress was a non-playing role as a travelling reserve in Australia’s glorious T20 World Cup campaign. Before that, he had been part of Royal Challengers Bangalore’s squad in the first part of the Indian Premier League, before its postponement. He made his international debut a year ago.

Ollie Davies: The young batter has only played eight games in the Big Bash but has already shown plenty of talent – enough for Glenn Maxwell to describe him as “an excitement machine” on Twitter, coming to Davies’ defence after criticism from former Australia seamer Stuart Clark during a 50-over game. On his Big Bash debut, the youngster smashed 36 off just 22 deliveries in a victory over Perth Scorchers. He previously represented Australia at under-19 level at the World Cup in 2020.

Sydney Thunder’s biggest change is a big change. Callum Ferguson is no longer the captain and he was released at the end of last season, leaving Usman Khawaja as the man in charge – a move that may well backfire after the left-hander was picked by Australia in their Ashes squad. They haven’t particularly replaced Ferguson, with more opportunity likely for talented youngster Ollie Davies. Adam Milne was the overseas quick last year; he has been swapped out for Saqib Mahmood. Otherwise, the most significant shift is in the coaching department, where Trevor Bayliss comes in at the top, replacing Shane Bond.

Thunder finished third in the group stage but then lost in the knockout against Brisbane Heat. 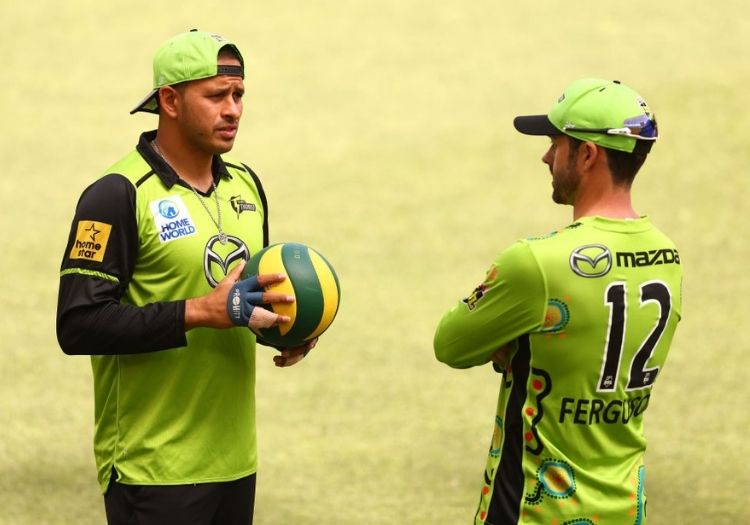 Usman Khawaja, left, has taken over from Callum Ferguson, right, as skipper

Alex Hales: No one scored more runs in the competition last year than Hales, who did so while hitting the most sixes in the competition. He smashed 543 runs at a strike rate of 161.60, including a rapid hundred against Sydney Sixers. The previous year, he scored even more runs, albeit at a slightly slower rate. How he fares will go a long way to determining Thunder’s success this year.

Ben Cutting: He whacks it. Only Chris Lynn and Glenn Maxwell have hit more sixes in the history of the Big Bash, with Cutting facing a significantly lesser number of deliveries than the pair above him in the rankings. A far more brutal player of pace than spin, his strike rate in T20 cricket – as of February this year – was 170.99 against seam bowling and 110.20 against spin.

Previously Ferguson’s role, it will be interesting to see how Thunder fill his void. Sam Billings could play that role, though he is also a skilled finisher, while Alex Ross is an excellent player of spin. Khawaja, in all likelihood, will open the innings with Hales – the main aggressor – when available, with his role likely to be complicated by Ashes selection.

Billings batted predominantly at No.4 last year, with Ross one spot below him in the middle order, leaving finishing duties to Cutting, as ruthless a hitter as exists in the tournament. Last year, across an array of cameos, he averaged 40, scoring 280 runs in the process and smearing 16 sixes. Billings – in 50-over cricket, at least – has emerged as an option in the final overs for England, given his ability to score all around the ground.

It is not so much a problem as a reality that much will depend on whether Hales can back up his remarkable work of the last two seasons. If so, then Thunder will hardly miss Ferguson, their former captain and an experienced campaigner. If not, then his absence will begin to look quite costly, especially with Khawaja likely missing a considerable chunk following his Ashes call-up. Likewise, Davies fractured his thumb playing grade cricket in mid-November and is likely to miss the beginning of the competition. Thunder’s best side might not make it onto the field together until a fair way into proceedings. 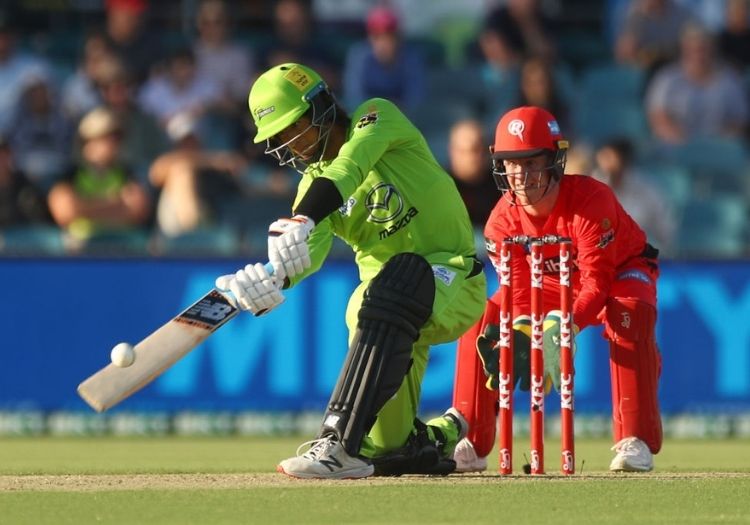 Watch out for Ollie Davies in the new Big Bash season

Speed merchants: Chris Tremain, Nathan McAndrew and Brendan Doggett make up Thunder’s cartel of domestic right-arm seamers, with Doggett the quickest of the trio. The addition of Saqib Mahmood, however, gives them a point of difference: the Lancashire man is highly regarded and has impressed in his fledgling white-ball career for England, spearheading a depleted attack in an ODI series win over Pakistan that was achieved despite missing their entire first team to isolation. His ability to swing the ball from his slingy action makes him a serious threat. Sams provides the left-arm option, with Cutting also delivering 29 overs last year.

Variation: Jono Cook only played three matches last year but is a reliable leg-spinner, while Tanveer Sangha emerged as one of the stars of the tournament. He was ever-present, picking up 21 wickets in the process as 20-year-old highlighted his serious potential. His reward was a spot in Australia’s T20I squad against New Zealand in January. “We have high hopes for him going forward,” said then-selector Trevor Hohns. He added: “However, we don't want to put too much pressure on a young player, especially a leg-spinner.” The two leggies are joined by Chris Green, a different breed of T20 spinner, firing in his darts and watching the batters’ movements relentlessly.

Problem areas: Mahmood apart, Thunder look short on high-quality seam bowling. Adam Milne was part of their team last year and, although he only took five wickets in 12 games, his economy rate – 7.56 – did at least mean he was rarely taken down.

Billings is a world-class fielder though will likely keep wicket. Alex Ross has a history of world-class catches. Cricket Australia’s own fielding metrics – revealed ahead of last year’s Big Bash and taking into account the three previous editions – placed Green and Hales in the competition’s top ten fielders.

Billings kept wicket last year and claimed three stumpings, but both Baxter Holt and Matthew Gilkes are also options behind the stumps, should Thunder opt to make the most of Billings’ athleticism in the field.