BIG CRICKET SURVEY 2019: ECB remains unpopular as 62% say governing body does not do a good job running the game

It has been a difficult year for public relations in English cricket, with the introduction of The Hundred raising questions about the future of the domestic game and many county members feeling as though their voices are not being heard

The ECB remains unpopular with readers of The Cricketer, with more than 62 per cent of respondents to the Big Cricket Survey saying the governing body does not do a good job of running the sport in England and Wales.

It has been a difficult year for public relations in English cricket, with the introduction of The Hundred raising questions about the future of the domestic game and many county members feeling as though their voices are not being heard.

That sentiment is echoed in the results of our online poll, which received nearly 2,400 entries at the beginning of the summer.

We asked fans to what extent they agreed or disagreed with the statement: “The England and Wales Cricket Board (ECB) does a good job in governing the game of cricket”.

Just 1.60 per cent said they strongly agreed with the statement.

The ECB’s many positive initiatives, including their recently-released blueprint for the transformation of women’s and girls’ cricket, and the much-vaunted South Asian Action Plan, have routinely got lost among the malaise of the new tournament and the tsunami of negative PR which has followed it.

The general sense of resentment towards the ECB among The Cricketer’s readership was also seen in the responses to a question about the fair and equal treatment of each of the 18 first-class counties.

We asked fans to what extent they agreed with the suggestion that the ECB “acts in the best interests of all 18 first-class counties”.

More than 40 per cent strongly disagreed, and a further 32.88 per cent said they tended to disagree - an overall negative response of 73.34 per cent (compared to the 2018 equivalent of 70.5 per cent). 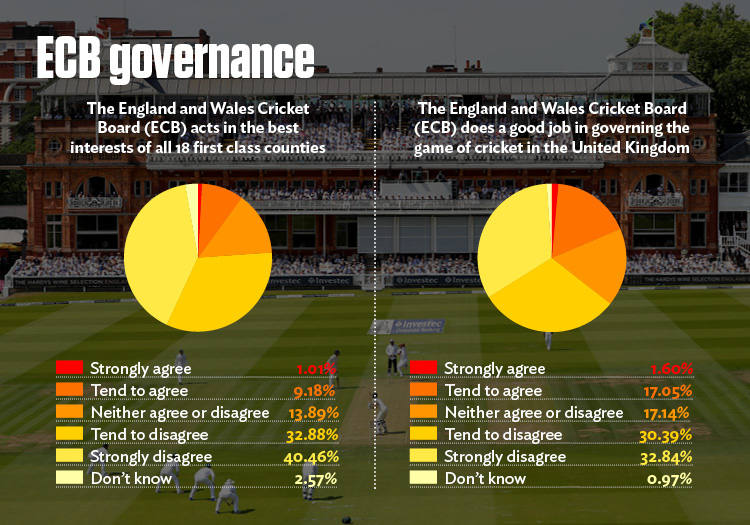 This point is particularly relevant in 2019, given the discontent felt by many non Test match venues following the allocation of Hundred host grounds.

Supporters from the south west in particular have been vocal in their opposition to the plans, which will see their nearest Hundred franchises located in Cardiff, Southampton and Birmingham.

Colin Graves, the ECB chairman, has had his term in office extended to see out the first season of the new competition and will move on towards the end of 2020.

He and Tom Harrison, the chief executive who negotiated the new £1.1billion broadcasting rights deal, which will kick in from next year, continue to struggle to win over angry and sceptical supporters.

We asked our readers: “How much confidence do you have in the corporate governance structure at the ECB?”

The results speak to a split in the game, with around two thirds saying they have little or no confidence in the hierarchy at Lord’s.

Just 2.16 per cent said they have full confidence in the governance structure.

The ECB were presented with all of the data from the Big Cricket Survey and, having declined an interview to discuss the results, were invited to provide comment by way of a statement.

A spokesperson said: “It is the ECB’s priority to protect and nurture cricket at all levels and the new five-year strategy has a wide-range of initiatives to grow the game in close consult with the counties.

“The Hundred is one of those strategies with a financially positive business model that helped to swell the value of the new broadcast deal with Sky and the BBC which will be invested into the whole game for the benefit of the game.

“The tournament will bring cricket back onto free-to-air television and entertain fans new and old with the world’s best men’s and women’s players.”