As one door closes, Graham Onions starts out on his coaching journey

NICK FRIEND: Onions has been preparing for this moment for some time, even if it came prematurely; a back injury picked up on the eve of the Bob Willis Trophy left him no choice but to hang up his well-worn bowling boots 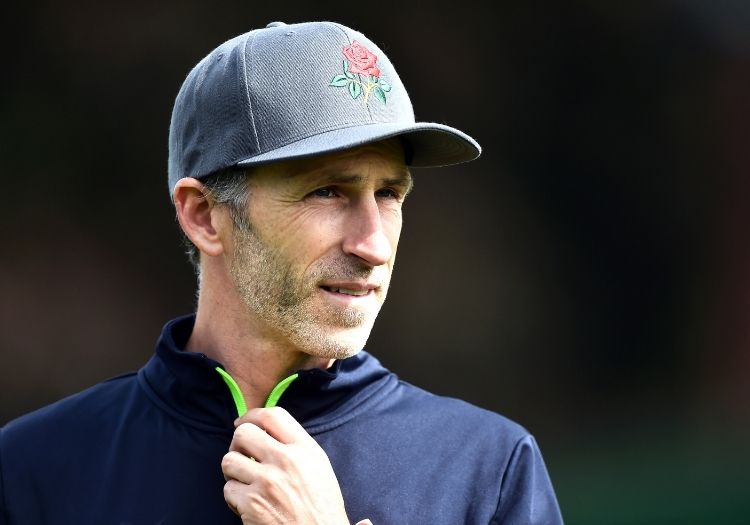 “Did I ever think I’d be in this position? Absolutely no chance,” Graham Onions says with a smile, conducting his first press conference as Lancashire’s new bowling coach from the strange comfort of his Emirates Old Trafford hotel room.

The former England seamer was forced to declare last August with a grand haul of 874 professional wickets, and he is genuinely chuffed with his new role. In these times – he points out – of slashed budgets and wider uncertainty, few will leave behind their playing careers and move into another role that suits them so tightly.

He calls himself “lucky” at least twice, but Onions has been preparing for this moment for some time, even if it came prematurely; a back injury picked up on the eve of the Bob Willis Trophy left him no choice but to hang up his well-worn bowling boots and hand over to a new generation of Lancashire seamers, now his students.

Onions turns 39 in September, but he qualified as a level four coach almost six years ago and, prior to this role, was coaching at Scarborough College, where he hopes to continue working one day per week, though his “number one priority now is to look after the first-team, the academy and the bowlers here”.

Speaking to The Cricketer in September, he hinted at what was to come: “I love the feeling of helping people – on and off the field.” The combination of injury difficulties and the trajectory of his own career has provided him with a natural position from which to empathise and assist young players on their own journeys.

Among his many talents and traits during a stellar playing existence, his work ethic was never in doubt. Indeed, in what was ultimately his final season as a professional cricketer in 2019, he bowled more County Championship overs than any of his teammates.

“The way I am as a person and the dedication I give towards everything that I do – from a cricket and coaching point of view – is I throw everything at it and give the best I possibly can,” he said today, sporting his Lancashire tracksuit on a dark, wet afternoon that made even the thought of the upcoming season feel somewhat distant.

“I'll throw everything at it and give it my best shot. I think the players understand that.” 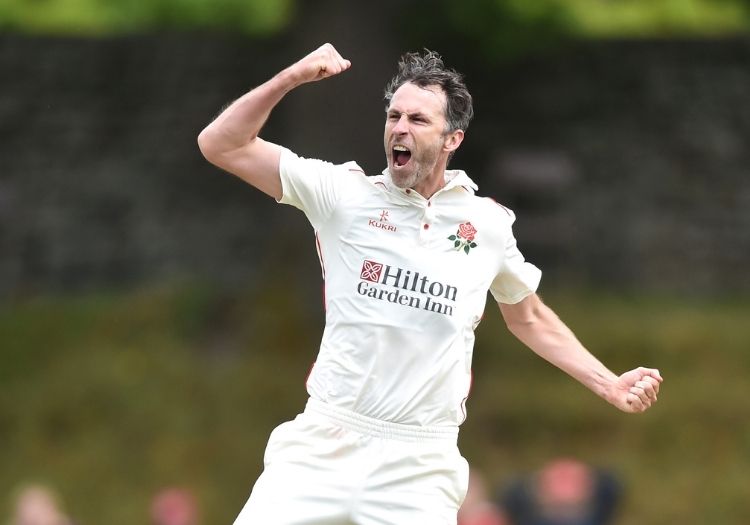 He acknowledges, too, that “there is a definite relief” in being handed the role at this time. He is fuelled by the camaraderie and mateship of a professional sporting environment, which disappeared with his retirement – replacing that void is such a challenge for so many. “That is where I feel as though I get the best out of me and as a coach,” Onions explained.

“I potentially could have had income coming in from different areas, maybe being self-employed and doing the coaching. That really isn’t me – I want to be part of a team.

“Being self-employed doesn’t get me out of bed in the morning, but if I can get up and be part of a team and help a team culture, then that’s what makes me think I want to be part of something special.

“There is a bit of relief because, first of all, I just want a job. But then, to have a job where I’m working with some incredibly talented players at Lancashire. I’m incredibly grateful. I’ll give everything I can to succeed.”

He is speaking from his hotel room because that’s part of the deal he has made with himself and his family.

His wife and children remain in the north-east and he has no plans to disrupt their lives and uproot; after all, he commuted between Manchester and Gateshead during his playing days at Lancashire. It means he will live out of the onsite hotel when needs be. “When I'm here I'm going to be working all the time,” he added. “I'm going to dedicate everything I possibly can to the players, which is great.

“We’ve spoken about it, and the amount of time I'll see the family is going to be less but the bottom line is I've done that for pretty much 20-odd years now so it’s nothing new, it’s the norm for me. When I see them, it will be even more special, I suppose.

“But I love this club. I've not been here that long, but I feel as though it is a second home and that I belong to the Red Rose, and I’m desperate to win more silverware and develop some of these young lads from the academy to be professional cricketers.” 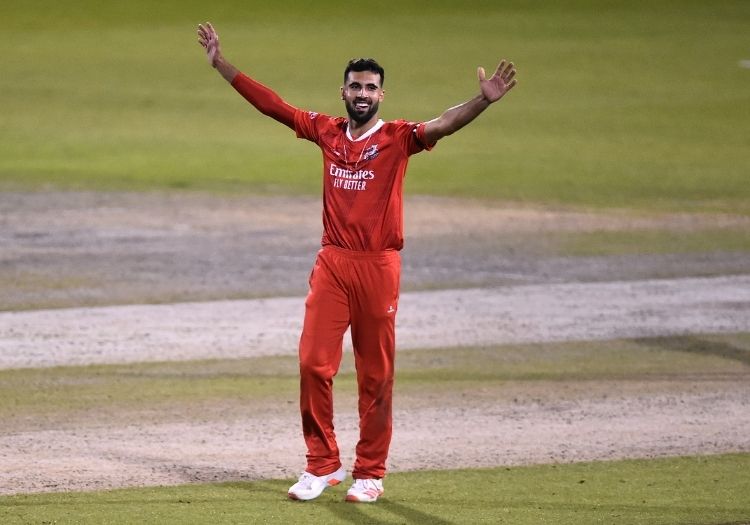 Saqib Mahmood is among Onions' charges under his wing

Among the bowlers at his disposal is Saqib Mahmood, currently in Sri Lanka with England, having spent much of his summer training with the national squad. Onions hopes that the need for a strict bio-secure bubble will have passed by the time summer arrives, allowing Mahmood to play for Lancashire regularly in order to force his claim for higher honours.

“He has to come and open the bowling for Lancashire and push himself as much as he can to try to force himself into that Test side,” Onions said.

“Is he good enough? Absolutely. Has he quite proved it yet? He’s still got a little bit of that to do. His white-ball cricket has been outstanding. With the red ball, you need to bowl 400 overs and take 60 to 70 wickets and you potentially force your way in.”

Mahmood, still only 23, is far from the only seamer now under Onions’ wing. Richard Gleeson and Tom Bailey were among his partners in crime in 2019, while James Anderson – a former England teammate – will represent a major shift from the crux of Onions’ work with some of the young talent coming through Lancashire’s system.

The end of Graham Onions, a serial wicket-taker who didn't realise how good he was

George Balderson, George Burrows and Ed Moulton all made first-class debuts in 2020, while Liam Hurt is 26 years of age but a latecomer in establishing himself at first-team level.

Luke Wood, who joined from Nottinghamshire ahead of the 2020 season, will view this year as a chance for a proper beginning, given the disruptions of last year, while Jack Blatherwick has also moved over from Trent Bridge in the off-season.

“I’m going to be working with those players and making sure that they’re competing against themselves to constantly get better,” added Onions.

If there is to be a learning curve at a county he knows well, it will come in understanding the difference between player-player and player-coach relationships.

“I think it’s going to have to change a little bit,” he admitted. “Celebrating wins and having a beer after game isn’t going to change because ultimately we’re in a team together and coaches work so hard to try to get the end results, so celebrating is really important. 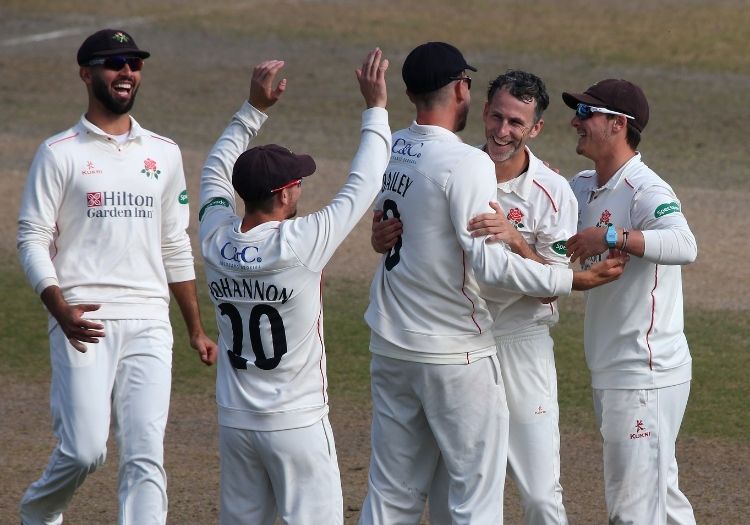 In what turned out to be his final season, Onions was part of the Lancashire promoted back to the County Championship's top tier

“We just have to make sure that I get the balance right. My philosophy and coaching style is very much getting to know the player and them knowing that I’m almost like the best friend and that they can come and ring me any time at all.

“But then also, they have to understand that there are decisions to make and team selections. There have to be honest conversations that you have with certain players. I don’t see that as a bad thing. Actually, I’ve found giving them feedback, they know it’s from a good place. That’s where I want to get to if I haven’t already got to.”

He has also had to learn to let go. Onions laughed as he recalled walking into training for the first time as a coach on Monday and immediately wanting to “get the ball in my hand and have a bowl”. After a professional career spanning almost two decades, that is hardly a surprise.

“Unfortunately, that isn’t going to happen as a player. But what I can do is try to take the positives of the news of being a coach full-time, and I can plough all my energy into still being part of a team.

“I’m delighted that I can now get over the real harsh reality and the tough times of thinking I wasn’t going to play again when I wasn’t quite ready to give it up, to putting it towards coaching. It’s been tough but now with the news and the lovely messages that I’ve had, I’m ready to go and I’m ready for the new challenges of coaching.”

Between himself and head coach Glen Chapple, the pair shared 2,247 professional wickets. They never played together in county cricket, but on paper their new partnership appears formidable; Onions, for one, can already sense their shared chemistry.

“I think the reason it's going to work so well is that he's constantly challenging and I love that,” he explained. “As a young coach, my job is to challenge young players to get better, his job is also to challenge me to be a better coach and produce some good players along my journey as a coach. I think that's great.

“Will we always agree with things? Only time will tell, and I don't think it's a bad thing if we don't. It's important that we have a focus and a drive to develop players and make them better but also players are in charge of their own destiny and their own journey.

“It’s our role now to be relatively young coaches with loads of enthusiasm to constantly push these players to get better all the time.”