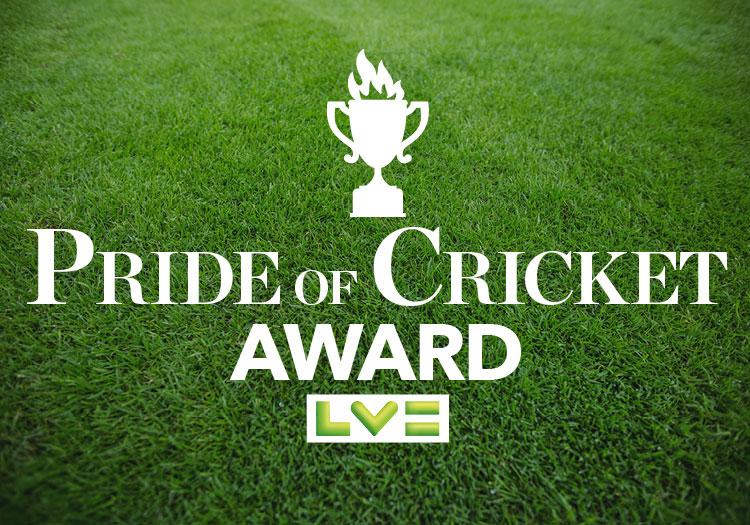 Dozens of entries were received for the LV= Insurance Pride of Cricket Award for 2021.

The Pride of Cricket Awards judging panel has whittled the entry list down to a shortlist of nine names.

VOTE FOR YOUR PRIDE OF CRICKET AWARD WINNER: CLICK HERE

Chris Weston played cricket for Caldy CC for nearly 40 years, and has continued to work tirelessly to provide the same opportunity for others to play and enjoy the game he loves.

Chair of Caldy from 1986 to 88 and president from 1991 to 1996, he became secretary of the Liverpool and District Cricket Competition (L&DCC) in 1996 and, after 26 years of outstanding service, retires at this year's AGM.

As secretary he has been a pivotal and instrumental figure in steering the league through numerous developments and initiatives, and many problems, during a time of great change. The result is an increase in participation amongst all types and levels of players across Merseyside, West Lancashire, Wigan, St Helens, Wirral and North Wales.

Chris carried the league through ECB Premier League status in 2000, and enabled the expansion of the league from 28 to 45 clubs, beginning with the merger with the Southport District League and Merseyside Cricket Competition from 2004 to 2008.

This was followed by a focus on junior cricket, bringing together junior leagues to create an all-embracing junior system with regional leagues, an annual winter player development programme for nearly 100 boys and girls, and representative cricket for the league's youngsters (boys and girls from under-11 to under-18) playing cricket all across Lancashire.

In recent times, the league has encouraged and financed the development of women's and girls' sections, now 30 and increasing, playing softball and hardball in local grouped competitions, with many now playing in the Lancashire Cricket Foundation (LCF) managed county-wide league.

Latterly Chris, as secretary, has focused on ECB-led issues, such as navigating the  committee and the clubs through the implications of Clubmark/SHMS; introducing general conduct regulations throughout the league and moving forward on EDI initiatives. During the Covid period his management of risk assessments and track and trace saw the L&DCC come through unscathed.

In addition Chris has been assisting the ECB with the sound running of the ECB National Club T20 competition since 2011, collating results and resetting fixtures for all rounds up until the final. This too, is his last year of involvement.

A colleague says: "His attention to detail is legendary and he is often in demand and is always willing to pass on his knowledge and experience to other leagues and cricket officials.

"Chris has impeccable organisational and leadership skills underpinning everything he does, which he does to enable thousands of individuals to play and enjoy the game of cricket, just like he did."

For the past 40 years Marcus has spent his winters organising up to 25 games per season for the wandering sides Captain Scott's Invitation XI and more recently Rain Men CC.

He's then spent his summers arranging, persuading and cajoling 11 players of varying ability to get to the right place at the right time with just the right amount of kit to Sunday fixtures in villages across southern England.

In all these 1,000 matches there may have been 100 wins and the same number of draws but 80 per of games have been lost.  So why does he bother, especially as he doesn't bowl and has a career best of 35?

Simply because he loves the game and those who play it.

He's a cricket romantic from the Neville Cardus mould - simply to play and talk cricket in the company of others of like mind is enough. The result of the game is inconsequential to the experience of doing it, talking about it and looking forward to it.

His love also shines through in his writing which has included "Rain Men," its sequel "Zimmer Men" and most recently "Berkmann's Cricketing Miscellany."

All are full of his whimsical view of the game and evoke sunny afternoons on village greens where its always 3 o'clock, 170 for 3 and the pavilion tea table groans under the weight of scones, sandwiches and cake.  Why he hasn't been invited on TMS is a great mystery.

Marcus also played nearly 200 games for Rain Men, specialising in the No.11 spot. A career aggregate of 368 runs at an average of just over 8 features a highest score of 34 and importantly a club record 58 not outs. He is equally proud of his 22 catches.

A teammate says: "Greater love has no man than he arranges cricket matches for his friends!

"Marcus Berkmann thoroughly deserves the Pride of Cricket Award. Being the modest man he is he'll hate me for saying so."

Cricket within the villages of West Dorset has almost disappeared within the last few years, while in larger urban areas there has also been declining participation.

West Dorset is remote, and the chance for any enthusiastic cricketer to progress (forming the building blocks of future club sustainability) was verging on non-existent.

He has arranged necessary funds, Saturday coaching throughout the year, introduced three age-group teams and seen through young cricketers of all abilities to ensure the future of Beaminster.

Recently, a further string was added to the bow, with the return of a second team for the first time in many years. Ross has been carrying out this work for 12 years, and as a result enthusiastic cricketers in West Dorset have a pathway in front of them.

Keith has played for and represented Little Hallingbury for most of his adult life.

Aside from a long and loyal playing career he has been a long-time treasurer and committee member, and has always been central to the club's wellbeing.

Perhaps most importantly of all, around 10 years ago, Keith kick-started Little Hallingbury's first colts training programme, addressing the issue that many small village clubs have faced in recent times - falling numbers of playing members.

At the time the club was considering dropping from two matches at a weekend (Saturday league and Sunday friendlies) to one, and may have struggled to sustain that.

What has followed has been an epic transformation as the colts age groups have filtered through to the senior sides, and as well as junior fixtures thriving throughout the summer, with indoor leagues at HECC in the winter, the Saturday and Sunday sides are often over-subscribed.

A clubmate says: "With similarly sized clubs struggling and even folding around us, I feel this is a real success story with a real hero at its core.

"We have a club full of grateful players, colts, parents and committee members who would vouch for my words here.

"This is my nomination for this valued Pride of Cricket Award, and he's certainly the Pride of Little Hallingbury Cricket Club!"

Andrew Major been an active member of Newdigate Cricket Club and Surrey's Colt Cricket system for over 35 years.

From a playing member in Newdigate's midweek side, he became chairman in 1998, a role he occupied for 16 years, finally retiring in 2014.

He is still an active coach with the club's juniors and ladies' side, served as an umpire for the 1st XI, playing member (where required) of the 3rd XI and is currently the curator of the square, where he takes pride in consistently producing quality cricket wickets.

Every week he can be found at the club, spending hours on the roller, watering the square and mowing the strips; whatever is required to get the wicket ready for the weekend.

Andrew was made president after leaving his role as chairman and continues to add value across all the playing sides at the club. He still sits on the committee and offers valuable insights from his years of experience within the club.

A clubmate says: "He would be a worthy winner."

Jim has been involved with Eastnor Cricket Club for over 40 years, taking on a lead role within the committee in order to keep the club going.

He has supported the club through tragedies, wins, and the building of two new pavilions as well as being heavily involved with the Marches League and more recently the Worcester County League.

A clubmate says: "Jim does not realise his importance to the players, young and old, and how much he is valued, respected and appreciated by all those he comes into contact with."

Jim has organised grants and negotiated ground rent at the same time as holding down a full-time job, and more recently being a carer for his late wife.

Even in retirement he does not rest, helping with the groundwork even more.

Over the years, he has occupied just about every role required in the running of a local cricket club.

Corfe Mullen is a small club that supports one Saturday side and two midweek sides, and teammates say that, without Nigel, 25 or so people would be without a place to play cricket each week.

Now, Nigel is readying his eldest son to take over and keep his legacy going.

Within East Anglia, if Mistley Cricket Club is mentioned, the first name that springs to mind is Robin Mills.

Currently the club secretary, Robin for almost the last 40 years has played, coached and administered Mistley CC through thick and thin.

He has routinely given all of his summers to the club, both by playing regularly but also by coaching the junior section and women's team.

Robin is described by clubmates as "the ultimate clubman" who will often spend his downtime at the club, doing the jobs no one else wants to do, and often the jobs which never get seen.