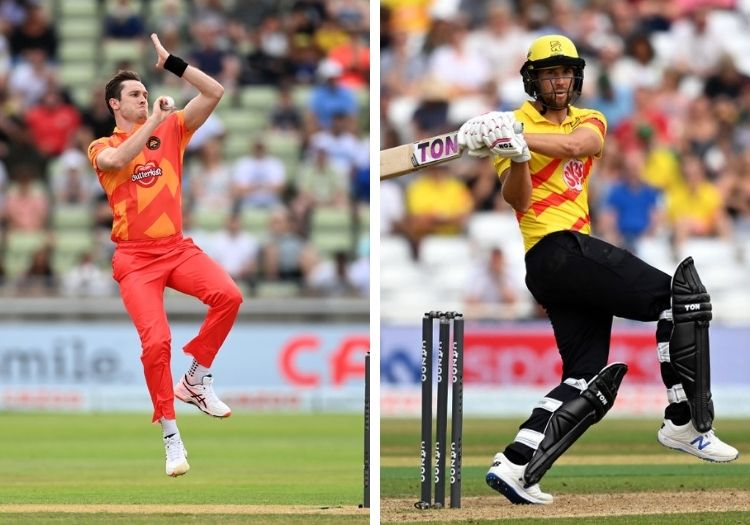 Benny Howell is one of the modern-day masters of bowling variation and arguably among the most underappreciated.

A self-described fast spinner/medium pacer, his arsenal includes slow balls, off-spin, knuckleballs and split-finger deliveries, and he’s used all of his weapons to good effect in the Blast. The 32-year-old has taken 131 wickets in 113 appearances in the competition to date, placing him 12th on the all-time list, and has conceded just 7.2 runs per over on average – an economy only Danny Briggs and Jeetan Patel can better among the top 20 wicket-takers.

Part of the beauty of Howell’s bowling lies in his action. He runs in to bowl with the ball at belly-button height, his left hand cupping his right to prevent the waiting batter from catching a glimpse of which weapon he has selected. And he deployed his mysterious bowling to good effect against Trent Rockets.

His first set wasn’t particularly noteworthy, bowling balls 26 to 30 and conceding four runs. His middle 10 balls, however, troubled Dawid Malan and Samit Patel who, despite scoring 12 runs, struggled to get the measure of his shower of knuckleballs and round-the-wicket deliveries. The Gloucestershire allrounder picked up a deserved wicket in his final spell, striking immediately upon his return to the attack to remove Patel and finish with figures of 1 for 23.

He wasn’t the only bowler in Phoenix orange to deliver a masterclass in variation, with New Zealander Adam Milne getting in on the act. However, where Howell uses a mixture of deliveries to bamboozle batsmen, Milne opts for a subtle variation of pace.

In fact, there is no better example of Milne’s talents than his final five deliveries. A renowned death bowler, the 29-year-old deployed a floated slow delivery and two pace-off knuckleballs to frustrate Rashid Khan and needle the Afghan allrounder into taking a big swing at the final ball of the set. It ballooned high into the sky and straight into the hands of the waiting Liam Livingstone on the boundary – Milne’s plan executed to perfection (Malan was also removed off the first ball of the set but that was more to do with a pinpoint throw from Moeen, credit where credits due etc.).

Another fine day at the office for Adam Milne 👏

They’re quite an odd couple, Howell and Milne, offering very different options from within the seam bowler bracket. Milne is strictly pace, threatening batters during the powerplay and at the death with 90mph rockets, while also chucking in the odd slower delivery to force an error. Howell is a trickster who would sit firmly in the crossover section of a seam and spin bowler Venn diagram and is thrown into the attack whenever something needs to happen, be it a wicket or an economical spell.

However, they currently have two things in common. One is their home stadium of Edgbaston, the other is their respective abilities to adapt to, and succeed in, The Hundred. And to be able to bowl the pair for 40 per cent of Phoenix’s innings, their commonalities will be making skipper Moeen smile.

After fielding the same 11 players for their opening three matches and coming away with one win and two defeats, Birmingham Phoenix made two changes to their XI to face Trent Rockets.

The first change saw opener Daniel Bell-Drummond replaced by 19-year-old Will Smeed, a very risky swap given the gulf in experience between the two players but one which paid off.

Bell-Drummond struggled with the bat in the first three matches, scoring just 32 runs at a strike rate of 88.88 while batting down the order at five. As an opening batter for Kent, pre-tournament expectations were that he would likely occupy a similar role for Phoenix, picking his moments during the powerplay while providing the experienced platform to allow the precious Finn Allen to demonstrate his penchant for boundaries. Alas, this proved not to be the case and Allen found himself partnering Miles Hammond, a player who while explosive, has struggled for form in the Blast, averaging just 18.5. The result? A trio of poor performances from Allen who was seeemingly caught in two minds between playing it safe and laying it all on the line.

However, with Smeed, who scored 283 runs at a strike rate of 134.76 for Somerset in the Blast, and Allen opening the batting, Phoenix appeared to be sending a clearer message: go out there and smash it about because we have experienced batting depth in Moeen, Livingstone and Howell while Hammond, bumped down the order, and Benjamin can offer explosive moments. And bat freely they did: a 60-run opening partnership including 36 runs off 13 balls for Smeed, a tournament best 43 off 23 balls for Allen and 12 boundaries combined (seven fours and five sixes). Expect the Allen-Smeed axis to open against Oval Invincibles on Wednesday.

The second change saw seamer Pat Brown replace wicketkeeper Chris Cooke, with Benjamin taking custody of the gloves. It was, on paper, a smart decision. Chris Cooke has not really performed of late as a middle-order finisher (a role which Howell or Benjamin can do) while Brown offers an additional bowling option to Phoenix’s shaky attack and is a player who has delivered solid death over variations a la Milne in the past.

The experiment didn’t quite come off. The Worcestershire bowler took a 16-run beating off his final set to finish with figures of 0 for 30, but prior to that, his bowling had been tight and testing for the Rockets batters. He should retain his place for Phoenix’s next match but their death over frailty remains a concern, as does Tom Helm’s expensive bowling. Perhaps it’s time to throw in wildcard Dillon Pennington and maybe experiment with a Howell-Milne tandem in the final 10 balls.

A frustrating half-century from Dawid Malan

It feels a tad odd to criticise a player for scoring a half-century and yet Malan’s 41-ball 51 felt like it flattered what had been a poor performance from the ICC’s number one-ranked T20 batter.

It’s become something of a trademark for the 33-year-old to start slowly before bursting into life and it was again his strategy against Phoenix. He scored just seven runs from his first 14 balls and experienced a 23-ball gulf between boundaries before accelerating in the second half of the innings to bring up his 50 (39 balls) with a box office six.

However, one can’t help but wonder if his conservative batting cost Rockets the win and their 100 per cent record, particularly after watching Phoenix chase down 145 off just 74 balls on a batting-friendly pitch.

Indeed, Malan scored just six boundaries – 4 fours and 2 sixes - from his 41 balls, soaking up 11 dots and running 23 singles before getting out off the 91st ball of the day, partially due to a bullet throw from Moeen but also because of his slow running between the stumps.

And it was this unwillingness to play expansively which possibly resulted in the wickets of his partners Alex Hales and Patel, both of whom were caught out attempting to bludgeon a boundary and get the scoreboard ticking. Patel, in particular, did the lion’s share of the work during his 47-run partnership with Malan, scoring 31 runs from 19 balls.

Ultimately, the scorecard will exonerate Malan of blame. After all, a half-century is a half-century and a couple of late boundaries did wonders for his strike rate. However, when the Trent Rockets team look back on the match in full, the analysis of Malan’s innings may not be so kind.