Play was called off after 39.4 overs on the opening day at the MCG after a number of deliveries struck batsmen thanks to uneven bounce from the surface 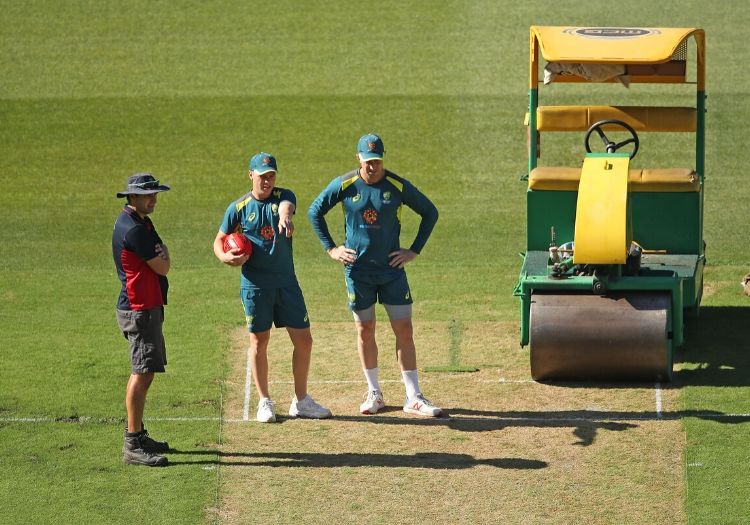 Play was suspended on the opening day of a Sheffield Shield fixture between Victoria and Western Australia after the Melbourne Cricket Ground wicket was described as unsafe by both players and match officials.

After losing the toss and being put in to bat, Western Australia players sustained several blows to the body from deliveries that displayed extreme vertical deviation after hitting the pitch.

Umpires Phillip Gillespie and Geoffrey Joshua took the decision to suspend play after batsman Marcus Stoinis was struck in the ribs by a short ball from Andrew Fekete, with match referee Bob Parry telling ABC Grandstand that the delay was "to give the curator a chance to use his equipment to improve the condition of the pitch".

The MCG is set to host New Zealand later this month for its traditional Boxing Day Test fixture, with a statement from Cricket Australia's head of cricket operations Peter Roach confirming that the board plans to work closely with groundstaff to ensure circumstances do not repeat.

"Matt Page and the MCG groundstaff have more than two weeks to ensure the Test surface, which is a different pitch strip to the one being used in this match, is of international standard," Roach said.

"The safety of our players is always our highest priority. The decision to suspend play and roll the wicket in an effort to address the variable bounce was the correct one and I applaud umpires Gillespie and Joshua for the decisive action taken."

🏏Play has now been called off for the day at the MCG!

Here some more examples of the uneven bounce WA batsmen had to deal with today.

The Boxing Day Test is 18 days away.

Drop-in pitches as used at the MCG have faced significant criticism in recent years, particularly following the Ashes Test of 2017. The wicket displayed little to no deterioration over the course of five days, resulting in a rating of "poor" by the ICC.

Page, who had previously worked as a curator at the WACA in Perth before starting in the MCG role shortly after that Test, had previously spoken about changes that had been made ahead of this season, including the removal of concrete from underneath the pitch cavities to bring conditions more closely in line to those at the Adelaide Oval and Perth Stadium.

"It is a more natural environment for the pitches to grow in and we're hoping it's going to give us a better result and enable us to roll out better pitches," Page told ESPNcricinfo.

"It should help the grass grow better. We should get stronger, healthier grass. But it's also enabled the pitches to go in, and they seem to be sitting a lot flatter at this stage.

"We'll be trying to produce something that gives the quick bowlers a chance upfront and then hopefully, we get the weather and we get some deterioration and give the spinners a chance at the end."

The visitors had reached 89 for 3 in 39.4 overs when play was suspended, and teams would not go on to return to the field despite clear weather conditions. Play is scheduled to resume as normal on the second day at 10am local time (11pm GMT).

However, Western Australia captain Shaun Marsh – who, like Stoinis, has also been tested for signs of concussion after suffering a blow to the helmet – said to ABC that he does not believe the condition of the pitch will have improved sufficiently to allow this.

"The wicket was very wet underneath and it was creating divots out there, which made the ball rise off a good length. As the game got in it got worse and worse out there," Marsh commented.

"I probably got hit four or five times, and we saw after lunch when the wicket got a little bit harder and there was a lot of divots out there it became unplayable.

"We saw guys getting hit on the head and it was disappointing. At this stage, I can’t see us getting back on."