NICK FRIEND: The last player to score 1,000 first-class runs in English cricket before the end of May was Graeme Hick, in 1988. Bedingham, with a story to tell of resilience and adversity, might just have an outside chance of being the next 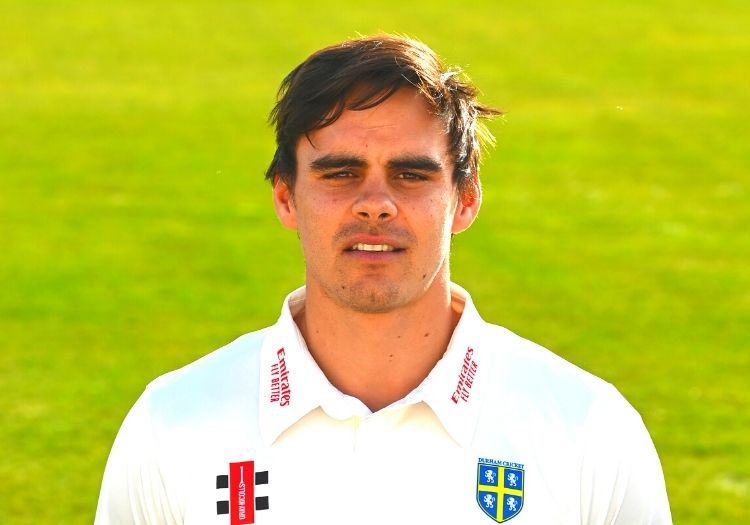 David Bedingham is relaxing on a rare day off. Rare, because since the County Championship began three weeks ago, Durham’s South African overseas player has spent most of his waking hours on the field.

Until now, he hadn’t been familiar with Graeme Hick’s record, much vaunted but seldom troubled in the last 32 years. Hick remains the most recent of the eight men to have achieved the rarity of 1,000 first-class runs in English cricket before the end of May; he reached the mark in 1988 and circumstances – namely excellent batting surfaces, persistent sunshine and a competition pushed to the margins of the summer – mean that perhaps this next month provides the greatest chance in recent times for someone to buck that trend.

Enter, Bedingham: 565 runs at an average of 141.25 in three games, and two big hundreds – 180 against Nottinghamshire, 257 last week against Derbyshire. When he added a second innings half century to that double ton, he ensured a place in the history books: no Durham player has scored more runs in a single first-class game. Indeed, nationwide only Haseeb Hameed, on the back of his twin vigils at New Road, has faced more balls since it all kicked off on April 8.

He is realistic, however. “I don’t play for targets and that kind of thing,” he explains. “I’m thinking about the next game against Warwickshire. Hopefully, I can keep scoring runs. If 1,000 runs come before May or in August, I’ll be quite happy with that achievement.

“We’ve played on have been pretty good wickets and, if you throw in a good winter where I’ve worked quite hard and if you throw in some luck and a lot of concentration, the runs just come.

“My mindset has maybe changed a bit. Last year, I was in the bush for three or four games where I felt like my game was in a bad place. This year, I have probably accepted that in different parts of the season there will be dark patches and that sort of thing.

“At the moment, I’m seeing the ball quite well, so I have to really cash in. Rather than scoring eighties, nineties and small hundreds, it’s about keep focusing and cashing in to score big hundreds. That has probably been my mind shift, rather than getting to a hundred and playing shots and losing my wicket.” 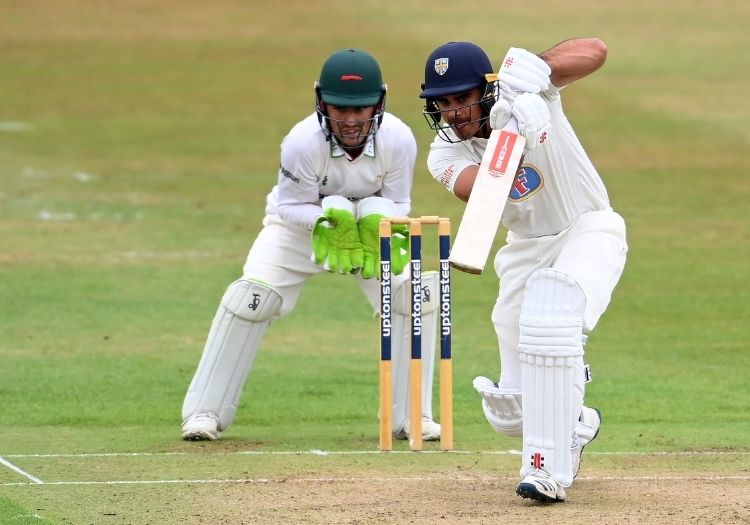 When the season began, he set himself an initial marker of 900 runs in his first full campaign after the disjointedness of the previous year, aware that the early stages might take some getting used to for a Cape Town boy living outside his comfort zone. Besides, as far as the stereotype goes, it takes a brave batsman to seek out Chester-Le-Street as a new home, with its seamer-friendly reputation and its bitterly cool spring days. Given his fast start, though, that figure might now need readjusting.

“At the start of every season, I set myself goals: run targets, average targets, life goals and cricket goals. But when I go into the game, it is just about the here and now.”

That philosophy has been built on personal experience. When Bedingham talks about “life goals”, he reflects candidly on a car accident five years ago that has provided him with valuable perspective.

“I know that cricket is our job, but I realised that in life cricket is actually really, really small,” he says. “I try to look at it as something that we’re lucky to be playing for a living. If you score no runs, it happens. It’s just cricket, it’s not life. I just try to put myself under less pressure. Since the accident, I’ve done okay, so I’m going to try to have that attitude for the rest of my career.”

It was December 5, 2016, when Bedingham – still then at Stellenbosch University, studying finance after converting from accounting – fell asleep at the wheel of his car on the way back from a golf day in the sweltering heat and crashed into a truck. He didn’t play cricket again for over a year as he recovered from injuries to his femur, hands and jaw.

Even to this day, his movement is still affected in the leg that he broke. “I’ve never been a quick guy,” he laughs, “but I used to move a lot better than I do now. It limits me moving to one side quicker.”

It takes an impressive willpower to have come through that adversity. There was a time when he wasn’t sure where it might leave his dreams of a professional career. “I just thought that I’d play cricket at club level and enjoy it with mates. I didn’t think I’d be playing for Durham or for the (Cape) Cobras.” 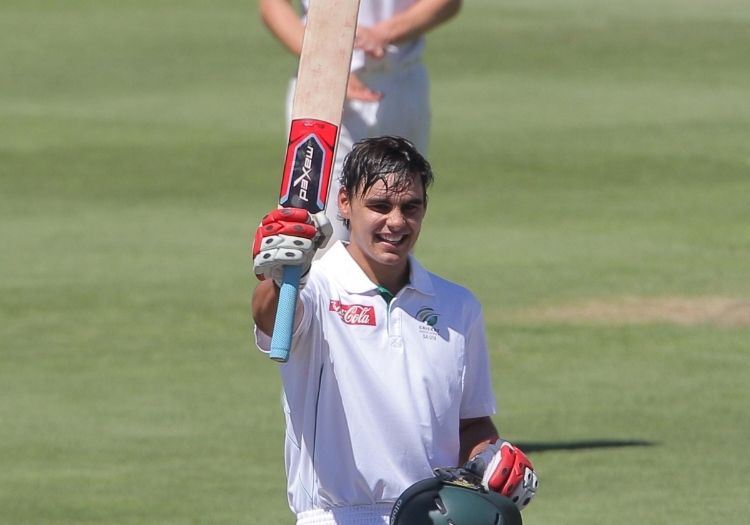 Bedingham made a hundred for South Africa Under-19s against England

But something changed with the accident, and perhaps the freedom afforded by this introspection has allowed him to grow into the player of today. Having previously been on the periphery of the first-class game in South Africa, he became a more consistent run-scorer, averaging 52.66, 47.35 and 52.37 in consecutive years, in which time he made six hundreds and seven fifties.

“It was five years ago, but I feel like since then – and I don’t know what’s happened – I’ve put less pressure on myself. Since the accident and since I started playing again, I’ve been lucky enough to score some runs. The accident happened during university and things just changed. I don’t know why, I don’t know how. Just how I played, I started scoring runs. I didn’t think that I would be a professional cricketer while I was studying, but I’m glad I am.”

His red-ball career average of 50.16 is exceptional – a decent imitation of Jacques Kallis, his childhood idol as a fellow alumnus of the same Wynberg Boys’ High School. “I’ve always liked him and admired what he did. But for me, I don’t try to copy anyone. I just try to be me.”

That healthier, more holistic approach has been a vital catalyst in Bedingham’s progression. In effect, sport is no longer everything. In a 2019 piece with SA Cricket Magazine, he explained how he had come to learn that if cricket weren’t to work out, then he would be “smart enough to pursue a degree or get a job”.

In 2013, he was not yet at that point. Following a century for South Africa against England in an Under-19 Test, Bedingham struggled in the aftermath. “I thought things would happen and would progress quicker,” he recalls.

“But playing first-class cricket was a lot tougher than I originally thought it would be. I went off the boil a bit and I wasn’t scoring runs. I was putting way too much pressure on myself.”

Among his teammates in that side was Kagiso Rabada, while England lined up at Boland Park with Dom Sibley, Ben Duckett, Ed Barnard and Olly Stone. Four months later, he signed up to play club cricket in the Nottinghamshire Premier League for Plumtree, turning out alongside Matt Milnes, now of Kent. He reflects on that time as an important lesson, not so much on the field as away from it: “I think being with good people and learning the culture and how English people go about their lives and cricket, I think that played a bigger part than the actual cricket. I feel like I grew up quite a bit.”

As he settles into life in the Newcastle suburb of Jesmond, that sentiment has extended itself to his new home. “I have found it very cold at times,” he jokes, “but the people are very friendly and welcoming, very hardworking and honest people.”

All of which has helped to cultivate Bedingham’s current sense of satisfaction. Things are easier now than they were last year, when he arrived in the United Kingdom in February just in time for the onset of a global pandemic. For four months, he sat alone in his flat, new to both city and country, “which was really tough and crap actually”.

He knew teammates Brydon Carse and Gareth Harte through contacts back home and both lived nearby, but the majority of his human interaction came while running. In a video interview with Durham from last October, he revealed that those difficulties brought on alopecia caused by stress and anxiety.

“I think mentally this year has been a lot easier,” he says, with his girlfriend having since joined him. “Last year, I moved to a new country and was expecting to play consistently from April to September. Obviously, we only started in August.

“To have someone over with you who you have a lot in common with, mentally off the field it has been a lot easier. I think that has had a big part to play in the form I’m in now.”

Inside the mind of Chris Dent, consistently one of the country's best cricketers

He has already doubled last year’s run-tally in two fewer innings; he was solid then but unspectacular, playing without the additional burden of overseas status, registered at the time on an ancestry visa through the birthplace of his grandparents rather than on a Kolpak deal.

Now, as one of two overseas players, Bedingham will soon be joined by Cameron Bancroft, while New Zealand batsman Will Young has been deputising for the Australian in these early weeks of the summer.

He insists that such a tag has had no bearing in the last three weeks: “I don’t want to put pressure on myself by saying I’m the overseas pro or that type of thing. I want to be myself and try to do as well as I can.

“I don’t try to think about those things. As soon as I start thinking like that, I put myself under more pressure. I like to be calm and chilled out and hopefully in a good enough space to score runs. Luckily, that has happened so far.

“When Durham said that I would be their overseas player, I was just glad to have a job. I thought I’d probably have to go back to South Africa, so I’m glad that they gave me the chance.” 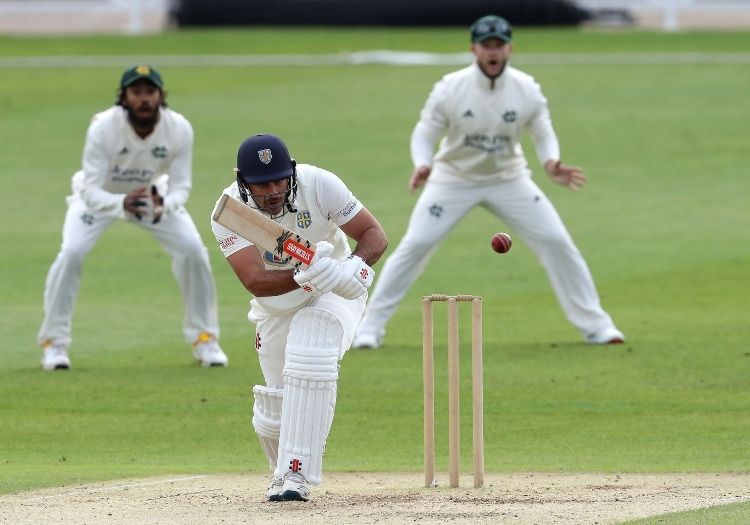 Bedingham is grateful; he would be among the first to admit that he is one of the lower profile imports in the county game this year, though conversely the value to his club of a consistent, imposing run-scorer in the middle order – available all season long – cannot be overestimated.

He was named last week in Western Province’s squad as part of the revamp to the domestic structure in South African cricket; his departure from the system when he was initially unveiled as a Durham player had caused Ashwell Prince, his Cobras coach, to criticise Cricket South Africa’s handling of players like him and bemoan the loss of a genuine talent approaching his prime.

So, what of the idea one day of a call-up to the national side? “At the moment, I’m just trying to take it one game at a time,” he says. “Whatever happens, happens. I just try to do my best in every game I play.

“Opportunities like that are really cool and if they come up one day, then perfect.”

For the time being, then, the focus is on the next game. Life has taught David Bedingham not to look too far ahead. And at the moment, it could hardly be going much better.