Match times, streaming information, tickets and travel, team news, head-to-head record, weather forecast, prediction, and everything else you need to know ahead of the Vitality T20 Blast match 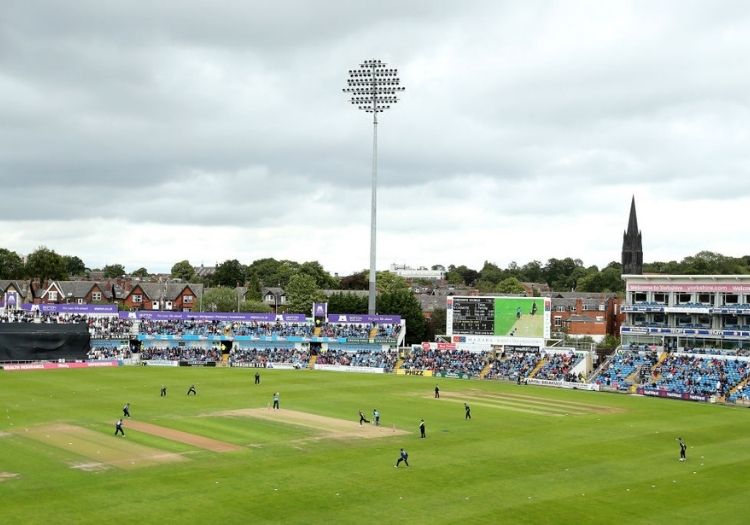 Yorkshire, previously perennial underachievers in the shortest format with just two Finals Day appearances from 18 attempts, have flown out of the blocks in the North Group. They host a Northants side who are in the opposite position; despite having won the competition twice in the past, they currently occupy the basement spot despite victory over Lancashire on Friday (June 25).

The solace for Steelbacks fans may be found in the fact that that claimed a win in emphatic fashion against a Durham side featuring Ben Stokes. Having been set 158 to win at the Emirates Riverside on Wednesday evening, Northants belied their winless status at that point to breeze to a total of 125 before they lost their first and only wicket, and ultimately to their target with more than two full overs to spare. Backed up by the success against Lancashire and this might be a side on the turn.

However, the Vikings will be an unquestionably tricky proposition to negotiate. There may have been questions as to whether their early season form was sustainable following England’s calling-up of four premier members of their team, but they emphatically put those to bed with a recent win over Worcestershire. Despite having been reduced to 15 for 4 in the powerplay, a stunning blitz saw them amass an unbroken sixth-wicket stand of 141 from the final 55 balls of their innings to set a target of 192, and the Rapids fell just short on 179 for 5.

The continued flow of talent out of the side - Tom Kohler-Cadmore's injury has robbed them of another batter - finally appeared to make a difference in the loss to Leicestershire Foxes as the team lacked power hitters in a failed pursuit of 208 to win at Grace Road.

The Steelbacks’ successful chase at Durham was anchored by an unbeaten 78 from opener Ricardo Vasconcelos, and the South African-born batter is enjoying a fine season. Vasconcelos’ opening partner and Northants captain Adam Rossington also made his first half-century of this year’s Blast in Chester-le-Street, providing a beacon of hope for the Steelbacks after a tough start with the bat.

Overseas all-rounder Mohammad Nabi’s off-breaks secured the wickets of Stokes and David Bedingham on Wednesday, with fellow spinner Graeme White also picking up two scalps of his own. White has now taken the joint-most wickets for the Steelbacks in this season’s competition, level on seven with seamer Tom Taylor.

Yorkshire’s stunning turnaround in the second half of their innings against Worcestershire was driven by young batsman Harry Brook, who, having been in Yorkshire’s red-ball side for the past four seasons, is now wasting no time in demonstrating his big-hitting ability. Brook muscled an unbeaten 83 from 54 balls and was partnered by another youngster, Jordan Thompson, who scored even more quickly, smashing 66 not out from just 28.

Although he will remember the Worcestershire clash for his efforts with the bat, Thompson’s all-around ability is underlined by the fact he has been among the wickets this season too. Lockie Ferguson, who has made pace with him, is rapidly coming to the fore as a shrewd acquisition at Headingley.

Yorkshire's Tom Kohler-Cadmore has a broken finger. Will Fraine is suffering from a side strain. Joe Root is not available as he re-enters the England bubble. Adam Lyth will captain the team. Adil Rashid, David Willey, Jonny Bairstow and Dawid Malan are also away with England. Mark Stoneman is available after joining on loan from Surrey.

The sun is predicted to break through the overcast west Yorkshire sky in the early evening meaning this game should be played in pleasant conditions, around 20 degrees Celsius.

Keep up to date with the MetOffice's rolling forecast for Headingley: Click here

TV/stream: The ECB are offering a streaming service which can be found here. A live stream is also available on yorkshireccc.com

Digital: The Cricketer will carry live scorecards and daily updates from every Vitality T20 Blast match in 2021, as well as the latest breaking news from around the counties and exclusive features. Visit our County Hub for more.

Tickets are sold out.

At Junction 2 of the M621 follow the signs for Headingley stadium along the A643. These signs will lead you along the Leeds Inner Ring Road A58 to the A660 which is signposted to Skipton and Headingley Stadium. Signs along this road will indicate you have reached the Headingley area.

All routes into Leeds from Bradford, Keighley and other northern areas lead to the Leeds Outer Ring Road, the A6110 – A6120 – A63. Along the Outer Ring Road signposting to Headingley Stadium will lead you to the A660 Otley Road and from here southwards to the Headingley area.

Parkings: Check the latest information with the club, given Covid-19 restrictions.

By train: Headingley is served by three stations.

Leeds Station: Headingley is around a 10-15 minute drive from Leeds City Station. A taxi should cost around £8-£10.

Headingley Station: Headingley Station is on the Harrogate Line and is a 10-minute walk from the ground. Please note that the initial part of this walk is slightly uphill. Trains run half-hourly from Leeds Station and should take around 12 minutes.

Burley Park Station: Burley Park Station is also on the Harrogate Line and is a five-minute walk from the ground. Trains run half-hourly and should take around five minutes. If travelling from Leeds Station this is your recommended station to use.

By bus: The following services operate from the city centre towards Headingley.

Stand Y10 opposite the Central Library

Stand Y14 opposite the Combined Courts

Despite Yorkshire continuing to haemorrhage players, they remain a force to be reckoned with in this competition. They should have too much for Northants. Home win.