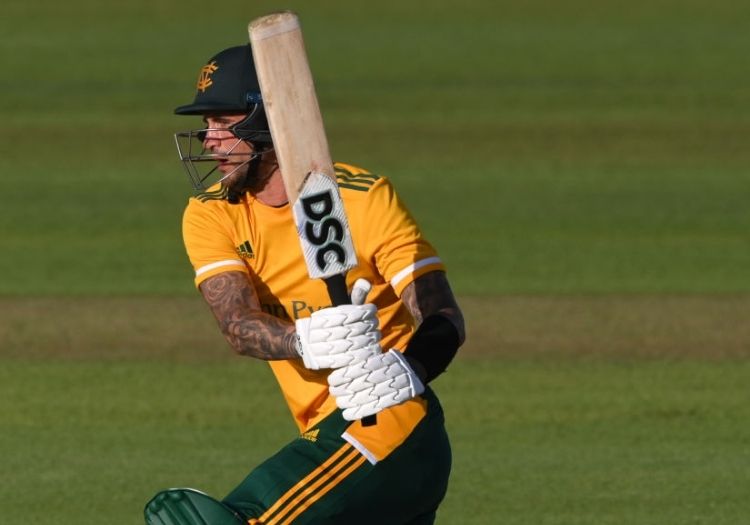 Following a dramatic tie between these two powerhouses of domestic T20 at Old Trafford less than a week ago both sides remain in the hunt for a top-four place. An ultra-competitive North Group means another repeat of last season’s first semi-final will be as keenly fought in Nottingham as it was in Manchester.

That tie was the Outlaws’ second of the campaign, having also finished level with Worcestershire in their opening game, but even without Dan Christian, they look as fearsome as ever. They exacted their revenge on Worcestershire with a win at Trent Bridge on Tuesday for which the adjective ‘crushing’ barely seems appropriate. After restricting the Rapids to their joint-second-lowest T20 total of all time, a miserly 86 for 8, the chase was completed inside seven overs and with all 10 wickets in hand.

Having added a third tie to their record against Derbyshire Falcons, though this time as they stared down the barrel of defeat, provided another remarkable chapter to a rollercoaster of a campaign.

Lancashire were flying in their pursuit of 173 to beat Notts last Sunday, reaching 118 without loss inside 13 overs, but a late fightback from the Outlaws saw them lose four wickets and ultimately fall just short of victory. The extent to which that failure to get over the line will hang over the Lightning on Sunday remains to be seen, and having won just once in four completed games up to that point, and a statement win would be welcome.

But it would be fair to observe that the performance that ended in the seven-wicket loss to lowly Northamptonshire was Lighting's worst performance of the season, extending their winless run to form as they run into the defending champions.

There were many architects of Notts’ flattening of Worcestershire, but one of the most influential was Samit Patel. The all-rounder, now in his 20th season at Trent Bridge, returned the most economical four-over spell in the history of the T20 Blast, with figures of three wickets for just four runs. He was well-backed up by opener Alex Hales, who emphatically completed the job with an 18-ball half-century.

Hales and opening partner Joe Clarke form one of the most vaunted pairings in the Blast with both already having hit north of 200 runs in the competition this year. Meanwhile, it is not Patel but another internationally-capped bowler in Jake Ball has snared the most wickets for Notts this year, and the tall right-armer continues his explosive return from injury, also claiming three victims against Worcestershire.

If Hales and Clarke form one feared opening partnership, then Keaton Jennings and Finn Allen make up another for the Lightning. Jennings’ 88 from 61 deliveries in his first T20 appearance this season very nearly steered Lancashire home last Sunday, while 22-year-old New Zealander Allen has taken to his first spell in the Blast like a duck to water.

Leg-spinner Matt Parkinson will be key for Lancashire in combatting the Outlaws’ explosive top order. There was also an impressive return in the reverse fixture for seamer Danny Lamb, who returned figures of 3 for 23 from his allocation.

Saqib Mahmood returned to the Lancashire side for the game against Northamptonshire Steelbacks after an abdominal injury. Richard Gleeson remains sidelined with a back issue.

After an indifferent start to the day, the mid and late afternoon brings with it plenty of sunshine and clear skies.

Keep up to date with the MetOffice’s rolling forecast for Nottingham: Click here

There are plenty of parking options around the Lace Market and the Ice Arena in the town centre. There are three car parks surrounding the ground, and two further down the Bridgford Road into West Bridgford itself.

By public transport: Nottingham station is well linked by East Midlands Trains, Cross Country and Northern. There are regular buses from the station to Trent Bridge, and a taxi rank on the northern side of the station, but it is only a 20-minute walk via the A60 - passing the nation's only Hooters - or better still along a saunter the Nottingham Canal up to the Trent Bridge itself – past Meadow Lane (Notts County), the City Ground (Nottingham Forest) and plenty of pubs.

Another thrilling contest beckons between these two well-matched sides but the reigning champions are in the better form. Home win.