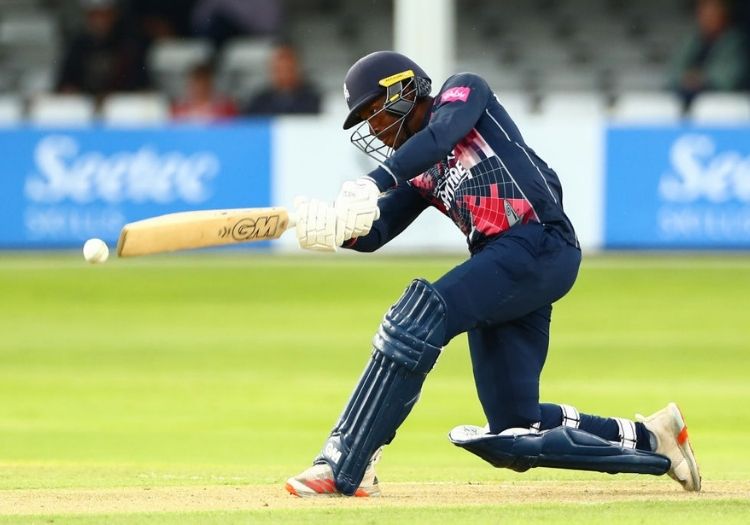 Sussex are down on their luck. After starting the 2021 Blast with three consecutive wins, the Sharks lost three matches to the weather before suffering a 27-run defeat at the hands of Glenn Phillips' Gloucestershire.

They nearly returned to winning ways against Surrey on Sunday, posting 43 for 1 off their opening 4.5 overs in pursuit of 176, only for play to stopped one ball shy of the five-over 'match' threshold due to bad weather. Being well ahead of the DLS rate at this stage, Sussex were understandably frustrated.

Kent are soaring in the South Group, winning six of their first eight games, and on current form, a first Finals Day since 2009 looks well within their reach. This clash has a feel of 'immovable object meets irresistible force' about it; although Kent adore batting first, with all six of those victories coming when they had first use of the pitch, Sussex love to chase.

Tymal Mills continued his fine form with the ball against Surrey, collecting 3 for 21 from his four overs and collecting the crucial wickets of Will Jacks and dangerous middle-order man Jamie Overton. Mills is the Sharks' leading wicket-taker with nine wickets in 17 overs and an economy of 7.35. Will Beer (1 for 26) also looked sharp against Surrey.

With the bat, Luke Wright added a further 20 runs to his name against Surrey, taking him to 128 runs at a strike rate of 162.02 in three innings. Phil Salt has a team-leading 193 runs, including two half-centuries, but hasn't scored higher than 20 since Sussex's second match of the season.

Daniel Bell-Drummond is Kent’s leading run-scorer this season with 258 runs after eight matches, and recently made his third fifty of the season against Essex on Friday night. Zak Crawley has belied his position as a solid England red-ball player to blast a strike rate above 160, with Jack Leaning and youngster Jordan Cox also having put up impressive totals.

Former Nottinghamshire quick Matt Milnes removed Essex’s Will Buttleman in his first over on Friday, and followed it up with the scalp of Michael Pepper to cement his position at the top of Kent’s wicket-taking charts. In addition, Leaning, although primarily a batsman, has picked up four wickets with just the six overs he has bowled so far, offering skipper Bell-Drummond something a little different when he needs it.

Mitch Claydon is added to the Sussex Sharks squad from the controversial washed-out game against Surrey. Chris Jordan has a groin strain which is being assessed

Kent have named an unchanged 14-man squad from the visit of Somerset to Canterbury.

Keep up to date with the MetOffice’s rolling forecast for Hove: Click here

Tickets for Sussex Sharks versus Kent Spitfires are available.

Parking: There is very limited parking at the ground for Sussex Cricket members and those with disabled parking permits on County Championship matchdays.

Please note there is no parking available for all other matchdays including.

There is a public car park, Norton Road Car Park (BN3 3BE), located a short walk West of The 1st Central County Ground opposite Hove Town Hall (charges apply between 8am and 8pm). For further information, click here.

By Train: Hove Railway Station is a 10-minute walk from the ground. Leave the station and head south on Goldstone Villas, at the bottom of the road turn left onto Eaton Road. Cross over The Drive continuing along Eaton Road, The 1st Central County Ground will appear on your left-hand side.

Brighton Railway Station is approximately a mile and a half from the club. There are regular rail services from Brighton Station to Hove Station. There is also a taxi rank located just outside Brighton Station, together with a bus terminal.

By Bus: The No.7 bus runs past the North (Cromwell Road) end of the ground with several stops near the ground. This service is the George Street, Hove to Brighton Marina service and serves both Hove and Brighton Rail Stations. This bus runs approximately every 10 minutes and around every 15 minutes on Sundays.

The 21 & 21A Brighton Marina to Goldstone Valley service stops outside the main entrance to the ground; these are less frequent but do run through the central Hove and Brighton areas.

For up-to-date information on these services and for detailed route map information, click here.

A tough call - Kent have won six of their eight matches, Sussex have been unlucky to lose four of their matches to the weather. The form of Tymal Mills might edge it for Sussex, home win.