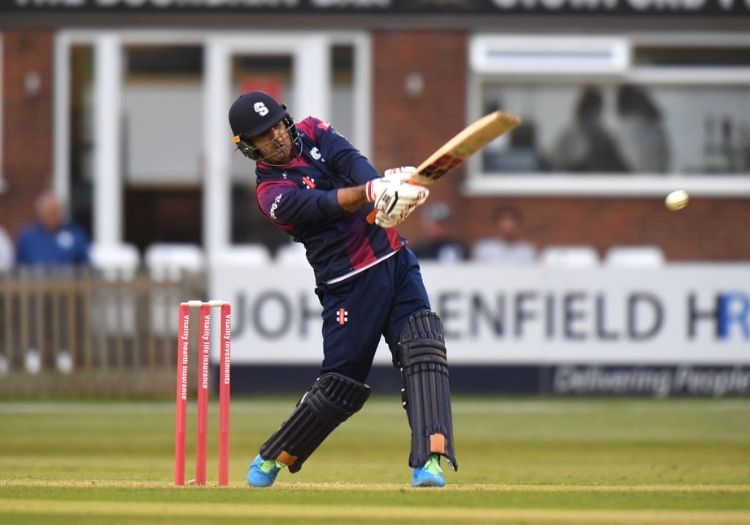 Both sides come into this fixture having had their winning streaks brought to an end over the weekend. Leicestershire were unbeaten in three matches before Worcestershire Rapids openers Brett D'Oliveira and Riki Wessels put on a record partnership to help their side chase down 157 with one ball to spare.

Northants, meanwhile, travelled to Headingley on June 26 off the back of victories against Durham and Lancashire Lightning. However, they were no match for Yorkshire Vikings' duo Jordan Thompson (74 off 35) and Dom Bess (3 for 17) who steered their side to a compelling 82-run victory.

Victory for Northants would lift them off the bottom of the North Group table while two points would see the Foxes draw level with sixth-placed Lancashire and move them to within one win of the top four.

Lewis Hill was the pick of Leicestershire's batsmen against Worcestershire, scoring 59 runs from 33 balls to almost single-handedly lift his side from 47 for 4 to 153 for 7. The wicketkeeper has 143 runs at a strike rate of 144.44 in seven innings. Josh Inglis remains top of his side's batting rankings with 306 runs, followed by Scott Steel (257) and Aaron Lilley (254). However, the trio scored just 40 runs combined against Worcestershire and will be hoping to build some substantial partnerships against Northants.

Naveen-ul-Haq impressed once again with the ball against Worcestershire, taking 1 for 28 and conceding just six runs off his death over. He now has 15 wickets for the season while Callum Parkinson, who took an economical 1 for 20 in Sunday's match, has 12.

For Northants, Mohammad Nabi was the only bowler not to take a beating against Yorkshire, finishing with figures of 1 for 23 from his four overs. The Afghan veteran has three wickets in five appearances and has conceded just 124 runs in 20 overs. Graeme White and Tom Taylor top Northants' bowling standings with eight wickets apiece.

Nabi has also impressed with the bat, scoring 83 runs at a strike rate of 125.75 from the middle-order and hitting an unbeaten 27 (19 balls) to take Northants to victory over Lancashire. Rob Keogh (50 v Leicestershire), Ricardo Vasconcelos (78 not out v Durham), and Adam Rossington (59 v Durham) have each scored a half-century in one of Northants' past three matches, suggesting more runs can't be far away.

No change yet again for Leicestershire.

Josh Cobb is back in the Northamptonshire squad.

Keep up to date with the MetOffice’s rolling forecast for Leicester: Click here

This match is sold out.

By car: The Uptonsteel County Ground is approximately three miles from the M69/M1 Junction 21.

For satnavs, the postcode LE2 8EB will send you to the main entrance on Curzon Road.

Parking: Check with the club before travelling as normal operations may be affected by Covid-19 restrictions.

By bus: To explore the local bus options and plan your journey, click here.

By train: The Uptonsteel County Ground is approximately two miles from Leicester Station.

Northants were well and truly humbled by Yorkshire on Saturday -  a team Leicestershire have beaten in the past few days. The Foxes also won the reverse fixture in Northampton by 34 runs. Home win.