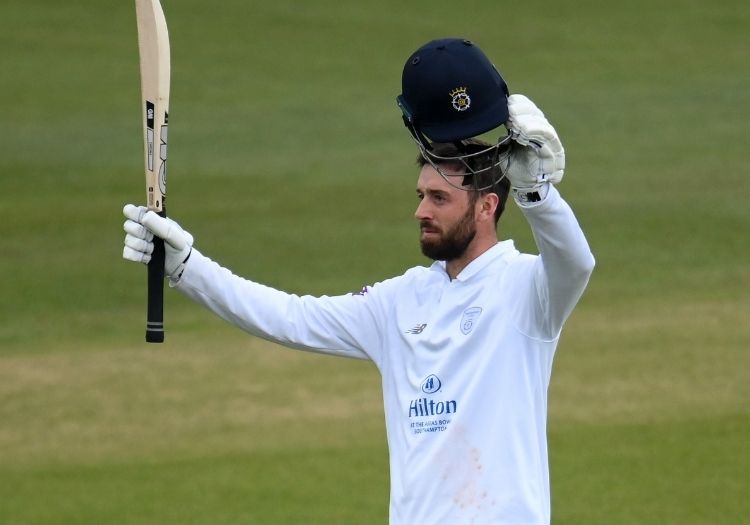 A blistering century from James Vince put Hampshire in charge of their LV= Insurance County Championship match with Kent at Canterbury.

The hosts closed on 289 for 3 on a day when just two wickets fell in stark contrast to the 12 dismissals on day one of this County Championship Division One clash with Lancashire going into day three with a handy 37-run lead.

England hopeful Bohannon finished unbeaten on 142 alongside his skipper Dave Vilas who made 39 not out as the pair put on 55 unbeaten runs for the fourth wicket after Luke Wells had earlier made a well-constructed 59. 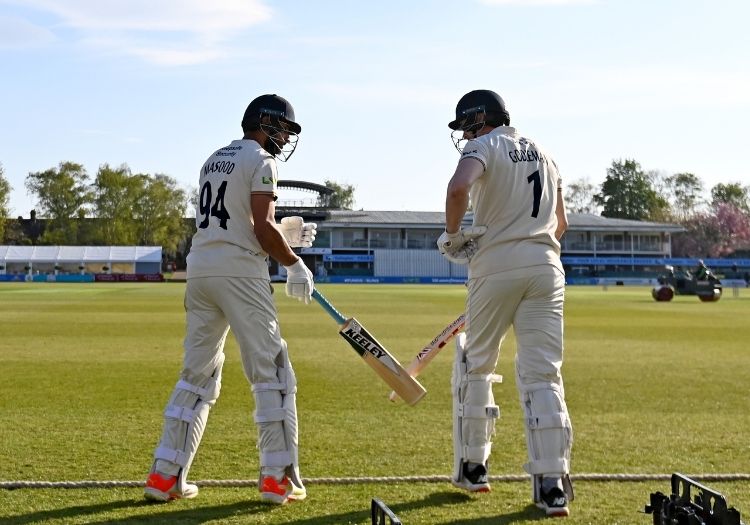 Adam Lyth and Dimuth Karunaratne shared an opening partnership of 73 as Yorkshire seized control of their County Championship game against Northamptonshire.

The pair quickly built on their side's first-innings advantage of 92 at Wantage Road, having bowled Northamptonshire out for 204 as rookie allrounder Matthew Revis and off-spinner Dom Bess shone with the ball.

Revis – who began his career as an opening bat – took 3 for 45, his best first-class performance, while Bess tied up one end for most of the afternoon, returning miserly figures of 2 for 31 from 22 overs.

Emilio Gay produced some classy shots to top-score with 65, but Northamptonshire were unable to contain their opponents in the final session, with Lyth (41 not out) extending the White Rose lead to 177 as they closed on 85 for one.

The Oval (second day of four): Somerset 337, Surrey 204-5 - Surrey trail by 133 runs with five wickets remaining in their first innings

Ben Foakes rallied Surrey with 63 at the Kia Oval as the County Championship's early pace-setters replied with 204 for 5 to Somerset's 337 on day two of a hard-fought Division One contest.

Ollie Pope also made an attractive 47 from 72 balls, in an 80-run fourth wicket partnership with Foakes, while Sam Curran scored 44 not out in his first knock of the season following a stress fracture in the back that had sidelined the England allrounder for six months.

But Peter Siddle struck an important blow for Somerset when he had Foakes caught at second slip from the last ball of the 59th over, leaving Will Jacks to keep Curran company for 10 more overs until play ended for bad light at 6.20pm with 4.5 overs of the day's allocation unbowled.

Along with Matt Lamb (71, 140 balls, ten fours), the wicketkeeper ensured that Essex would start their second innings under serious pressure - which soon told as, given three awkward overs to bat before the close, they lost Nick Browne, to reach stumps at nought for one. 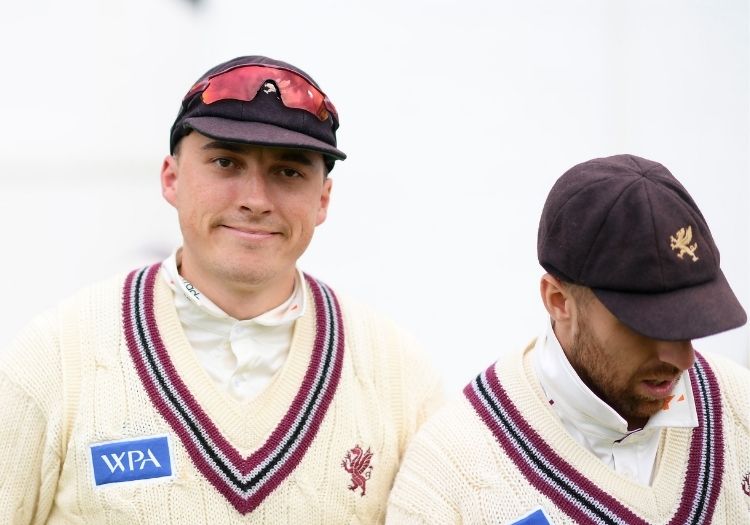 Unbeaten centuries from Ben Slater and Lyndon James have provided Nottinghamshire with a dominant platform against Durham on day two of their County Championship Division Two clash at the Riverside.

Slater was imperious from the start of the day to the close on 164 not out, reaching three figures for the first time in a year in first-class cricket. James played an equally impressive knock to notch his maiden first-class hundred, with the two players sharing an unbroken stand of 216 for the fourth wicket, handing their side a lead of 141 runs to take into day three over the hosts.

Matthew Potts claimed figures of 3 for 88 on a difficult day for the home side on a placid pitch, whose thoughts will not have to turn to saving the match over the final two days of the contest.

Middlesex took a complete stranglehold on their County Championship match against Glamorgan in Cardiff as the home side finished 104 for 6 in their second innings, still 110 runs behind.

An undefeated John Simpson hundred and a fifty from Toby Roland-Jones meant that Middlesex made 336 all out to give them a 214-run lead on first innings. James Harris finished with the best bowling figures for Glamorgan, claiming 4 for 68 against his former county.

When it was Glamorgan's turn to bat things unfolded much as they had in their first innings with the top order failing once again in the face of some excellent Middlesex bowling. 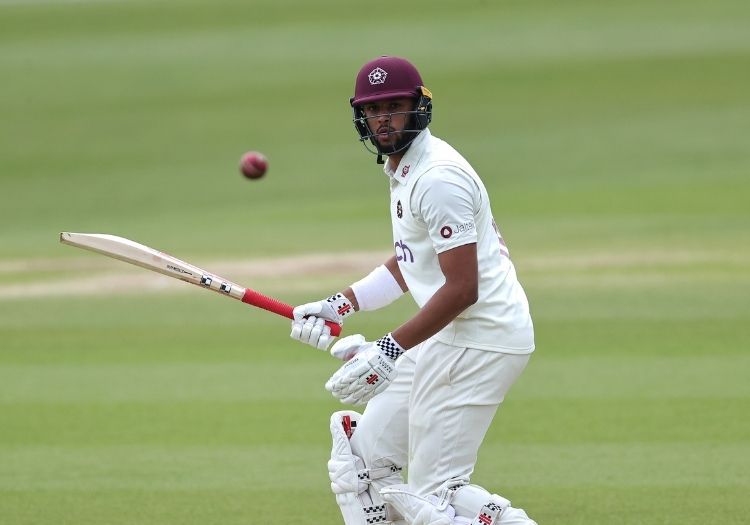 Pakistan international Shan Masood became the first player in Derbyshire history to post back-to-back double centuries as Leicestershire's bowlers were put to the sword on day two of the County Championship match at the Uptonsteel County Ground.

The 32-year-old opener was out for 219, having hit 24 fours and a six as Derbyshire racked up 401 runs in the day to lead by 224 with six first-innings wickets still in hand. Wayne Madsen made 94 and Mattie McKiernan is 63 not out.

Masood's magnificent innings followed his 239 in last week's drawn match against Sussex, giving him an aggregate of 611 runs from his first four innings for Derbyshire, another county record.

Left-arm spinner Callum Parkinson finally claimed his wicket this time, bowling him with a ball that turned sharply from outside the left-hander's off stump. Masood turned for the pavilion but could leave the field only after every Leicestershire player, led by Parkinson, had offered a handshake of congratulation on a superb exhibition of high-class batting.

Worcestershire club captain Brett D'Oliveira continued his prolific start to the 2022 campaign with an unbeaten 169 on day two of the County Championship match with Sussex at New Road.

Then his predecessor as captain, Joe Leach, picked up three wickets in seven balls late in the day to put Worcestershire in control as the visitors, despite an unbeaten 85 from Cheteswar Pujara, closed on 169 for 5.

All-rounder D'Oliveira batted for seven and three quarter hours in total and was the bedrock of his side’s 491 all out spanning 136.5 overs.

It means D'Oliveira is still to be dismissed this summer and three innings have yielded a total of 294 runs.

Leach then caused havoc late in the day with the wickets of Tom Clark, Mohammad Rizwan and Jamie Atkins in an inspired spell to leave Sussex still 322 in arrears.