The Analysis: Wyatt and Wellington star for Southern Brave 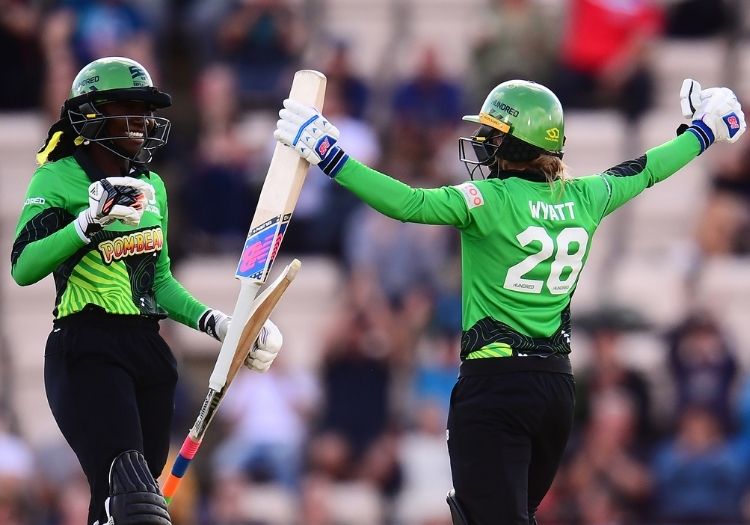 Wyatt back to her best

It hasn’t been plain sailing for Danni Wyatt in the last couple of years, but there are few better sights in the women’s game than the England opener hitting inside out over the off-side. Her problem at international level in recent times has simply been that bowlers have become wise to her strength, targeting her with inswingers back through the gate and towards her off-stump.

At the Ageas Bowl, however, there was no such threat. At one stage, she had six from six deliveries a quarter of the way through a daunting run-chase, but she caught up emphatically, giving herself room – as it her trademark – and splitting the fielders at point and cover on two occasions, hitting over the top of them twice more and clearing long-off for six against the seamers of Georgia Elwiss, before ending proceedings with a huge hit over square leg.

So out of form not long ago, she looks somewhere near her very best now; her series-winning display for England against India at Chelmsford earlier this month might just have come at the best moment possible.

First, it was Katie Mack. Then, it was Erin Burns. At the third time of asking, have Birmingham Phoenix finally settled on an opening pairing?

Eve Jones has looked in pretty good nick ever since her Hundred campaign began with 47 against London Spirit. And she made the most of her promotion to the top of the order, helping Shafali Verma to lay the foundations for a substantial total against the spin-heavy attack of Southern Brave, even if it was proven to be insufficient in the end.

Pedestrian stands of 21 and 22 in their first two games led to mediocre scores, but the Jones-Verma partnership included nine boundaries in 45 balls and set the tone for a far more complete innings, even if it faltered towards the back end when a score upwards of 150 looked likely.

More important than the identity of the opening duo, though, was the position of Amy Jones, by a stretch Phoenix’s most in-form batter. For the first time in the competition, she came to the crease at No.3 – a far more logical plan than shunting one of the tournament’s most destructive players down to No.5, as happened in Phoenix’s opener. But even so, there were just 55 balls remaining when she strode out to the middle.

The quandary of how best to utilise their England gun surely has a seemingly straightforward answer: get your best player to the top of the innings and give her the opportunity to face as many balls as possible. But Jones has been revitalised at international level since dropping down into the middle order; and as captain, the decision is hers.

When her chance came, she looked in splendid nick, walking across her stumps at one juncture to flick Lauren Bell for a one-bounce four. She ran out of balls in the end, walking off unbeaten on 42 with a strike rate comfortably higher than that of her teammates.

The absence of several A-List overseas players from the women’s competition has undoubtedly been a disappointment, given the prospect of watching Ellyse Perry, Meg Lanning and Beth Mooney in action. But what it has meant in return is a greater responsibility on the likes of Amanda-Jade Wellington, the 24-year-old leg-spinner who last turned out for Australia three years ago but – on this form – must be pushing Georgia Wareham for a recall.

In three games thus far, she is yet to be taken even at a run a ball, with her 60 deliveries costing just 55 runs.

Despite the presence of bigger names – Smriti Mandhana, Stafanie Taylor and Wyatt are all huge players for Brave – Wellington has been a fundamental figure.

She bowled 10 straight deliveries from the 41st to the 50th, accounting for Verma and Eve Jones in a cracking spell, including a perfect set-up to dismiss the latter.