Whatever happened to… Phil Slocombe?

Phil Slocombe played for Somerset during the mid-1970s and early ’80s: the Botham/Richards/Garner era. He is now in the wine industry as a trader 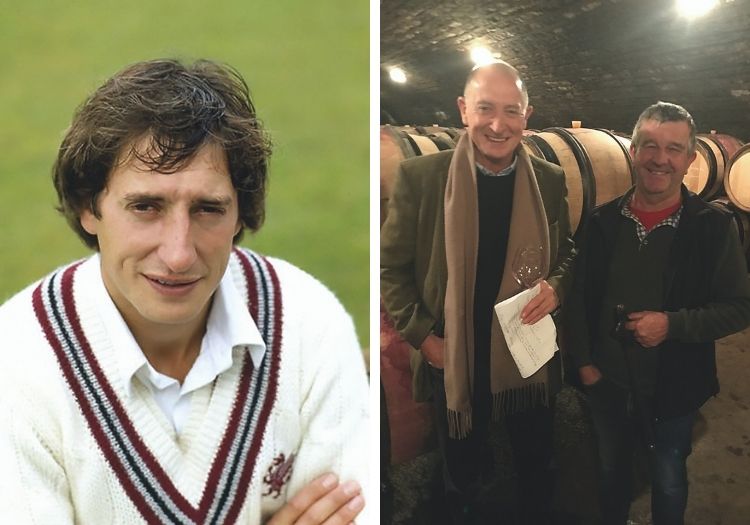 (Above right: Slocombe with Eric Rousseau in the cellars of Domaine Armand Rousseau in Gevrey Chambertin, Burgundy)

How did you become a wine trader?

In 1984 I retired from cricket and found myself in the USA for five years with my then wife, Susan, who was an interior designer and an antiques dealer. We moved to France and found an old mill which we converted into a hotel and restaurant. I started going into the markets with our chef and also going to the vineyards to taste some wines. I enjoyed going to Bordeaux but the real find was when I went to Burgundy: that was utterly compelling. I was able to drive there and spend time with the wine producers, got to know the areas pretty well. We sold the hotel and from 1995 onwards I was able to concentrate on wine trading. I started off in France and moved to London in 2009.

What does a wine trader do?

I found that it was easier to trade in fine wine, the top end, because there were journalists already writing about it so I didn’t have to travel anywhere to find out about it, or taste the wine to see how good it was. You could buy the wines that I had I got to know the UK wine trade pretty quickly, the main dealers. I kept my own direct allocations from Burgundy, I had my contacts from the restaurant, they continued to work with me as I developed my private client base. I take clients over to Burgundy and Bordeaux a couple of times a year, we’ll taste at various chateaux and they can see how the grapes are brought in.

What do you enjoy the most about it?

Every vintage is different. Burgundy is enigmatic at best. Quality controls have increased in the last 20 years, so there’s a consistency now that wasn’t evident in the 1970s and ’80s, when it had an iffy image. The pinot noir grape for the red wine is a delicate grape, and it’s amazing how many vintages, in the noughties, have been saved by the warmth of September.

In 2008 Burgundy producers were scratching their heads in mid-August, wondering if they’d ever produce anything. Suddenly we had this wonderful Indian summer and it saved the vintage. It’s fascinating. You’re reliant on nature and so much can happen during the growing season – rain, hailstorm, temperature variations. Then there’s this stressful part of September. Then it’s get the grapes in and see what they have.

Has your ex-Somerset colleague, Ian Botham, sampled some of your wine?

When I bumped in to Ian a while back I found out very quickly he likes a more structured, masculine, robust style of wine. Not so much Bordeaux or Burgundy, more the Spanish and Australian wines.

Were you a wine lover when playing?

In those days all we could afford was a Mateus Rose with steak and chips. I only started to enjoy wine when living in France.Some of the players used to enjoy drinking wine, but I wouldn’t say that many of us knew that much about it.

Are you still involved in cricket?

Since I’ve been back in England I’ve been to the Test matches. There has been a hole really. I’ve missed it and I love watching it.

The fitness and quality of the fielding has changed beyond all recognition. Watching them throw a ball, at a low height, straight into the keeper, the diving and catching. The one-day game is drawing the crowds, there’s renewed interest in cricket, wonderful. But I wonder if there’s a bit too much one-day cricket, particularly when Test batsmen cannot occupy the crease for long periods of time.

My mother and brother still live in Weston- super-Mare so I get down there; I’m still a country member at Burnham and Berrow Golf Club and have been to the players’ dinner for the last couple of years.

Any regrets from your cricket career?

A lot of frustration in the last part of my career, not being able to break into the one-day side. I meddled with my technique and it didn’t exactly enhance my career. I was frustrated with myself, having had quite a promising start in the first five years.

Anything you’d do differently in retrospect?

So many of us were home-grown, so to come up through the youth sides and play for your county was a really big thing. To move from Somerset would have been a huge step. If I’d have moved counties in 1981-2, I might have given myself a second chance, I don’t know. But I wanted to be part of Somerset. We were a winning side, it was marvellous and a privilege to be part of that era. And being a very small cog in that wheel was terrific.

On the pitch we were winners, so we had a certain confidence and we were recognised. In the early days, 1974–75, we felt we’d achieved something if we qualified from the Benson & Hedges zonal matches. But those years laid the foundation. Brian Close was captain and installed more discipline. We had Tom Cartwright who was a brilliant coach. He got Ian [Botham] to bowl so well. And there was a transformation. On the back of the success we got more and more crowds. There was a cauldron of excitement and warmth. Wherever we went coach loads of supporters would follow us around. There was a great rapport between the supporters and team. A lot of synergy.

Do they try to get you to drink cider when you go down to watch?

I take bottles of wine with me. I had a bad experience with a certain brand of cider when younger. Even now I can’t go near it. A good red wine does me more good.