Facing up: Chris Tremlett on the influence of his father, Robin Smith and Shane Warne

"He is the biggest inspiration throughout my career. I wouldn’t have got where I did without his influence. He was hard on me, but in a good way..." 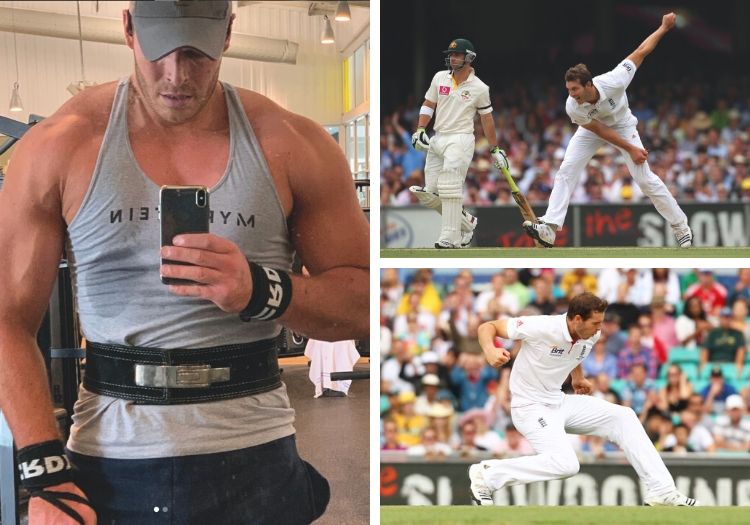 Was it difficult following in the footsteps of a famous father (Tim) and grandfather (Maurice)?

Thinking back to when I was 10 or 11, in the county age groups, Dad had just become Hampshire coach, and there were a few kids saying I was only being picked because of him and my grandad, and the Tremlett name. That was annoying, but it made me determined to prove that I deserved to be there.

Did your father coach you?

Dad was an accurate seamer and batted everywhere from 1 to 11. He also played for England A. We did squabble, and I was a bit stubborn, but I knew he was trying to help me, and watching him from the sidelines inspired me. I went into the Hampshire dressing room and met Malcolm Marshall, who was friendly, and Robin Smith, who I later played for! I liked the Sunday League games and the coloured kit.

How did you break into the Hampshire side?

I went to a comprehensive which didn’t have the facilities, so it was great to go in the Hampshire nets and bowl at senior players. I was a batsman until 15 but shot up in height, like Stuart Broad. Dad was honest, he said: “You’re not a bad batsman, but if you want to make it, you need to work on your bowling, get more pace”. At 17 I was picked up by Hampshire’s academy – I learnt a lot, became fitter, each month got a bit quicker, working with Jon Ayling, Mark Garaway and Tony Middleton. I made my debut at Portsmouth in 2000 against New Zealand, took six wickets and was given a contract.

How was playing for the Judge?

Good fun. He was a tough player – I loved his big battles with Curtly Ambrose and co. Towards the end of his career, when I started, it was ‘Happy Hampshire’. The guys liked to drink and I had come from this academy, where I was fitness-driven. My Championship debut was at Southgate in 2001.

There was rain forecast on day one. I turned up at the hotel and wanted an early night. Robin knocked on the door and said, “You’re not going to bed, you’re having a few drinks with us.” I was a shy kid and most of the Hampshire team were over 30. It was a steep learning curve! It was great to learn off Robin, he’s a lovely guy. I know he’s had his troubles but I think he’s in a good place now.

And then there was Shane Warne…

That was interesting! He is the biggest inspiration throughout my career. I wouldn’t have got where I did without his influence. He was hard on me, but in a good way. I wasn’t naturally aggressive. He was Australian and played with the greats though, and he wanted to instil some of that in me. He saw great potential in me – he wanted me to express myself more, with my body language: put my shoulders up; he knew I was charging in, but he said: “Look as if you are.” It was what I needed as a 23-year-old. Most of the guys just sung my praises, but he said: “No, this is what you need to do to get to the next level.” Three or four years with him set me up for the 2010/11 Ashes. 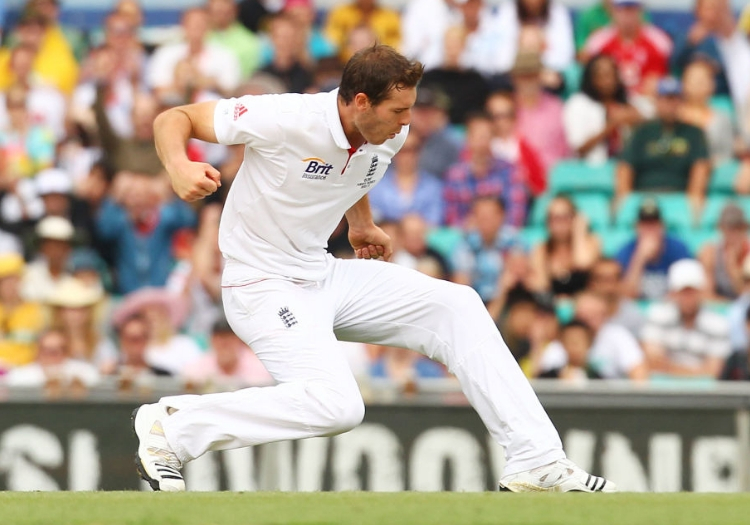 Tremlett played in 12 Tests for England

Was joining Surrey a tough call?

Yes. In 2009 I was bowling OK but felt my position in the first team was being questioned for the first time. I felt stale: seeing the same old faces, same old members. Something needed to change. I bowled well in the Friends Provident Trophy final against Sussex, 90-odd mph. I loved that big stage. Michael Brown had gone to Surrey and was enjoying it. He asked if I’d move, so I met Chris Adams. Hampshire signed Kabir Ali, and let me go with two years of my contract left. I still loved Hampshire but needed a kick up the arse. In terms of getting back in the England side it worked.

Did you enjoy your Surrey stint?

On the whole yes, except for the injuries, and losing Tom Maynard, which was terrible. It was nice to meet new players. I’d like to have played a bit more T20 in front of crowds of 20,000 but Surrey wanted to save me for four-day cricket. In that era it was all about Test cricket.

You have a fine Test record…

My call-up for my first series in 2007 was a surprise. I hadn’t had an amazing summer, but I bowled well at Sachin Tendulkar and co for England Lions at Chelmsford, a little quicker than Broad but I didn’t get as many wickets. We had a middle session at Lord’s. Allan Donald was England bowling coach at the time, said I looked potent. I bowled well in three Tests. Stuart then did well in the one-dayers and I didn’t get picked again for a while as Steve Harmison and Matthew Hoggard returned from injury.

I was 100 per cent fit and at my best. I wasn’t sure I’d get picked as well as Steve Finn and Broad, who were also tall bowlers, but I got the call, and it was fantastic. There was the bootcamp in Germany, where unfortunately Jimmy Anderson and I managed to hurt each other boxing, but it helped me integrate into the set-up. It was a great tour – we won practically every game including warm-ups, and had a wonderful team spirit. My chance came at Perth. If there was ever a pitch for me…

I took eight wickets although we lost. All those pitches were great to bowl on, get the nick and it flew to the slips. I’d played in the one-dayers in 2006/07. Although we won that series, England were whitewashed in the Tests. We copped it from the crowd: it wasn’t nice. In 2010/11 the Aussies got on our side a bit, against their own!

I got on with Shane Watson and Michael Clarke from Hampshire, but on both those tours the teams didn’t speak to each other until we had a beer at the end of the series. I got to know Ricky Ponting at Surrey. He was a lovely bloke. But playing against him, you thought “this guy isn’t so nice”. In the 2013/14 series, I only played the first Test and the rest of the time I ran on the drinks, but David Warner was still giving me stick!

'It was ‘Happy Hampshire’. Robin knocked on the door and said, ‘You’re not going to bed, you’re having a few drinks with us'

There was the amazing Test at Cardiff. We bowled them out in 24.4 overs. Then there was the Rose Bowl. I’d been booed playing for Surrey there in 2010. That was upsetting. In 2011 with England I did well, with a five-wicket haul, and got a big cheer. I have a plaque there now!

In 2007 I was a fringe player, and didn’t feel as wanted by senior players. I felt on edge. Peter Moores forced us into two-hour training sessions. In New Zealand I had a side strain. Michael Vaughan said: “I need you to prove your fitness and show how tough you are.” Despite the doctor telling me not to, I played through a sidestrain and a grade 1 tear became grade 3. I had to go home.

Looking back it was stupid, I was in tears it was so painful. But in 2010 it was better. I’d known Jimmy since the England academy and bowled well with him. I was older and had been through the mill a bit more. I knew my body and game. Andy Flower then Trevor Bayliss had trust in the players that they knew what they had to do.

You spoke in support of KP…

I knew KP from Hampshire, and always got on well with him. He was a scapegoat in 2013/14. There might have been things I didn’t see, but there were plenty of others to blame. The management wasn’t in a great place. Graeme Swann going home crushed morale. We were 3-0 down with two Tests to go, and no one wanted to be there. KP isn’t afraid to say what he thinks. He just said what everybody was thinking.

Did cricket leave you wealthy?

What do you do now?

Tom Jewell (ex-Surrey) set up an online estate agency/lettings company, called The Home Cloud, and I went in with him. We source properties for investors, and build buy-to-let residential portfolios for businessmen, cricketers and companies. I still love cricket, but it’s been nice to do something different. I may try coaching again at some stage. I still follow the international stuff – I like going to a Test, but prefer T20Is on telly. 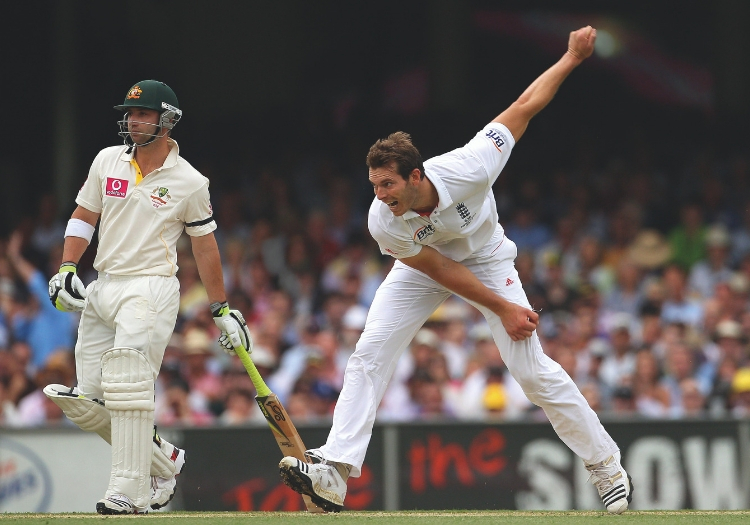 How is the body after those injuries?

I had pain throughout my career, even from a young age. I had injections in my back four or five times a year. In my thirties I found I had a rheumatoid joint problem. I still struggle with that. It affects my eyes sometimes. I played a Test against Pakistan [Dubai, 2011/12, the only one he didn’t take a wicket in] and I could only see out of one eye! Even now there are times when I can’t put my socks on.

Clearly you love the gym…

My body was always letting me down as a player. I wanted to see if I could change it in a certain way, play around with it. I just enjoy it. I’m not a bodybuilder. I don’t stand on stage in Speedos! Last year I was a couple of stone heavier at 22, was eating 8,000 calories a day. It’s hard to eat that much – you have to compress it into shakes, adding peanut butter, nuts, oats and so on, seven meals a day. I don’t really run as my back and knees don’t like it.

Do you hope your son Theo (1) plays cricket?

I won’t force him and I’m sure my fiancée will want him to try other sports too. He does seem to love playing with red balls though so it looks as if it might come naturally!

Craig David. He went to the school down the road in Southampton. All my friends knew him. I loved his first album.

Donald Trump, just because you wouldn’t know what was going to come out of his mouth. He is fascinating.

Game of Thrones, although I was a little disappointed at the finale.