THE POWER LIST 2019: The Cricketer counts down the 50 most influential people in English cricket

The countdown includes players, administrators, politicians and journalists, and was put together following a detailed discussion of more than 100 possible names by our expert panel... 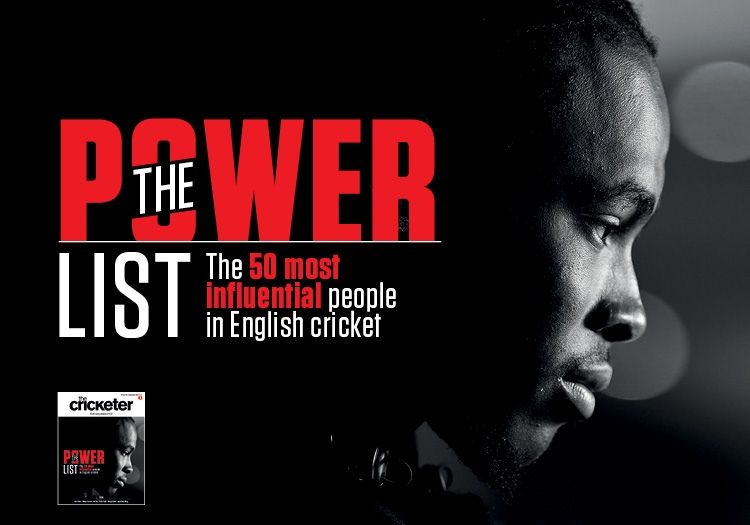 After a sabbatical in 2018, The Cricketer’s Power List returns this autumn, charting the top 50 most influential people in English cricket.

The countdown includes players, administrators, politicians and journalists, and was put together following a detailed discussion of more than 100 possible names by our expert panel - which this year included ESPNcricinfo senior correspondent George Dobell, cricket writer and analyst Jarrod Kimber and The Cricketer editor Simon Hughes.

The criteria for entry is varied, and does not necessarily hinge either on position or reputation in the sport.

There are household names - England captains Joe Root and Eoin Morgan and Radio 1 DJ Greg James - and some who you may be coming across for the first time.

At No.21, for example, is the chairman of the ECB’s Recreational Assembly, Jim Wood, who has been pivotal in the engagement of Minor Counties in the first-class game and represents the voice of grassroots cricket.

There are some notable omissions, too.

The soon-to-be-knighted Geoffrey Boycott fails to make the cut, for instance.

Figures with heavy involvement in The Hundred’s conception and delivery feature prominently, as do the television and radio executives whose job it is to push the sport to the masses.

And after their respective years on the pitch, it is hardly a surprise to see both Ben Stokes and Jofra Archer featuring as well.

“This magazine first ran the Power List in 2016. It caused quite a stir,” editor Hughes said.

“Boardrooms, commentary boxes and media centres around the country were abuzz with smug, dejected or nonplussed inhabitants corwing, or carping, about their relation to their colleagues.

“More than one journalist demanded to know why they hadn’t been included.

“It prompts the usual argument with the suits claiming ‘we finance and organise the game’ and the players retorting ‘without us there would be no game!’

“What is power. It is largely subjective, of course.

“It is not just about corporate muscle or numbers of Twitter followers or the guy with the most medals. More subtle influences are at play here too.”

The Cricketer’s 2019 Power List features in the September issue of the magazine, in all good newsagents from Friday, September 20.