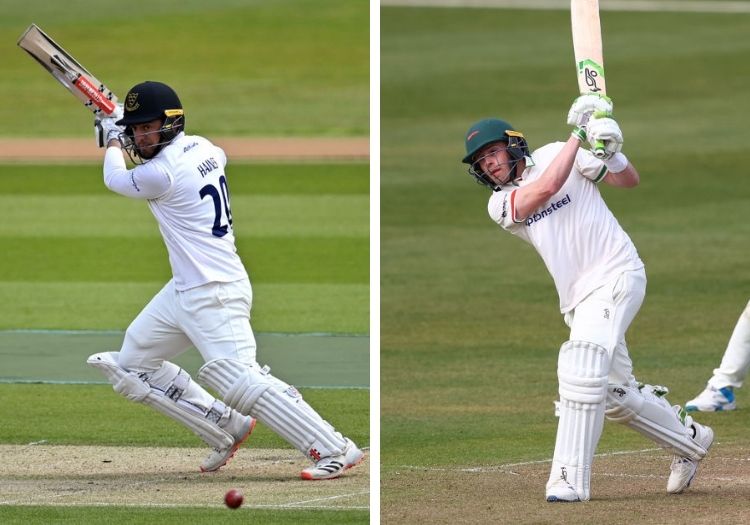 Sir Alastair Cook demonstrated his hunger for the game remains undiminished in his 37th year as he completed his first hundred of 2021 to put Essex in the ascendancy on day on of their County Championship match with Worcestershire at New Road.

A cold day, a slow pitch and no spectators could not be a starker contrast to when Cook signed off from his international career at a packed Kia Oval with a 33rd Test hundred for England against India three years ago.

But his drive and determination is still at a remarkably high level for someone who has achieved so much in nearly two decades for club and country and he went onto make 115 as Essex closed on 266-2 from 96 overs.

Ben Raine and Mark Wood provided Durham with the perfect start to their County Championship clash against Warwickshire at Emirates Riverside, bowling out the visitors for 87.

Raine was outstanding, claiming figures of five for nine, while Wood provided support with his pace with three wickets for 28. Warwickshire were rocked by the home side and were at one stage 30 for eight.

The tail wagged courtesy of Craig Miles and Liam Norwell, but the visitors produced their lowest total since 2015. Durham poured on the agony for the Midlands outfit surpassing their first-innings score without loss, ending day one with a lead of one.

Ben Slater celebrated back to back centuries before Nottinghamshire and Derbyshire collapsed spectacularly as 18 wickets fell on the opening day of the County Championship match at Derby.

But the innings imploded with eight wickets falling for 62 runs as Fynn Hudson-Prentice claimed career-best figures of four for 36 and Ben Aitchison took three for 27 to bowl Notts out for 256.

Stuart Broad responded by taking two for 22 before Luke Fletcher, three for 23 and Dane Paterson, two for 28, left Derbyshire reeling on 86 for eight at the close.

Nick Gubbins and Robbie White led a solid Middlesex batting display on the opening day of the County Championship match with Somerset at the Cooper Associates County Ground.

After losing the toss, the visitors progressed to 308 for six by the close, Gubbins contributing 75, White 70 not out and Max Holden 49.

Craig Overton was the pick of the Somerset attack, bowling with little luck for figures of two for 54 from 23 overs.

Jordan Clark claimed a career-best six for 21 as Surrey brushed aside Group Two leaders Hampshire for 92 at the Kia Oval and then scored 131 for one in reply with both Rory Burns and Hashim Amla batting masterfully on a green-tinged pitch.

Burns was on 61 not out and Amla unbeaten on 59 when bad light ended play at 5.09pm, the Test-class pair adding 100 in 30 overs to put Surrey in control of a County Championship match that began with Hampshire 36 points ahead of their opponents after only three rounds of games.

With 17 fours between them, Burns and Amla even made batting look comfortable against a below-par Hampshire seam attack despite the early loss of Mark Stoneman for seven, thin-edging Kyle Abbott behind.

Sam Evans’ third first-class century helped Leicestershire dominate the opening day against Gloucestershire at Bristol as they made 264 for four having been sent in.

Evans, 23, born in Leicester and a Loughborough University graduate, followed up his 138 at The Oval in round two with 102 here.

He and Lewis Hill, with 77 not out, steered Leicestershire from 129 for three into a strong position as Gloucestershire were left to rue their decision at the toss.

A successful first day, with Essex 266-2 at the close. Cook made 115 whilst Westley and Lawrence are unbeaten on 75 and 33 👌#WORvESS pic.twitter.com/nnvGll1Mkl

Ben Sanderson bowled in-form Adam Lyth with the first ball of the match and Wayne Parnell claimed five wickets as Northamptonshire dominated the opening day against Yorkshire at Emerald Headingley.

Lyth was the leading English run-scorer in the County Championship heading into the fourth round, with his 488 haul sparking some discussion over a Test recall following six years away.

But the left-hander was bowled off his pad as he shouldered arms at seamer Sanderson, whose two wickets backed up superb South African Parnell in Yorkshire’s 206 all out.

Left-arm pacer Parnell finished with five for 64 in his second game for Northants and Dom Bess top-scored with 56 as 19 overs were lost to bad light and rain. Northants closed on a confident 36 without loss from 11 overs.

Sussex opener Tom Haines made his fourth half-century of the season and shared a stand of 133 with Stiaan van Zyl before Lancashire hit back on the first day of their County Championship match at Hove.

Haines, 22, took his aggregate for the season to 455 from seven innings with 58 and van Zyl hit 79 as Sussex reached 318 for seven at stumps.

Lancashire’s bowlers fought back well after Haines and van Zyl took the score to 139 for one in the 41st over following the early loss of Aaron Thomason, who was caught on the crease for a duck to give the persevering Tom Bailey the first of three wickets.

But Lancashire were left to regret dropped catches. Four were put down, two by Steven Croft in the slips, with Haines and van Zyl among the beneficiaries.

Marnus Labuschagne suffered a freak injury scare falling over some steps on what was otherwise a good day for Glamorgan in their County Championship clash with Kent.

Australian superstar Labuschagne was back in the Glamorgan side after only arriving in Cardiff on Monday, but he suffered a hand problem when he fell entering the field before play started.

The third best Test batsman in the world missed part of the afternoon session while his hand was assessed. He did return to the field as Kent were bowled out for just 138.

David Lloyd claimed four for 11 and Timm van der Gugten four for 41. Glamorgan ended day one 109 for two in response, trailing by just 29 runs. Labuschagne was dismissed for just 11.