I played in the only cricket league on earth

In April, with Covid-19 putting a halt to cricket across the world, Taiwan found itself in the peculiar position of hosting the world's only active competition. ADAM HOPKINS tells his story of playing in the Taipei T10 League 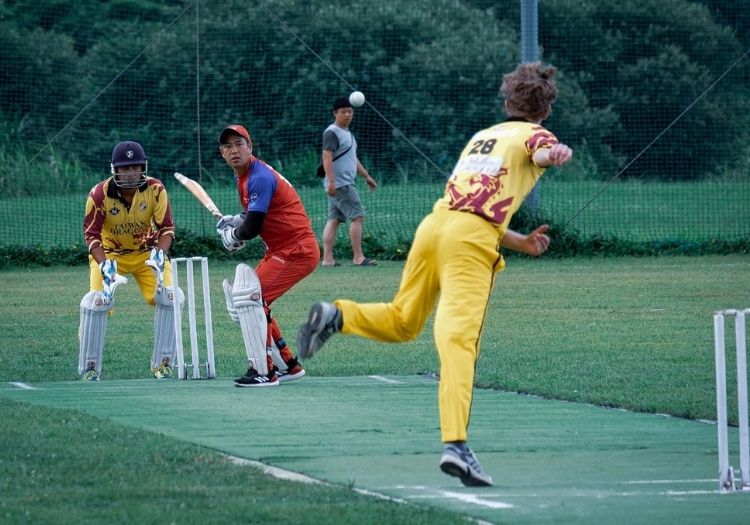 An elderly Taiwanese couple stand outside the Yingfeng Cricket Ground in Taipei’s Songshan district, not entirely sure what they’re watching.

Cricket isn’t new to Taiwan; the game has been played here recreationally by the country’s expat community since the early 1980s, with teams from Hong Kong and Yokohama having traveled to play in Taipei as far back as 1983. But, for locals in a country where baseball and basketball are the most popular sports by far, fours, sixes, off-breaks, and leg-glances are entirely foreign concepts.

“It’s English-style baseball” (英式棒球), I tell them in an attempt at giving a very loose explanation of what’s happening. “Ah, with the flat bat!” the old man exclaims. “Interesting!” he adds, before he and his wife head off to continue their Sunday afternoon walk. Obviously not interesting enough that they want to stay and watch…

While an expat cricket league in Taipei isn’t of the greatest interest to Taiwanese locals, or perhaps anyone for that matter, the players swinging their flat bats alongside the Keelung River that day were being watched by far more people than met the eye. Organised by the Taiwan Cricket Association, the Taipei T10 League, held between April 25 and May 17, was livestreamed on Indian mobile app Sports Tiger, as well as briefly on YouTube, each game attracting thousands of viewers at a time.

Pre- and post-match presentations, live English commentary, action replays, and multiple camera angles... at first glance, given the standard of play, the level of production on show seemed a bit over the top.

The quality of cricket was similar to some of the 2nd and 3rd XI club fare I’d played back home in my native West Yorkshire. Each team had two or three decent players, while some involved may well have been playing with a hard ball for the first time.

There were batsmen who had played at a decent level in Pakistan, India, and Sri Lanka respectively, a former South Africa Under-16 off-spinner, and myself who’d played at age-group level for Yorkshire and the North of England; though those days were long, long behind me.

So, why was so much attention being given to cricket in Taiwan? 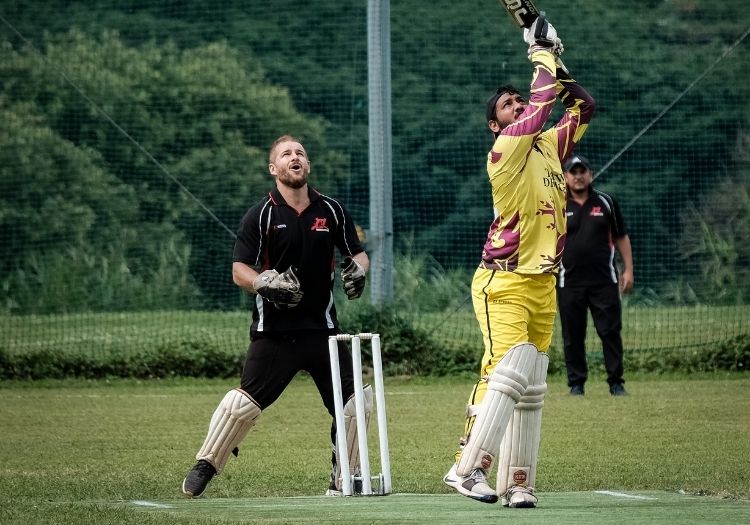 "When the tournament started, there hadn’t been a locally transmitted case of coronavirus in Taiwan for two weeks, and due to the island's incredible response to the outbreak, there wouldn't be another one for more than 200 days after it concluded."

Speaking to Taiwan’s Central News Agency, the league’s official presenter, Priya Lalwani Purswaney, said the reason for organising the tournament was to bring back live sport for people to watch.

“The entire world is starved of sports and people in lockdowns in countries around the world are bored because they can't even go out and play sports,” she explained.

With Covid-19 still very much a threat at the time, players had their temperatures taken and hands sanitized before entering the ground, they had to declare their recent travel histories, and there was a limit on the number of non-playing and production staff allowed into the playing area.

In the weeks that followed, the Vanuatu Blast got in on the action, but for a while, somehow, Taiwan found itself as the only cricket-playing nation on the planet. Here’s what it was like to be part of the historic, if not unusual, tournament.

The tournament would eventually be won by PCCT United, who defeated the FCC Formosans in the final. I played for Taiwan Dragons who, after a first-day defeat that at one point saw us 35 for 8, bounced back to reach the semi-finals. The games were played on a concrete pitch covered by a mat, with all the overs bowled from one end.

Going into the first match I was rusty, having not picked up a bat or ball for the best part of two years, apart from the makeshift net session we had the week before in the baseball cages at National Taiwan University. My last competitive cricket had come in China, playing for DPR Hot Dogs CC in the Shanghai League and for the Shanghai Cricket Club rep XI, the Shanghai Dragons.

In 2018, we defeated Beijing to win the China Cup (a real trophy that definitely exists) and in 2017 we faced an MCC touring side managed by Mike Gatting that included Yasir Arafat, Steve Snell, and Simon Guy, the latter of whom had coached me briefly during my youth days at Headingley and was somewhat confused to see me lining up for a team in China. Does this say more about my cricketing decline or his coaching ability? Undoubtedly the former… 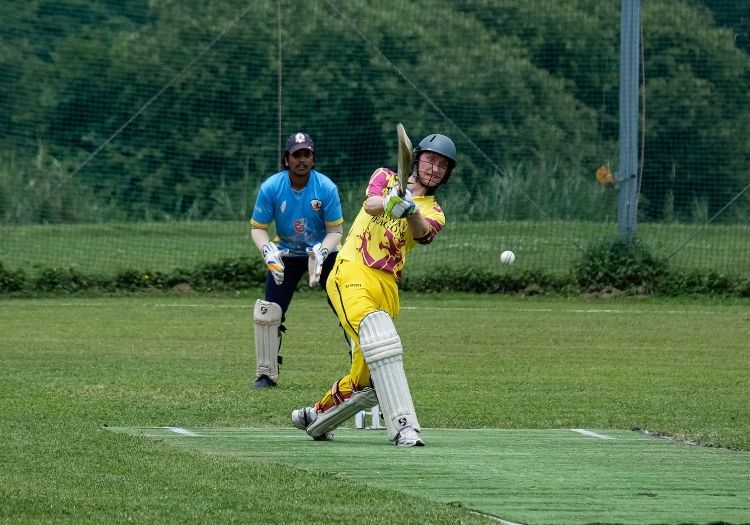 Hopkins at the crease against Hsinchu Titans

When our first game rolled around, I surprised myself with the ball, picking up 1 for 5 from my two overs of left-arm spin, and second-top-scored with 8 coming in at an already hapless position down at No.7. The following week, I was promoted to No.3 and hit what would be my highest score of the campaign, an unbeaten 23, as we registered our first victory.

A self-proclaimed bowler who bats a bit, I finished the tournament with just three wickets in five games (I had more drops off my bowling than I took wickets, but who’s counting?) but was pretty happy with my economy rate of less than seven an over, given that every batsman seemed hell bent on trying to hit me out of the ground every ball. Sure, after that 23 not out, I only scored nine more runs in three innings, but there’s a clip of me hitting a six over extra-cover on Instagram, and isn’t that what it’s all about?

But, sort of, that’s actually what it was all about. It was something for people to watch. Something positive to show friends and family back home. My teammates from India especially, where fans were drafting players in a Dream 11 fantasy league, particularly felt the pressure to perform.

It was a weird feeling. I stopped really caring about how I did on the cricket field several years ago and play mainly for enjoyment (at least that’s what I tell myself), but now there were people watching online. People I didn’t know, people I couldn’t see. There was that extra invisible pressure.

You wanted to do well, or at least to not look bad. Who knows who is watching in India? A couple of decent games and maybe I’m in the next IPL auction? Okay, disclaimer, I never thought that, but how many Taipei T10 League runs has Virat Kohli scored?

Over the years, I’ve watched many players I’ve played with and against score runs and take wickets on television. But now it was me people would be watching and, frankly, it was a little scary and a huge relief each time I got off the field having not done anything to embarrass myself.

“We watched you bowl, well done!” a WhatsApp message from my mum back in Leeds read after the first game. “Very, very questionable celebration for the wicket,” said an Instagram comment from an old university housemate watching in New Zealand. People I know around the world were watching and it was great. However, people I didn’t know were as well and that’s when it started getting weird. 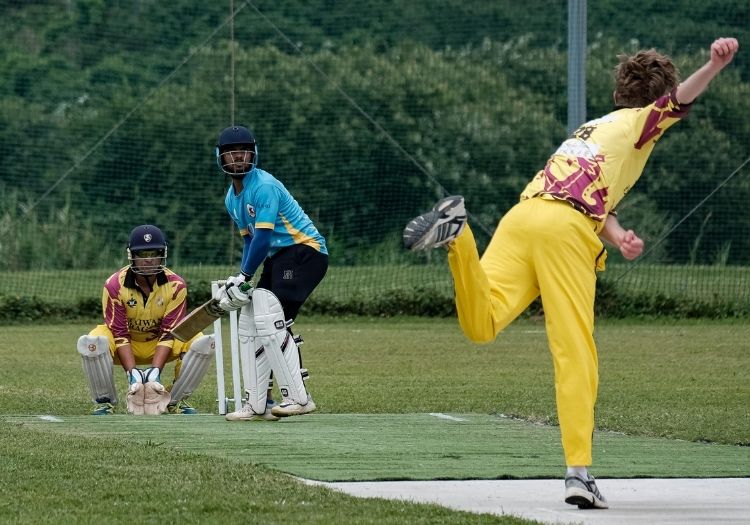 Hopkins in action with the ball

“Good morning bro,” said the first direct message on Twitter. “I am a fantasy player, sir,” read a subsequent notification. Fans playing the Dream 11 fantasy team game in India had started finding Taiwan cricketers on social media and began reaching out to us to get hold of team information for their lineups.

Googling “Taipei T10 League” would bring up pages of results of blog posts and YouTube videos of people giving advice and analysis on how to select teams, based on no real knowledge of the players.

I missed one game through injury and had a guy tweet me to say he lost 100,000 rupees (approx £1,038) as he’d picked me in his team under the impression I was fit. Ahead of the next weekend’s games, I saw a graphic online warning people about selecting me in their XI.

I imagine this is just a drop in the ocean compared to the amount of online admiration and harassment players in the IPL must receive on a daily basis, but for me this was a new feeling, especially since I was still wrapping my head around the idea of people tuning in to watch me play cricket in the first place.

It was about doing something good for those going through a difficult time. Taiwan’s coronavirus response allowed the Taiwan Cricket Association to put on a show for those who missed sport, those who missed cricket. While it didn’t solve anything in the long run, there was a time when those tuning in could forget about lockdowns, social distancing, and the uncertainty that comes with living through a virus pandemic.

They could switch off their minds for a little while and escape, which is what watching sport is all about. Looking back, I am very proud to have been a part of it.