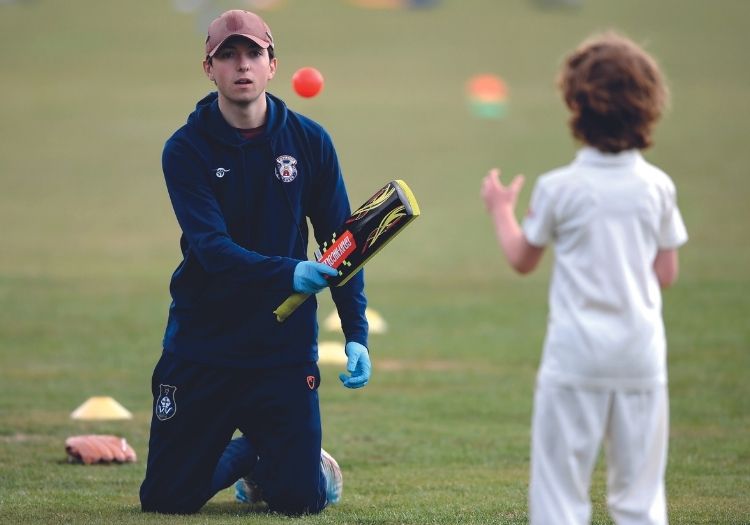 Last August, Jonathan Speller was voted The Cricketer’s Lockdown Club Hero after masterminding a programme at Wimbledon CC to allow over 750 youngsters to continue playing cricket during the coronavirus pandemic.

As Wimbledon’s director of cricket, he is responsible for the club’s cricket operations, overseeing an explosion in junior engagement and the development of a girl’s section during his three years in the role.

And, despite the pandemic, the last year has been no different. As soon as lockdown restrictions were eased, Speller created over 4,000 sessions held daily for local children and a summer camp scheme which sold out inside 48 hours to provide a safe and supervised environment for kids to stay active.

A coach with over 20 years’ experience, Speller discusses his coaching philosophy and shares his tips for maintaining a successful junior section.

My coaching philosophy has been inspired by teaching and psychology. When you’re young, you’re unconsciously incompetent – you don’t know what you don’t know. If you bombard a six-year old with technique, they’ll have no idea why they should be doing it. At Wimbledon it’s about physical literacy, getting them engaging with their friends and doing the fundamentals.

This is where the ECB’s All Stars programme is brilliant because it’s pure physical literacy. Can you balance, can you communicate, can you run fast, can you catch, can you throw? All Stars send you kit – a bat and ball for each child – which is a great starting point, while another advantage of physical literacy is you can use parent volunteers. They don’t need any specific skills and if you can engage a couple of them in a session then your coach to player ratio explodes.

When they reach under 9s, they’re consciously incompetent – they know what they can’t do – and understand better how their bodies work. That’s when you can start doing the fundamental teaching with a Level 2 coach.

You’ll see personalities come out at this point – those who are risk averse and won’t try and hit the ball hard, and the risk takers who’ll try and hit anything – and we encourage that experimentation.

With bowlers, as long as they’re bowling with a straight arm and their action is safe, great! What’s dangerous if you start coaching too soon is you pigeon-hole people. If someone says, “you’re quite a good fast bowler”, all of sudden that’s what you do. I don’t believe in that. Bowl fast, spin or swing, I want them to experiment.

12 and over: Teach the game

Here we move to game-based theory and practice, teaching them nuances and learning the actual game. We’re looking for open dialogue with the kids because in teaching, if the teacher is doing 80 per cent of the work and the kids are doing 20 per cent, they’re not really learning. Our coaches throw ideas out there and get the kids asking why or challenge them to explain why.

Setting up a junior section: Getting started

My big advice is, if you’re thinking about setting up a junior section, just start! There are lots of free resources available and volunteers will always step forward if you’ve got a common goal. Also, engage with your county board. We’re a big cricket family and if you ask, people will help.

You’ve got to think about your legal and safeguarding policies. This includes DBS checks for coaches and volunteers, sticking to ECB ratios of coaches to players (especially when using hard balls) and having permission for photos. Appoint a club welfare officer and use the resources available on the ECB website to make sure you’re ticking all the boxes.

And think about the admin side, how you’re going to communicate with parents, manage membership etc. We use an app called Spond (although there are others) which is a real time-saver.

Take advantage of what’s out there. All Stars is excellent here because it’s a public forum where people put their location in and are matched to clubs in their area. Social media is good for catching parents too but our big one is holiday camps. Someone might not want to commit to a full season but a few days at cricket camp gives them a feel for it.

We’ve pushed a lot harder on our summer camps recently. The emphasis is on them being young kids and having fun, and the early drop-off and late pick-ups help local parents during a long summer. Open them to members and non-members to attract as many kids as possible.

Have a uniform. It sounds silly but a uniform brings people together and creates a community sense. In our club it helps to level the playing field amongst the kids – it doesn’t matter if you’re private school or state school, high or low economic background, you have a collective love of one thing and a pride of the badge. As Wimbledon, we’re a family and that’s what it’s all about.

One of the first things I looked at was the pressure on kids to move onto hardball at a certain age, something I think can be a huge turn-off. Instead, be flexible. We created a softball programme to keep more kids at the club.

Also, all our session plans include the next step up or down – e.g. using a smaller ball or a bigger ball – to challenge/help the kids while one to one coaching and nets are always available for those looking for something extra.

Setting up a girl's section

Starting a girl’s section from scratch is like starting any junior section. You just want to engage and inspire, and now girl’s cricket is taking off in schools, you have loads more girls who are interested!

At Wimbledon, up to under nines we don’t split them because there’s no difference up to this stage on their learning journey. They’re split after that, but that’s only because some girls prefer to play girls only. However our girl’s sessions and boy’s sessions are run at the same time and any girls who want to join in with the boys can! Our coaches are always adaptable and allow players to swap in between sessions.

We don’t have a ‘girl’s night’ because we want them to see themselves as cricketers, not ‘female cricketers’. However. having a girl’s night does have its advantages – it creates a community. At my old club, Friday night was girl’s night, and they’d have pizza after training. But, as long as you’re engaging, enthusing and inspiring, you do what works for your club.

Remember, your job isn’t to create the next England star

People might ask why I don’t push the kids harder but that’s not my job. My job is to inspire you to play into your 40s, 50s, 60s with your kids and grandkids. Instead, make a good connection with your county set-up and their elite programme. If someone shows promise, you can put them on that pathway where they can be challenged further, but don’t run the risk of putting kids under pressure.

I also don’t subscribe to kids playing up a year. Future leaders learn in the safety and confines of their peer age. Usually, the young guy or girl in the side doesn’t stride into an older age-group  as a leader, again pigeon holing them into a role in the team. If they need challenging, encourage the better players to mentor their teammates or younger age-groups and develop those softer skills and learn from teaching others.

Five key steps for setting up a junior section
1. Use the available resources, such as your local county board and the ECB’s All Stars programme.
2. Get your ECB Clubmark – it’s official accreditation of your legal and safeguarding policies and shows you’re ticking all of the boxes.
3. Think about your community – will holiday camps be a great starting point? Do you want a uniform?
4. Treasure your parent volunteers  - they keep the kids engaged and are a free resource who are giving up their time around the club.
5. Emphasise physical literacy and cricket skills instead of technique for younger age groups.