The Strikers lost to the Renegades by two runs in their tournament opener but bounced back two days later, with Peter Siddle (1 for 11), Rashid Khan (2 for 17), Daniel Worrall (2 for 18) and Wes Agar (3 for 17) dominating with the ball 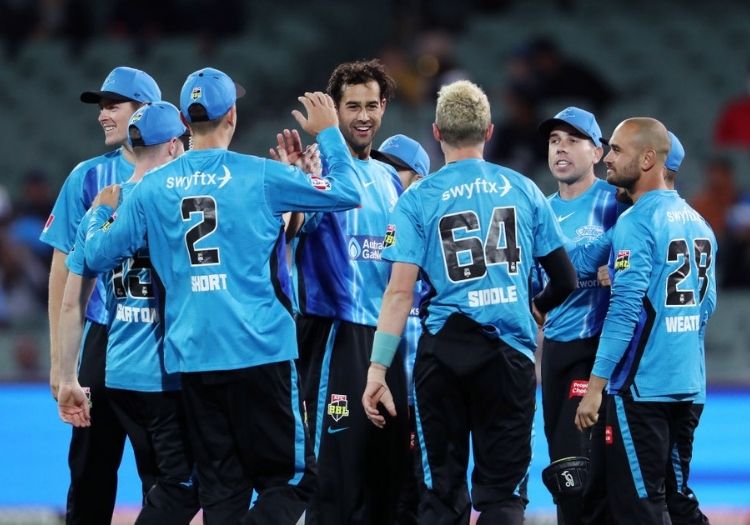 Adelaide Strikers picked up their first win of the 2021-22 Big Bash after defeating Melbourne Renegades by 49 runs.

48 hours earlier, the Strikers had suffered a two-run defeat against the Renegades at the Marvel Stadium, with Zahir Khan, Will Sutherland and Kane Williamson excelling with the ball for the Melbourne side. However, on home soil, it was the turn of the Strikers attack to produce a bowling masterclass as the Renegades were all out for 100 in pursuit of 149.

Wes Agar was the pick of Adelaide’s bowlers, taking 3 for 17 and combining with Harry Nielsen to runout Mackenzie Harvey, while Rashid Khan (2 for 17), Daniel Worrall (2 for 18) and Peter Siddle (1 for 11) all conceded less than a-run-a-ball.

The Renegades actually had a promising start to their chase, a 39-run opening stand between Sam Harper and Harvey helping them to 69 for 2 at the halfway mark - 81 runs short of victory.

However, when Harper fell four balls after drinks it sparked a collapse which saw the Renegades lose seven wickets for just 28 runs. Harper was the only Melbourne batter to pass 20, departing for a 31-ball 33, while Jonathan Merlo, Jake Fraser-McGurk, Sutherland, James Pattinson, Richardson and Zahir Khan all departed for single-figure knocks in a poor display of tail-end resistance.

Earlier in the day, the Strikers enjoyed their own innings of two halves, safely reaching 104 for 3 midway through the 13th over before losing seven wickets for just 45 runs.

Captain Richardson was the architect of the collapse, removing Daniel Drew and Jonathan Wells in quick succession to reduce the Strikers to 111 for 5 before sharing the final five wickets with Reece Topley as the Strikers were all out for 149 in 19 overs.

Richardson finished with figures of 4 for 32 while Topley collected 3 for 32 – a significant improvement on his 1 for 43 on debut. Mohammad Nabi also chipped in with an economical 0 for 16 and three catches while Zahir Khan picked up two top-order wickets.

With the bat, Wells and Matthew Short top-scored for the Strikers, scoring 37 (30 balls) and 32 (17), respectively, while George Garton chipped in with a handy 11-ball 19 from the lower order.