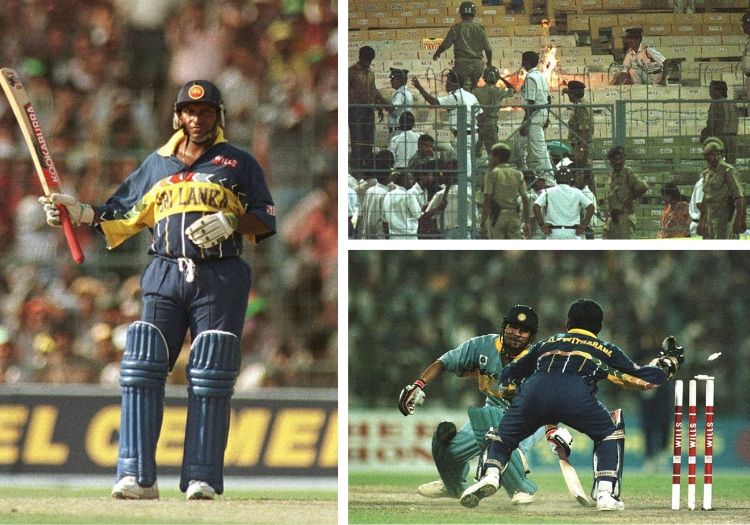 Vinod Kambli is running from the field. Tears are swelling in his eyes. The 1996 World Cup semi-final was not supposed to end like this. Not out on 10, he is marched from the middle, unable to do anything to prevent India tumbling to defeat to Sri Lanka at their home tournament.

When India won the World Cup in surprising circumstances in 1983, it was meant to usher in a new era for the sport in the country. But 13 years later, some may have been wondering whether the hype that had been created by Kapil Dev's side was worth it. India had taken one step forward, but two back.

The atmosphere around the first semi-final in Kolkata had been amplified by the manner of the victory over rivals Pakistan in the quarter-finals four days earlier. Chasing 288 to win, it took a flurry of late wickets from Anil Kumble to secure the 39-run success. Nerves shredded by expectations, India headed into the last four believing they were destined to win the competition on home turf.

Despite pre-match discussions to the contrary, India opted to bowl after winning the toss, something Kambli later insisted was different to the brief before the game. Sri Lanka had endured an odd route to the knock-out stage having benefitted from two walkovers over Australia and West Indies, before beating England.

Nonetheless, one of the defining features of their displays was their power at the top of the innings and having been stuck in they exhibited that skill to full effect. Aravinda de Silva blasted a memorable 66 from 47 balls, an innings underpinned by Roshan Mahananma's watchful 58 and contributions right down the order. Javagal Srinath had dismissed the top three but it was to no avail as India were set a daunting 252 to reach the final.

Much of what had taken place would be overshadowed by what was to follow. Sachin Tendulkar batted delightfully for 65 to guide the hosts to 98 for 1. But it was the dismissal of the little master, stumped by Romesh Kaluwitharana off the bowling of Jayasuriya, which changed the complexion of the contest.

India lost their grip on the game and their fans, their grip on reality. They watched seven wickets fall for just 22 as Jayasuriya and Muttiah Muralitharan spun a web on a sticky wicket, while the nerves frayed at the other end. 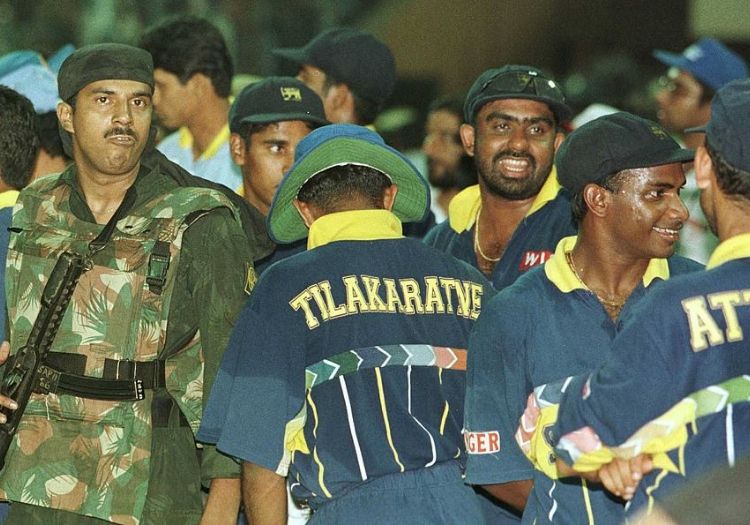 Sri Lanka, unable to celebrate, were surrounded by security

The realisation that India's World Cup dream was not going to be achieved dawned on the home crowd. And in a tense situation, they reacted they only way that seemed natural at the time. Bottles started to flood the outfield, followed by pieces of fruit. Officials claim glass followed, which by now had forced many Sri Lankan fielders away from the rope.

Security staff tried to intervene but quickly it was evident that play had to be halted. The umpires took both sides from the field in an effort to ride out the wave of discontent. Fires had begun in some parts of Eden Gardens, such was the frustration which was boiling over. And yet, India still had two wickets and more than 15 overs to salvage something, even it was only pride.

But they would not even be allowed to do that. Though the onslaught did temporarily relent, it resumed when it seemed clear umpires Steve Dunne and Cyril Mitchley wanted to restart the game. Match referee Clive Lloyd immediately called the game off, giving Sri Lanka a default victory and a place in their first World Cup final. 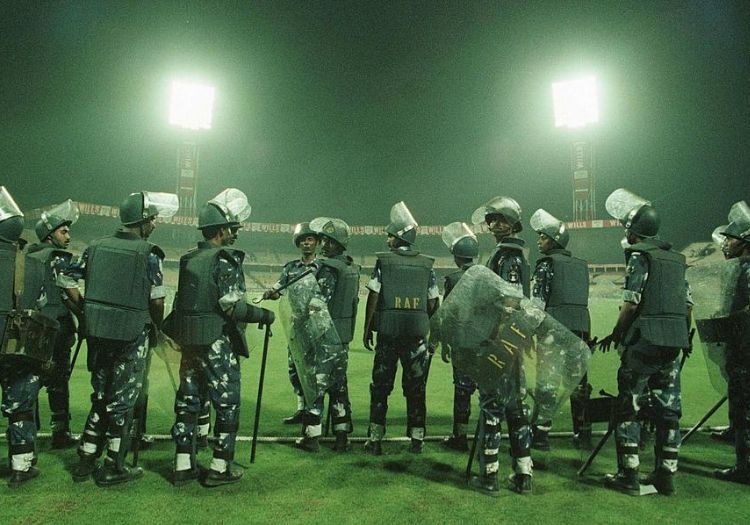 Security lined the boundary as the attack continued

The images as both sets of players made their way from the field for the final time captured one of cricket's darkest days. Sri Lanka's celebrations were muted, non-existent even. They had been deprived of the chance to beat India fair and square and celebrate their progress. India meanwhile, and most pertinently not out batsman Kambli and Kumble were denied the opportunity to make heroes for themselves.

Lessons were at the very least, learned. Apologies were sent to the Sri Lanka team, and a letter directly on behalf of residents - including schools, colleges, clubs and offices - was sent to captain Arjuna Ranatunga. That moment of euphoria was replaced by victory in the final, but it was a gesture which went a long way to rebuilding trust and relations.