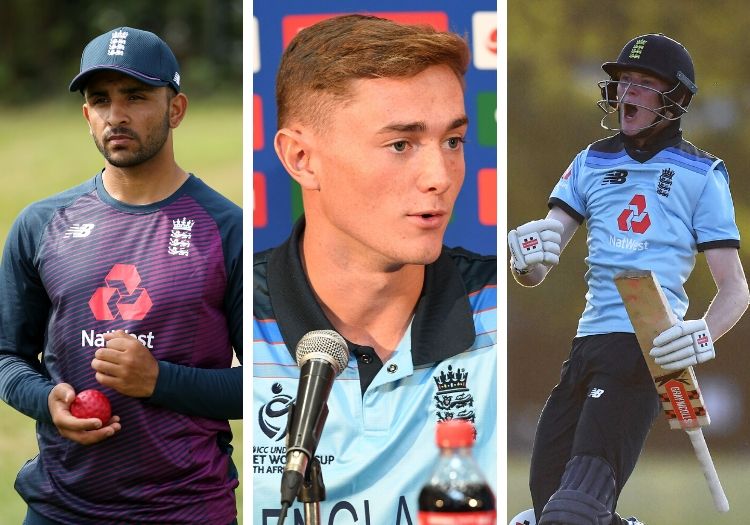 England's most prolific wicket-taker in Youth ODI cricket since the previous World Cup tournament will be the one trusted to lead the side into battle when the 12th Under-19 Cricket World Cup gets under way in South Africa later this week.

George Balderson, who is yet to debut for Lancashire's first XI but recently earned a contract extension with the county after a string of impressive second-team outings, is commonly used as a top-three batsman by his county but is more likely to be seen marshalling troops in the field and providing hearty right-arm pace.

In December's Youth ODI tri-series in the West Indies, Balderson finished as the team's leading wicket-taker (15 victims at only 10.46 each) and was second only to Sri Lankan leg-spinner Kavindu Nadeeshan despite the series being played on low, slow tracks unsuited to his abilities.

George Hill has already played a cameo role in England cricket, having featured as a sub fielder for the senior Test side during last summer's famous Ashes contest at Headingley.

However, the allrounder is likely to have a bigger claim to fame as a stalwart of the playing XI at this year's Under-19 World Cup, both as a charismatic vice-captain in tandem with George Balderson and as a bustling paceman and gritty batsman.

Hill emerged into the setup at the start of 2019 and, though his numbers in the Youth ODI format are not yet glittering, he quickly became an indispensible member of Jon Lewis' setup during a tour of Bangladesh, adding 91 in a Youth Test before spearheading the seam attack in white-ball action.

The latest pace product to emerge from the Somerset academy pipeline, Kasey Aldridge accelerated through the programme after joining the setup in 2018 to sign a two-year pro contract in August.

Aldridge, whose height offers pace and bounce that should be suited to South African conditions across the tournament, has already spoken of his ambition to follow the likes of Simon Jones and Ian Ward from Millfield School into Test cricket.

Now a fully-fledged member of the Somerset playing staff after claiming a wicket in each of his second-team outings to date, Aldridge will certainly be a player to watch in the coming years as he hones his craft alongside the likes of Vernon Philander and the Overton twins. 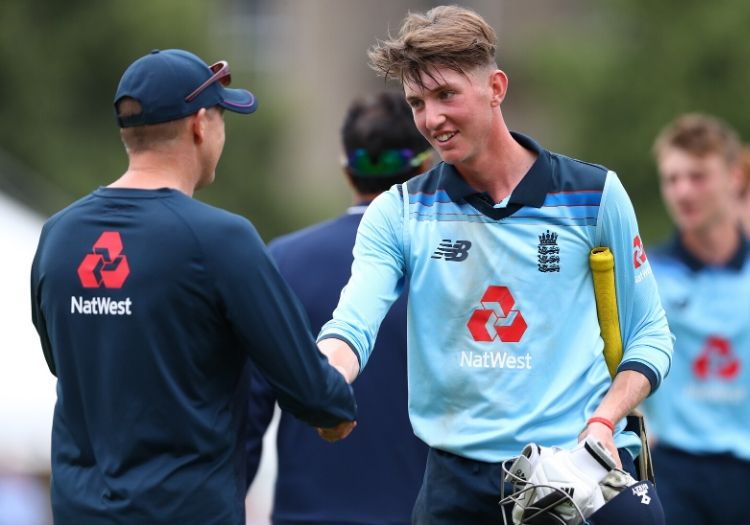 Perhaps the most familiar name among England's squad to county followers, Ben Charlesworth broke into Gloucestershire's red-ball setup late in the summer of 2018 before making five appearances during their Division Two promotion campaign last year.

The Oxfordshire-born allrounder closed a difficult season by matching his career-best 77 not out in his final knock. However, on international duty he is most likely to be found opening the innings, which he has yet to do at county level.

The previous summer had seen him become the county's youngest player to register a half-century in more than 70 years, and the England Under-19 call-up that followed saw him score 115 and 99 in consecutive innings against a strong Bangladesh side to open 2019.

An elegant left-hander and athletic fielder, Tom Clark was called upon to make his first-class debut in Sussex's final outing of 2019 before agreeing a pro contract with the club at the start of November.

The 17-year-old is the latest in a long line of players to join the county from Horsham CC, where Jofra Archer, Will Beer, George Garton and Tom Haines have all been among his teammates since making his first Sussex Premier League appearance in 2015.

In addition to making 22 second-team appearances for his county, Clark has been a regular fixture of England's top order since joining the setup this summer, registering a high score of 66 as the team claimed a consolation victory at Beckenham against India in August.

Wicketkeeper Cox debuted for Kent across all three formats in 2019, making 11 appearances for the county following injury to club captain Sam Billings. He had signed his maiden professional deal with the county the previous winter, after seven years in the club's system.

A product of Felsted School, which boasts Test players Nick Knight and Derek Pringle as alumni and Jason Gallian and Carla Rudd on staff, Cox has typically figured lower down the order on first-team county duty thus far. However, he earned a promotion to first drop for September's County Championship trip to Trent Bridge after carrying his bat for an elegant and mature 122 not out for England's Under-19 side one month prior.

Cox followed up the performance during England's trip to the West Indies in December with an unbeaten 109 against Sri Lanka as the side tallied 292 for 4 – the highest total in a low-scoring series – before anchoring England's reply with a top score of 77 against the same opposition in the final.

He may be the youngest member of England's squad travelling to this year's tournament, but seamer Blake Cullen is no stranger to such situations having featured alongside Sam Robson and James Harris aged 15 on his second-team debut for Middlesex.

Since debuting in the Under-19 setup last July, Cullen has taken the new ball on nine occasions in Youth ODI cricket and found significant success on his first tour, claiming eight wickets and conceding under four runs per over during the side's outings in the Caribbean.

While Cullen is yet to sign a professional contract with his county, such honours are surely not far away as he registered a maiden five-wicket haul in the Second XI Trophy last summer – his figures of 5-68 against Glamorgan at Radlett were the county's best of the competition. 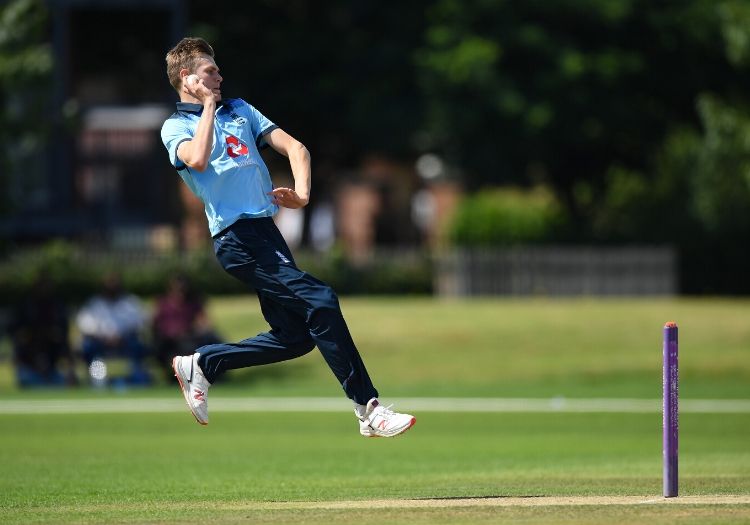 Scott Currie is a talented allrounder in more than just cricket, having opted for the sport after playing for Portsmouth FC at youth level before Dorset and Hampshire cricket won out.

The seamer burst into Minor Counties action within days of turning 15, but he was one of the last players to establish himself in the Under-19 setup for this tournament, with December's Caribbean tri-series his first time in action for the Young Lions.

However, with Surrey-bound quick Nick Kimber unavailable with a stress fracture to the back, tidy displays saw Currie successfully stake his claim and he will hope to repay Jon Lewis' faith as the tournament proper begins.

One of three players introduced to the squad in time for December's trip to the West Indies, Yorkshire wicketkeeper Harry Duke made a late push into the side after impressing during the ECB's Super Fours tournament for Under-17 players in August.

Duke earned a place on the tour ahead of county teammate Finlay Bean, who had previously covered England's glovework during the summer tri-series while Jordan Cox was on Kent duty.

The 18-year-old is perhaps England's most untested squad member heading into this year's tournament, having not yet batted through his four matches in the side to date.

The 17-year-old's emergence was a rare highlight from a miserable 2019 for Nottinghamshire, ending the season by putting pen to paper on a three-year deal with the county a week after becoming their youngest County Championship representative since Bilal Shafayat in 2001.

Seam-bowling allrounder Evison is therefore one of a handful of England's World Cup squad to still be at school – coached by Dean Headley at Stamford, which also produced Zak Chappell and Shan Masood – and a blistering 18-ball 50 not out closed an impressive run during England's recent tri-series in the West Indies.

As recently as last season Evison was prolific at Under-17 level, finishing the ECB's regional Super Fours competition as the leading scorer with four half-centuries in five matches. That the Peterborough-born player has found success in the game should come as no surprise, as dad Gareth and elder brother Sam have each turned out for Lincolnshire.

One of a trio of Somerset youngsters featuring in the England setup this time around, Lewis Goldsworthy will hope to become the first Cornishman to play full international cricket since the recently-retired Marcus Trescothick.

Goldsworthy, who graduated from the county's academy to a two-year pro deal in September, began to emerge as a wicket-taking threat with his orthodox spin during the side's December trip to the West Indies, conceding only 3.69 per over and taking braces in consecutive outings to end the group stage of the tri-series. 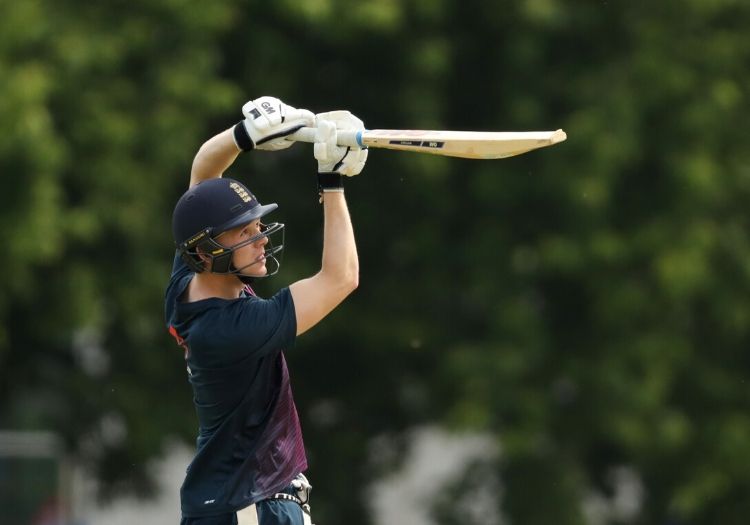 Jack Haynes broke into the Worcestershire lineup in 2019

After making his first-class debut against the touring Australians in August, Jack Haynes went on to become a regular fixture in the Worcestershire middle-order as a dismal County Championship campaign wound down.

The previous summer had seen the right-hander make a white-ball debut for the county, scoring a brisk 33 against the West Indies, and he is set to turn 19 just days after a possible semi-final should England be one of the two sides to escape Group B.

Haynes, who studied at Malvern College, has already spent three years in the county's academy system, joining the professional squad on a pre-season tour to Abu Dhabi in 2018 before signing a contract less than three months into the season.

After making his England Under-19 debut in January and signing a professional deal with Warwickshire in May, batting allrounder Dan Mousley added another feather to his cap by making his County Championship debut in Chelmsford in July.

Mousley, who has also played Minor Counties cricket for Staffordshire and hopes to follow fellow Aston Villa supporters Chris Woakes and Ian Bell into Warwickshire and England folklore, went on to average 40.79 for the county's second team in 2019, with three centuries coming in 16 appearances.

While the 18-year-old has only once passed 50 in Under-19 internationals – 74 not out from 80 balls to seal a convincing win over India in August – he had opened the preparations for the series with a quickfire 146 against Ireland's senior academy side in July and made a number of vital contributions for the side in the Caribbean.

The Afghanistan-born off-spinner was handed a County Championship debut against Glamorgan in June 2017 – becoming the first child of the 2000s to play in the competition – and claimed five second-innings wickets to secure Derbyshire's first red-ball win for almost two years.

However, opportunities at the county soon dried up and Qadri will hope to revive his career at the age of 19 after agreeing a three-year move to Kent, where he will continue his partnership with Min Patel. The former England spinner combines a role as the spin coach for the Under-19 side with a position overseeing the county's talent pathway.

Qadri made his first appearance for the Under-19 team in August 2017, and is the most capped member of this year's squad at Youth ODI level. His tally of 18 wickets in the format trails only captain George Balderson among England bowlers since the last World Cup, and a career-best haul of 5-61 against India in Chelmsford last summer was agonisingly close to helping his side defend a meagre total of 204.

The final member of the Somerset-Millfield trio alongside Lewis Goldsworthy and Kasey Aldridge, the oldest member of England's playing staff for this tournament was another player who earned a place in the final 15 just last month in the West Indies.

Devon-born batsman Young made an instant impact in his first county second-team outings of 2019, with innings of 95 and 63 from No.6 against Gloucestershire and No.2 against Devon during the Easter break before a maiden century followed against the MCC Young Cricketers in July.

While Young had spent last winter as an unused reserve player for the Under-19 side, he picked up a brisk 41 in his first game for the team (a tri-series warm-up fixture against an Antigua XI) and played a plucky supporting role to Jordan Cox with 33 from 57 in the penultimate fixture of the tour to book his flight to South Africa ahead of Middlesex's Luke Hollman.

VISIT THE UNDER-19 WORLD CUP HUB