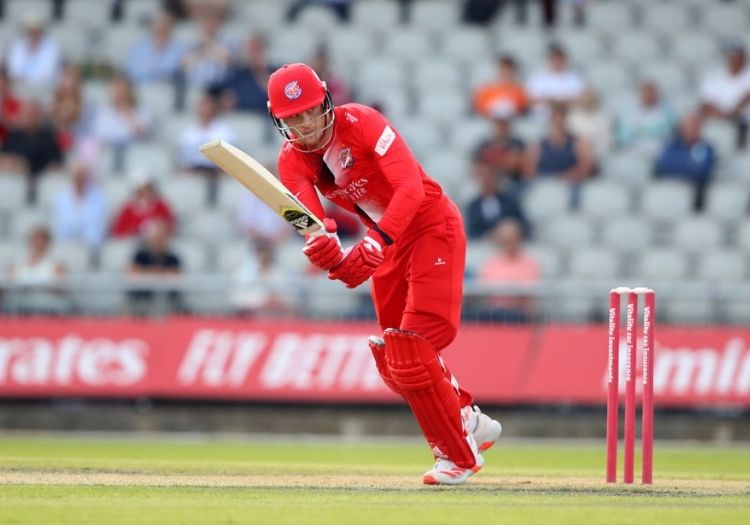 Allen made 66 off 37 balls with seven fours and three sixes as his side overhauled the Steelbacks’ moderate total of 142 for 8 with 26 balls to spare.

The result keeps Lightning’s hopes of qualifying for the quarter-finals very much alive but the Steelbacks chances are very slim after an evening in which the visitors were not on form in any of the three disciplines.

Northamptonshire Steelbacks’ innings got off to a dreadful start when they lost their openers Ben Curran and Ricardo Vasconcelos to catches in the deep in the first 11 balls of their innings. Steven Croft and Tom Hartley were the successful bowlers and they were joined by Liam Hurt in the fifth over when Josh Cobb clipped him to Danny Lamb at short fine leg and departed for 20.

Poorly placed on 42 for 3 after their Powerplay, the Steelbacks’ reconstruction of their innings was left in the hands of Rob Keogh and Mohammad Nabi and this pair added 60 in nearly nine overs before Nabi was leg before wicket for 27 when attempting a pull off Lamb.

Keogh went on to make a gutsy 56 despite appearing to suffer a leg injury but he was one of four wickets to fall in the final four overs as the Steelbacks innings ran out of steam. Lancashire’s cricket, by contrast, was outstanding with at least five fine catches being taken in the deep.

Hurt’s 3 for 22 represented his best return in T20 cricket but no member of the Lightning attack was collared. Lamb took 2 for 27 and Luke Wells conceded only 18 runs from three overs of leg-spin.

Lancashire reply got off to a very brisk start with the fifty coming up in 33 balls and both Allen and Jennings scoring freely. The pair had set a new first-wicket record for Lancashire against Northamptonshire before Allen pulled Nabi to Josh Cobb at midwicket.

However, neither this wicket nor that of Alex Davies, caught at deep midwicket by Nabi off Freddie Heldreich for seven materially affected the outcome. Having reached his own fifty off 38 balls, nine balls more than Allen had taken, Jennings was unbeaten on 54 when victory was clinched by Dane Vilas’s massive six.