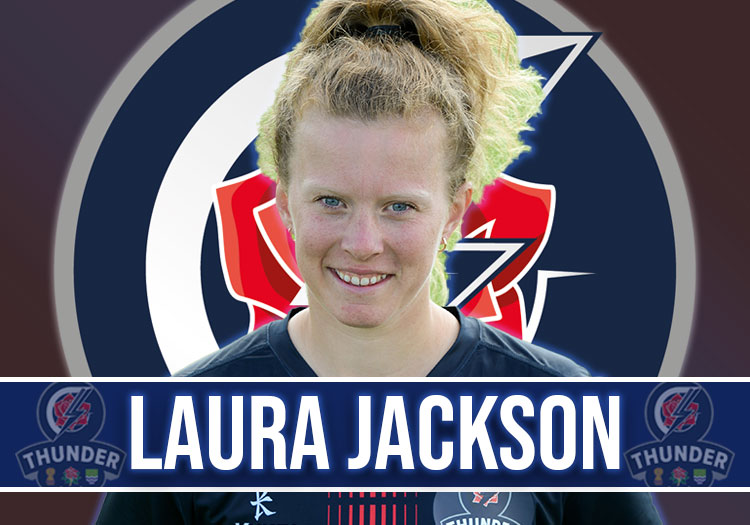 Allrounder Laura Jackson made three appearances for Thunder in the 2020 Rachael Heyhoe Flint Trophy, taking two wickets with an economy of 2.68 and scoring 23 runs.

However, in 2021, she established herself as a crucial player in Thunder's bowling attack, taking five wickets across both formats and picking up the club's breakthrough player of the year gong.

She also made three appearances for Manchester Originals in The Hundred, taking four wickets, and has been retained by the franchise ahead of the 2022 tournament.

An aggressive opening swing bowler, she credits her upturn in form altering her run-up and putting in more hours in the gym to add extra pace, and has ambitions of becoming one of Thunder's go-to allrounders in 2022.

"Now I'm in the swing with my stock ball, I need to get my variations firing so I'm more threatening when I bowl. We need someone in the squad to bowl with Crossy and hopefully I can be that person," she told The Cricketer.

"With the bat, I'm not a typical fast bowler-batter, I don't just whack it. I like to hit the gaps, rotate the strike and support the batter at the other end. I've been working on all aspects so I can hit 360 and score in all areas. I aspire to be that allrounder in the team."

Jackson has previously represented Cheshire and Cumbria alongside Lancashire at county level and spent a winter playing cricket in Melbourne for Edinburgh CC.

She was awarded a professional contract ahead of the 2022 season having previously balanced her cricketing commitments with working in her dad's packaging consultancy firm.