When Northamptonshire stumbled to 35 for 4 with eight balls remaining, it seemed as though the comeback would be completed. But Vasconcelos retained his cool 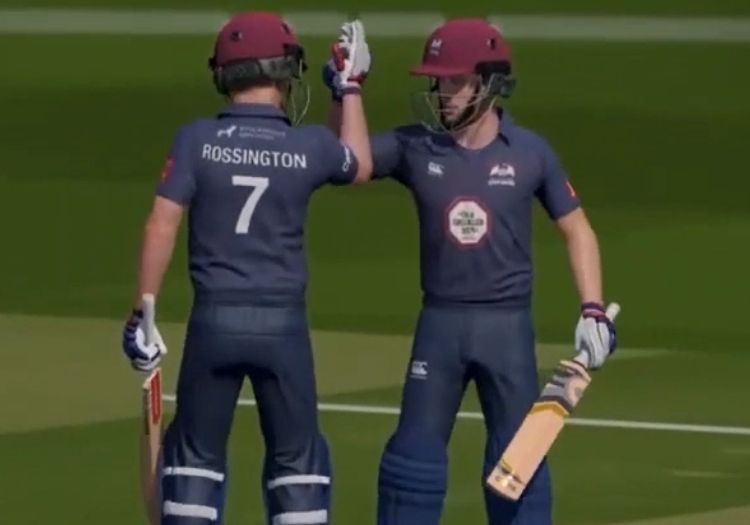 Northamptonshire made sure that Group 1 of the Quarantine Cup remains very much alive by claiming last-ball victory over Nottinghamshire.

Ricardo Vasconcelos, manning the controls for Northamptonshire, made sure that his side were not punished for letting Notts off the hook after yet another major batting collapse had looked like ripping the carpet from underneath their feet.

Coach Tom Moores, who has struggled with the bat for much of the competition, found his team 5 for 3 midway through the second over but recovered with a partnership worth 42 between his digital self and Dan Christian to reach a competitive total.

When Northamptonshire stumbled to 35 for 4 with eight balls remaining, it seemed as though the comeback would be completed. But Vasconcelos retained his cool, and he remains in contention for a semi-final spot after pulling his team level on points with Gloucestershire and Hampshire.

Nottinghamshire lost a wicket with the first ball of the match. The newly-peroxided Nathan Buck delivered a booming inswinger which Alex Hales tried to drive through cover, missed by two or three feet, and felt the ball thump into his trailing leg.

Hales wasted a review trying to avoid the ignominy of being dismissed for a diamond duck, with DRS showing impact on middle and leg.

Steven Mullaney got the Notts score ticking with a gorgeous drive for four through extra cover but played and missed at his next five deliveries before losing his off peg to a regulation line and length ball from Ben Sanderson, while Samit Patel lasted picked out the leaning left hand of Alex Wakely at mid-off to leave Nottinghamshire 5 for 3.

Given Moores’ form in the tournament - bowled out for 9 as he was by Essex and 17 by Hampshire - it felt as though an early finish was inevitable. Dan Christian had other ideas.

He clubbed Blessing Muzarabani straight down the ground for six, picked up four when Wakely pinged a wildly unnecessary throw at the non-striker’s stumps and watched in horror as the ball raced to the boundary at square leg, and completely altered the complexion of the innings.

With Moores benefiting from a feeble drop at mid-on off Faheem Ashraf, there was plenty of evidence that the tide was turning.

The spillage was immediately punished, with Moores clipping an effortless six into the Grandstand, and the wicketkeeper continued to push his side towards a score of substance as the innings ran its course.

He ended with an unbeaten 30, including three fours and an imperious maximum down the ground off Keiron Pollard in the final over, and Notts stood a chance.

Northamptonshire made a tentative start to their chace, with Vasconcelos chipping a catch to Stuart Broad at midwicket off Luke Fletcher in the first over

Pollard made his presence known with an elegant glance through the legside for four from both his first and second deliveries, before picking Broad up for a terrific six to take his team to 19 for 1 from two overs.

Richard Levi welcomed Patel to the crease with a booming straight drive over the extra cover boundary, and with the required run rate falling to just more than a run a ball, it seemed as though all Nottinghamshire’s hard work was unravelling.

Levi failed to clear Hales at mid-off, hinting at another momentum shift, while Pollard lost his off stump to Matt Carter in the penultimate over. When Wakely chipped a catch to mid-on off Carter, Notts were favourites.

Vasconcelos kept his cool behind the controls however, manoeuvring the ball around the field, protecting his final wicket and taking 11 off the final over - very strangely bowled by Ben Duckett - to steer his team to victory from the final delivery of the match.

“Things didn’t go to plan with the ball in the last few overs, we had a dropped catch and were a bit wayward, but we’ll take it,” Vasconcelos said afterwards.

It was the second time the South African had won a game from the final ball of a Quarantine Cup match this season, after beating Dan Mousley earlier in the competition.

“It’s a spectator support and we’ve got to make it as exciting for everyone watching at home,” he said.

“I could say I’m doing it on purpose but I’m really not.”