Sussex's race is run, pre-tournament favourite Mills dispatched. It will be a Hampshire vs Glamorgan final. Crane vs Walker. It's on. One game. Five overs. One trophy 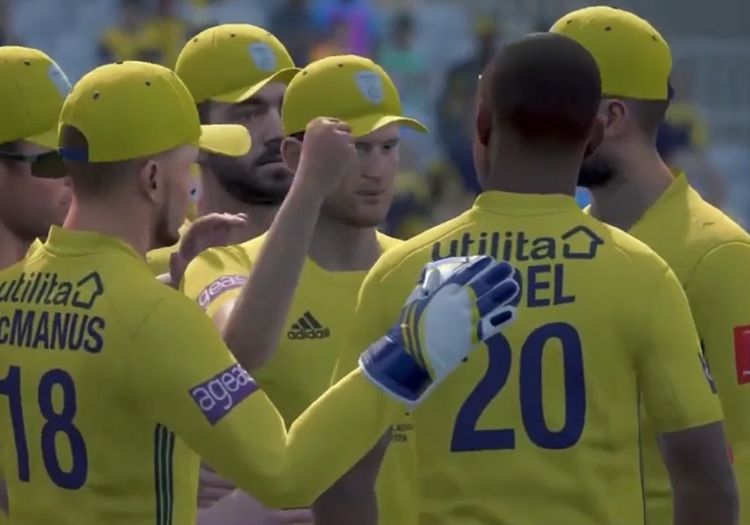 A belting virtual occasion and some of the bluest skies that any computer could possibly manufacture. First blood went the way of Sussex, winning the toss and electing to bowl. Would that come back to haunt Mills? Gloucestershire had come unstuck in the first semi-final through exactly the same means – there are few challenges more fraught with danger than a run-chase under pressure.

And Crane made his opponent pay immediately: James Vince slashed the first ball of this Five5 encounter to the boundary and proceedings were up and running. Two balls later, he followed up with a back-foot punch through cover for a second four. Glorious, glorious scenes. Who ever said that Cricket 19 isn’t realistic?

Sussex’s campaign has been built around a star-studded quintet of bowlers: Mills being joined by Rashid Khan, Chris Jordan, Danny Briggs and Jofra Archer. Khan followed Mills into the attack, with Aneurin Donald opting to reverse sweep at will – not once successful. When he stood still, he whipped the computerised Afghan leg-spinner through midwicket for a boundary. And when Vince took up the strike, he caressed him through cover for his third boundary.

The England batsman was on a one-man mission: he hooked Jordan’s first ball for four, before then hammering his international colleague 139 yards and into The Point. Ten from two became 16 from three – Jordan’s follow-up was predictably a bouncer and Vince responded in style, flaying it over the legside. For good measure, there was a third six in the over to follow.

Meanwhile, Donald fell to bring an end to an opening stand that had contributed 50; after swatting Briggs’ second delivery over the ropes, he could only pick out Archer with his response. Vince, though, continued along his merry way. Crane’s button-pressing was faultless as the languid right-hander added 16 more runs off Briggs’ next three balls. It brought Vince to his half century – the first of the Quarantine Cup; a pretty outrageous effort, all told. It had taken him just 15 deliveries.

He holed out to the last ball of the innings for 53, pulling Archer to Briggs, as Hampshire set Sussex 71 to win – an almighty chase at the best of times, let alone with a final place on the line.

The response got off to the worst possible start, with Phil Salt falling lbw to Kyle Abbott, only for Ravi Bopara to stroke his first ball for six in a show of defiance. And the former Essex man was not going down without a fight; he followed one maximum with two more, lofting Nathan Lyon over long-on twice in quick succession.

Yet, just as the chase appeared to be building up ahead of steam, Luke Wright ran himself out. No other way to describe it, really. He wasn’t even in the frame as the throw came in from the square leg boundary.

He was replaced by Ben Brown, however, and the wicketkeeper welcomed himself to the crease by slotting Liam Dawson for six more. An absolute festival of hitting. Out of nowhere, he struck three more successive sixes in the penultimate over to bring the equation down to 16 off six. Mark Church on commentary was audibly losing the plot as the drama reached its zenith.

A dot ball from Fidel Edwards meant that Sussex needed 16 off five, before two scrambled runs brought it down to 14 off four. When it was most needed, the slingy West Indian kept his cool; he trapped Bopara with a toe-crushing yorker to close out the win.

Sussex’s race is run, pre-tournament favourite Mills dispatched. It will be a Hampshire vs Glamorgan final. Crane vs Walker. It’s on. One game. Five overs. One trophy.