ELIZABETH BOTCHERBY: In Dubai, Shaheen Shah Afridi established himself as Pakistan’s fast bowling darling with a star turn versus India. Against New Zealand in Sharjah, the stage belonged to Haris Rauf 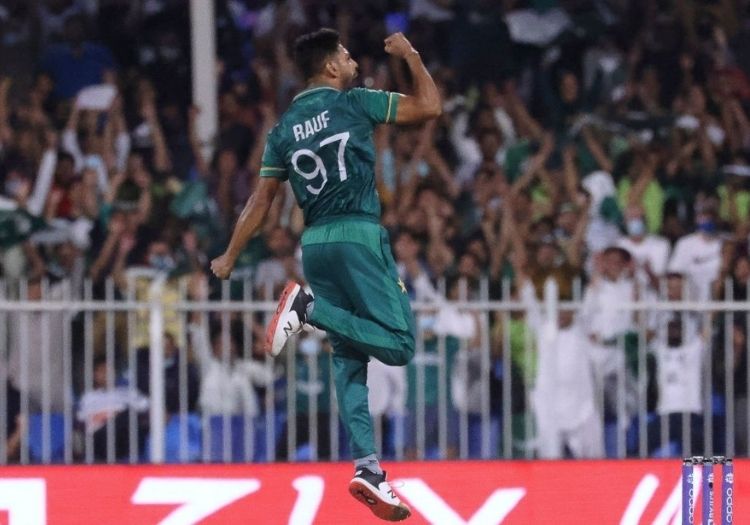 Pakistan’s T20 World Cup opener against India will be remembered, quite rightly, as the Shaheen Shah Afridi show. Playing in the biggest match of his career – he’d never played India in a T20I prior to Sunday’s match nor had he featured at a T20 World Cup – the 21-year-old recorded figures of 3 for 31 to tee up an historic victory for Pakistan.

On paper, it might not be the best four-over spell of his career (that came for Hampshire in the 2019 T20 Blast when he picked up 6 for 19, including four in four balls, against Middlesex). However, in terms of national importance and the players dismissed – Rohit Sharma, KL Rahul and Virat Kohli – he may struggle to surpass his achievement in Dubai for the remainder of his career.

Two days later against New Zealand in Pakistan’s second match of the tournament, the precocious young quick put in another tidy shift. Though he struggled to replicate Sunday’s potent swing on Sharjah’s new pitch, Afridi sent down 140-plus kph rockets from delivery one, opened the innings with a maiden, and picked up the wicket of Tim Seifert with his final ball of the day to finish with figures of 1 for 21.

However, on a day when all of Pakistan’s bowlers put in a solid shift, it was Haris Rauf’s turn to become his country’s fast bowling darling.

It may come as a bit of a surprise to learn the 27-year-old didn’t make his T20I debut – or indeed, his international debut in any format – until January 24, 2020 in the first of two T20Is against Bangladesh. Since then, the right-armer has missed just three of Pakistan’s 26 completed T20Is.

He’d also never taken a four-for in his T20I career prior to the New Zealand match, recording best figures of 3 for 29 against the same opponents in Auckland in December 2020.

But, in just the second T20 World Cup outing of his international career, he put in a near faultless display to not only record career-best T20I figures of 4 for 22 but also identify himself as one of the death bowlers to watch for the remainder of the tournament. 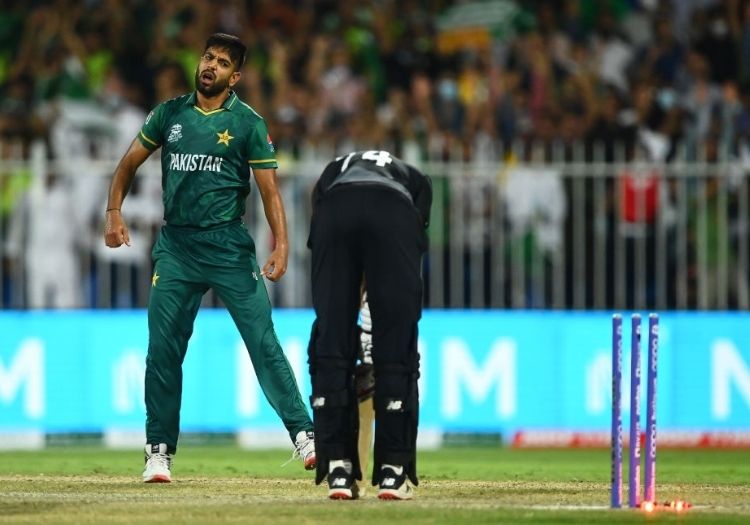 Introduced into the attack in the final over of the powerplay, Rauf was tasked with restoring the status quo after New Zealand had dispatched Hasan Ali for 15 runs. He struck with his second ball of the day, bowling Martin Guptill for 17, and conceded just six runs to slam New Zealand’s window of opportunity firmly shut.

He stayed out of the action for the next eight overs, inconspicuous in the field as Imad Wasim, Shadab Khan, Mohammad Hafeez and Hasan Ali went about their business, before being reintroduced in the 15th over and forming the centrepiece of Pakistan’s stellar death display which saw four wickets fall for 39 runs.

In the 15th over, he conceded five singles. In the 17th, he took two wickets in three balls to remove Devon Conway and Glenn Phillips, both of whom boast T20I strike rates in excess of 140, and conceded three runs.

And in the final over, he was hit for just his second boundary of the afternoon off the penultimate ball before seeking immediate revenge on Mitchell Santner, bowling him for six, to finish with figures of 3 for 16 from his second spell.

A special mention also had to go to batting hero Asif Ali, whose 12-ball 27 – including back-to-back sixes off the bowling of Tim Southee – rescued Pakistan from a rare off-day from the top order.

The 30-year-old, whose most recent 20-plus knock in international colours came way back in October 2019, finally transferred his always impressive domestic form onto T20 cricket’s biggest stage and added yet another string to this Pakistan side’s already overladen bow.

However, just as against India, this was a victory crafted by Pakistan’s fast bowlers and under the lights in Sharjah, it was Haris Rauf’s turn to deservedly take centre stage.

A remarkable day for Pakistan, for whom Shaheen Shah Afridi set the tone