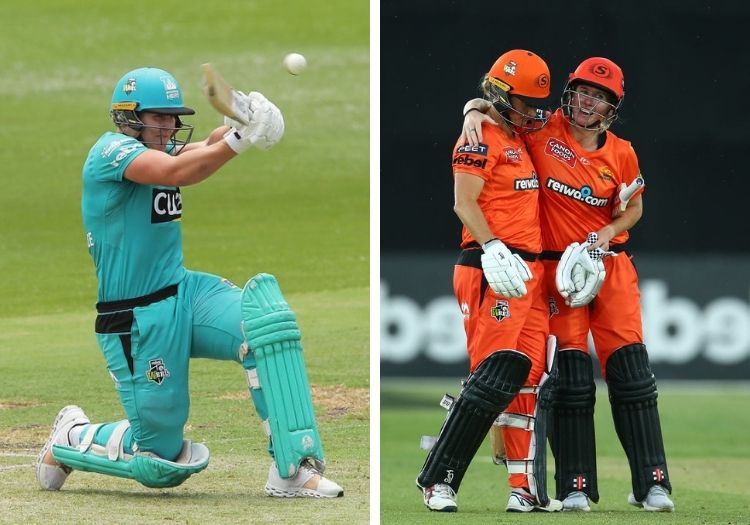 Brisbane Heat became the second side to book their place in the knock-out stage thanks to a fine win over table-toppers Melbourne Stars.

The already-qualified Stars retained Meg Lanning, Mignon du Preez and Nat Sciver in their XI despite having secured passage and reached 151 for 5 from their 20 overs.

Jess Jonassen's 35 looked to have sent Heat towards victory until a mid-innings wobble left them needing eight off the final over.

But Laura Kimmince hit boundaries from the first two deliveries of Annabel Sutherland's second over to secure a much-needed win and made a statement ahead of the knock-out stage.

Very likely to be on opposite sides of the draw, these two teams could yet meet again next weekend if they prevail in their respective semi-finals.

Stars won their first meeting earlier this month by 23 runs and will be eager to return to form before the knock-out phase.

Brilliant catch behind the stumps by Beth Mooney!

Scorchers on top of the 'Canes at North Sydney Oval: https://t.co/mmrAWF6uqH #WBBL06 pic.twitter.com/iOyjIEaNg5

The game of the day came at Drummoyne Oval where Sydney Thunder took a major step towards the next stage after edging past Adelaide Strikers.

Katie Mack's half-century and Stafanie Taylor's 33 helped put a solid total of 133 for 6 on the board.

Sammy-Jo Johnson was a constant scourge, however, taking 3-25 and influenced the run-out of Taylor, to ensure the Strikers were always hamstrung.

While Haynes' side secured a much-needed win to move to 14 points, their job is only half-complete.

What sore back? Sophie Devine returned from injury in devastating fashion and sealed it with a six

Scorchers leave Hurricanes in a spin

Just the second 10-wicket win of the group phase saw Perth Scorchers cement third place in the table with a thumping win over Hobart Hurricanes.

Corinne Hall's side look set for the wooden spoon and their effort never really got going thanks to a regular stream of wickets. Nicola Carey scored 36 and Emma Thompson's unbeaten 33 from 23 balls gave the innings some respectively.

Scorchers gave their net run-rate, which could be so crucial come the final calculations, a welcome boost with an imperious pursuit of the 135 needed for victory.

Sophie Devine was unable to bowl following her comeback from a back injury but that didn't prohibit her from smashing the ball to all parts with the bat. Her 87 from 53 deliveries included eight fours and five sixes.

Beth Mooney was in similarly destructive mood as the pair reached 140 without loss in just 14.4 overs, to record the 12th highest partnership in WBBL history.

Indeed, it is not the first time these two have hit their straps with the bat, having put on 151 earlier in the competition against Sydney Sixers.

While the two-time runners-up cannot yet celebrate a semi-final berth, anything other than a heavy loss to Strikers in the last match will be enough.

Sydney Sixers' hopes of reaching their maiden Big Bash League final are hanging by a thread after losing to Melbourne Renegades.

Victories earlier in the day for Scorchers and Thunder meant Renegades' hopes of qualification were over.

But that didn't affect their desire to upset the apple cart, plunging a dagger into Sixers' hopes of finishing in the top four.

A total of 166 for 4, punctuated by Alyssa Healy's 63 from 38 balls set Renegades an intimidating total.

But thanks to Lizelle Lee's lusty blows and some calamitous Sixers fielding they were able to claim back-to-back wins with a degree of ease.

Courtney Webb had earlier produced a fine catch to dismiss Elysse Perry and she was the scourge of the Sixers with the bat, twice surviving being put down.

One of the lives Webb was given came courtesy of a collision between Perry and Dane van Niekerk and helped Amy Satterwaite's side come from behind the rate to win by six wickets and with five balls left.

Sixers now need a heavy win in their final game against Stars and for either Scorchers or Thunder to lose badly.