THE WEEK IN NUMBERS: Yasir and Watling record disparate doubles

It's a numbers game! Here The Cricketer takes a look back at some of the stats to come out of the world of cricket this week... 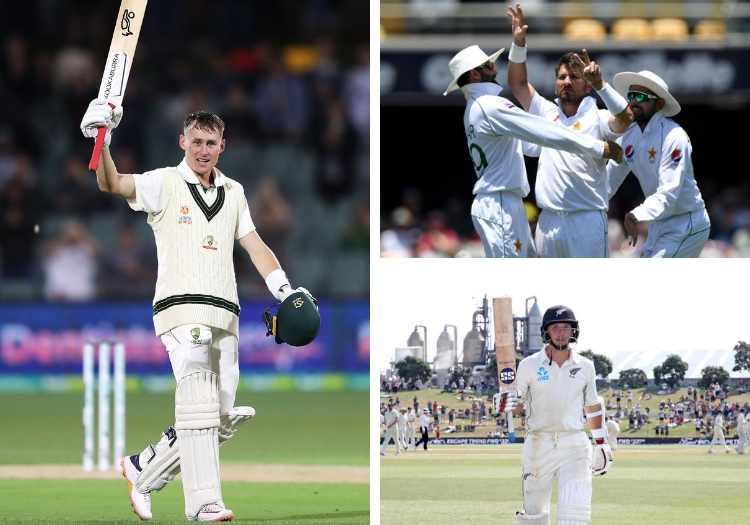 Australia’s Marnus Labuschagne and David Warner have both registered back-to-back centuries against Pakistan.

Warner followed up his 154 at the Gabba with an unbeaten 166 - his 23rd Test hundred - on day one in Adelaide.

Labuschagne struck his maiden Test hundred (185) in Brisbane and picked up where he left off in South Australia, rolling out an unbeaten 126 against Azhar Ali & Co.

At the close of day one at the Adelaide Oval, Labuschagne had 793 Test runs to his name in 2019, more than any other cricketer in the year so far.

Yasir Shah picked up an unwanted record at the Gabba. The Pakistan spinner finished with figures of 4-205 as Australia piled on the runs in Brisbane. Yasir’s 205 are the most runs conceded by a bowler at the Gabba in Test history, knocking Mushtaq Ahmed’s 194 in 1999 off the top spot.

Furthermore, that Brisbane battering was the third time Yasir has conceded 200 or more runs in a single Test innings - the first bowler to do so on more than two occasions. Vinoo Mankad and Saqlain Mushtaq both had the honour twice.

On a brighter note for Yasir, the 33-year-old has now dismissed Steve Smith seven times in Test cricket, with the Australian averaging just 27.28 against the bowler. Only England’s Stuart Broad (eight) has got Smith out more times.

Speaking of Stuart… Broad is now just one behind Courtney Walsh in the first-ball-duck charts. The Englishman was trapped lbw first ball by Neil Wagner as New Zealand wrapped up the victory at Bay Oval - his ninth golden duck in Test cricket. Just Walsh (10), Rangana Herath (11) and Murali (14) have more to their names.

New Zealand made England suffer in the field as they posted 615-9d in Mount Maunganui - smashing their highest total in Tests against the touring side. The Blackcaps’ previous best was 551-9d at Lord’s in 1973.

BJ Watling’s Maunganui marathon, which consumed 473 deliveries, was the 10th double-century by a specialist wicketkeeper in Test cricket, and the first against England.

Bangladesh’s Mushfiqur Rahim is the only wicketkeeper to score a Test double on two separate occasions.

Brendon Kuruppu’s 201* for Sri Lanka against New Zealand in 1987, which lasted 548 balls, is the only Test knock by a wicketkeeper to absorb more deliveries than Watling’s 473.

Alongside Watling, Mitchell Santner (126) punched in his maiden Test hundred, sharing a 500-ball stand with the man at the other end.

This one doesn’t make great reading for England fans…

India dispatched Bangladesh by an innings and 46 runs at Kolkata to become the first Test side to record four consecutive innings victories. South Africa were twice put away by an innings in October, at Ranchi and Pune, before Bangladesh suffered the same fate at Indore and then Kolkata.

Since drawing with Australia at the SCG in January, Virat Kohli’s side have won seven straight. West Indies were defeated 2-0 in the Caribbean. A 3-0 series win over South Africa on home soil followed before chalking up two more against Bangladesh.

India’s next Test campaign sees them travel to New Zealand for a two-match series in February 2020.