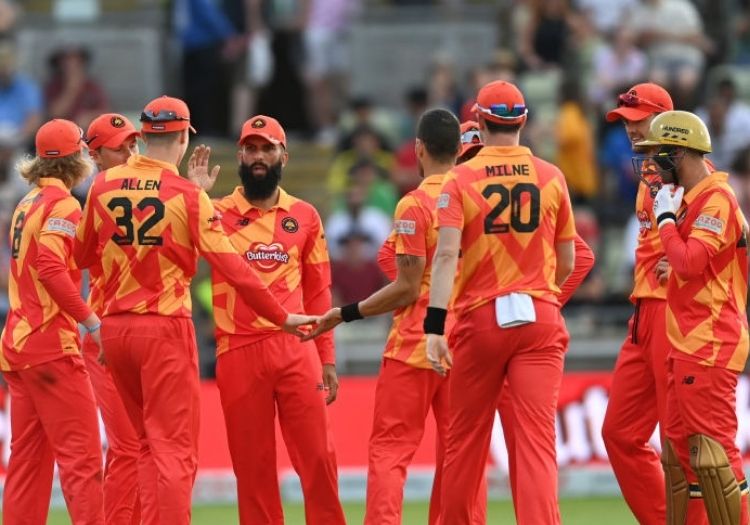 Trent Rockets have lost their 100 per cent record in The Hundred after suffering a six-wicket defeat at the hands of Birmingham Phoenix at Edgbaston.

The Rockets posted 144 for 6 from their 100 balls - their highest knock of the tournament to date  - with Dawid Malan scoring a half-century.

However, a blistering opening partnership between Will Smeed and Finn Allen gave Phoenix an early advantage and the home side cantered to victory with 26 balls to spare.

Ball 6: Hales off the mark! First boundary of the day for Alex Hales off his fourth ball of the day, chipping Tom Helm to deep extra cover for four.

Ball 9: SIX! Hales is in the mood! Cool as you like, he dispatches the ball into the stands.

Ball 10: Easy runs. Helm has taken a beating in his first set, conceding 18 runs as Hales hits him for three fours and one six.

Ball 11: Short OUT! Adam Milne makes the breakthrough and it’s the competition’s second-highest run-scorer, D’Arcy Short, who departs, spooning the ball into the hands of Imran Tahir at short fine leg. 21-1

Ball 25: Back to back FOURS! After weathering the pace of Milne and Pat Brown, Hales ends the powerplay on a high by dispatching Phoenix captain Moeen Ali for twin boundaries. Trent Rockets are 41 for 1 after 25 balls.

Ball 35: SIX! Dawid Malan is off the mark but only just! Brown leaps like a salmon on the long on boundary but can only catch the ball beyond the boundary rope – could have been a worldie.

Ball 58: FOUR! Dawid Malan’s first boundary for 23 balls and a much-needed four for the Rockets. This one is a pitched up delivery from Benny Howell which is guided to the cover boundary.

Ball 63: SIX! Samit Patel wallops Moeen over long-on and sparks panic in the packed Edgbaston stands. And then he follows it up with a crisp four. 13 off the set.

Ball 68: SIX more! Patel again, whipping his bat through and sending the ball soaring past Milne on the midwicket boundary. The Nottinghamshire veteran is beginning to motor.

Ball 76: Patel OUT! Howell returns to the attack and strikes immediately! Patel attempts a slog sweep but is no match for Smeed on the boundary, who takes a fine catch over his shoulder to send the 36-year-old back to the pavilion for a handy 31 (19 balls). 106-3

Ball 84: Malan DROPPED! Miles Hammond takes a fine diving catch at cow corner, but the ball pops out as his elbows hit the ground and trickles to the boundary. Nightmare for the Gloucestershire batter.

Ball 86: Gregory OUT! A fine comeback from Helm after being thrashed for 18 off his previous five balls. He tosses Lewis Gregory a slower ball and the Rockets captain top edges it through to the keeper Chris Benjamin. 119-4

Ball 91: Malan OUT! Mooooooeeeen! A poor hit from Malan goes straight to Moeen at cover and the Phoenix skipper fizzes a direct hit into one stump with the England batter miles short. An absolute peach of a throw. 127-4

Ball 95: Khan OUT! A death bowling masterclass from Milne! A lovely selection of slower balls and knuckleballs before Rashid Khan skies his final delivery straight to Liam Livingstone at deep point. 128-6

Ball 97: SIX! Facing his first ball of the day, Tom Moores gets a maximum over long-off.

Ball 99: SIX! Now Matt Carter gets in on the act, heaving Brown’s delivery into the leg-side.

Trent Rockets finish their innings with 144 for 6, their highest score of the competition to date. Could be tricky for Birmingham Phoenix given the strength of the Rockets bowling attack.

Ball 4: Twin boundaries for Allen! Phoenix are off the mark early, with Finn Allen picking off his Lancashire teammate, Luke Wood, for a pair of boundaries down to backward square leg.

Ball 20: Boundary fest! Oh it’s a horrible over from Timm van der Gugten, who is hit for two sixes and two fours by Smeed. That’s six boundaries for Phoenix from the last eight balls they've faced.

Ball 22: Smeed OUT! Khan makes the breakthrough, deceiving Smeed with a short ball and the 19-year-old picks out Short at deep midwicket. 60-1

Ball 25: Advantage Phoenix! Birmingham finish the powerplay on 60 for 1, 19 runs ahead of Trent Rockets at the same stage and with Allen and Moeen in the middle.

Ball 36: SIX! Patel and Khan kept Allen quiet for a while but a loose delivery from Carter is picked off by the young New Zealander who moves to 33 runs from just 14 balls.

Ball 50: Moeen OUT! Moeen gave Patel the runaround with the first four balls of his set, smashing the veteran allrounder for a pair of sixes over deep midwicket and a four. However, his sweetly hit slog-sweep falls straight into the waiting hands of Luke Wood. 104-2

Ball 55: Allen OUT! Allen attempts to reverse sweep Khan but is bamboozled by a googly and bowled! Livingstone is the next batter in but the momentum is just beginning to shift a little. 111-3

Ball 62: SIX! Livingstone just squeezes the ball past the outstretched hand of van der Gugten to claim his first six of the day.

Ball 65: Another SIX! Livingstone versus van der Gutgen part two and again, the Cumbrian wins as the fielder can only tip the ball over the boundary goalkeeper-style. An expensive set from Short.

Ball 67: Hammond OUT! It's Khan again, this time bowling Miles Hammond for four. Sadly, with 11 runs needed off over 30 balls, it won't make too much of a difference. 134-4

Ball 70: Boundaries for Benjamin! A cracking cameo for Benjamin who hits his second and third balls of the day for four. Three runs required.

Ball 74: BIRMINGHAM PHOENIX WIN! A single for Livingstone sees them over the line.

Hero of the match, Will Smeed, was understandably thrilled with his debut appearance in The Hundred, commenting: "There were definitely a few nerves, playing in front of such a big crowd for a new team and I was very keen to make an impact, but they quickly went when I got out there.

"We bowled really well and kept them to a reasonable score so Finn and I just went out there to try and get us off to a good start. We needed a win after we have a close loss the other day. The boys were gutted after that so it's good to come out of this on the other side against a really strong Trent team.

"It was an amazing atmosphere to play in. I noticed it more when I was fielding because when I am batting I am more just watching the ball. But it was amazing to hear the cheers when you hit boundaries. I was trying to feed off that and hopefully I can do it again."

Trent Rockets captain, Lewis Gregory, meanwhile, admitted his side were not at their best at Edgbaston.

"I don't think we were quite at our best in all facets of the game, to be honest, but it's one of those formats where that can quite easily happen," he said."We never really got a grip on them when they were batting. They got off to a flyer and got ahead of the game and we struggled to drag them back. I think we had a pretty par total but we needed to take early wickets which we couldn't do.

"But we have played some brilliant cricket so far in this competition and I fully expect us to continue to do that. We are in a fantastic spot in the group table halfway through the group stage and we have a few days now to get away and chill out and then come back at Cardiff on Friday."