Under the floodlights at The Oval on a warm evening, the ECB's new competition got underway in style as the home side fought back from what seemed to be an almost certainly lost position 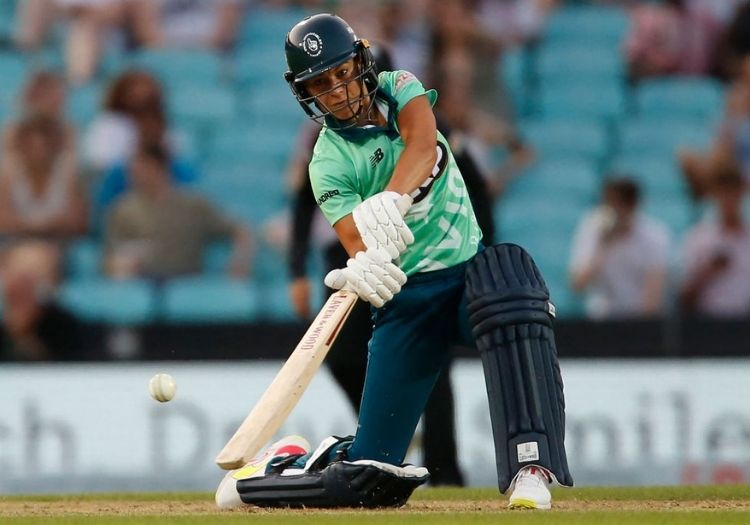 The first game of The Hundred, for all of its build-up, debate and late squad changes, was a thoroughly entertaining affair. Boosted by the musicians and the lights, the Manchester Originals took a while to get started as the sun set in Kennington, but managed to push through to a very respectable score of 135, courtesy of Lizelle Lee, Georgie Bryce and Harmanpreet Kaur. These sides will have not had long to gel - indeed, some are familiar with one another from county competition but not with their drafted teammates. There's still plenty of room for the sides to get on the exact same wavelength, but both teams tonight put in honourable shifts as a collective.

Indeed, a new chapter of tactical analysis will be written with The Hundred. Who bowls five? Who bowls ten? With only oh-so-many balls, how far down the batting order could a finisher really be placed? It was a test of captaincies for both sides, and both skippers rose firmly to the test. Van Niekerk, of course, led from the front. Coming in at four with her side's chances on the WinViz were condemned to a mere 19%, but she rebuilt at the crease with her compatriot and wife Marizanne Kapp.

The pair built a partnership of 73 off 51 balls, which was enough to put the game back in their favour. The Originals will be regretting their ruthlessness in the field - or their lack thereof, as they put down three chances, including that of Van Niekerk, but there was only so much that Kate Cross could have controlled, having added 12 off 4 with the bat and taking 3-28 in the chase.

The women's game, which is to be played alongside the men's competition in the coming month, is set for its biggest domestic audience yet. Alex Hartley, the Originals' right-arm seamer, recognised the situation, stating she'd "never been prouder to lose a cricket game". The crowd was enthused, cheering and dancing throughout the night - thanked by Van Niekerk, who stated: "I felt the atmosphere. The fans pushed us over the line". The Oval is one of the best selling venues for The Hundred - tonight's attendance of 7,395 will only grow from this stage. "In the times we are [in], it's always amazing to play in front of the fans. It was one of the top moments of my career", the Player of the Match added.

Having won the toss on the stage at The Oval, where the DJ, singers and dancers also plied their trade, Manchester Originals put themselves into bat.

Ball 7: Review and out! The first dismissal of The Hundred. Emma Lamb looks to drive at Marizanne Kapp’s delivery, but umpire Robinson isn’t interested. After a quick review, an obvious spike on ultra-edge sends Lamb on her way. 4-1

Marizanne Kapp picks up the first-ever wicket in The Hundred!

Ball 14: Two boundaries on the trot! Tash Farrant bowls it full to Lizelle Lee who makes no mistake to use the bounce and the pace to smash the ball through the covers for four. 14-1

Ball 48: Gone, and a big wicket for the Invincibles! Mady Villiers tempts Georgie Boyce into stepping into the shot, but finds Georgia Adams on the circle. The partnership had returned more than 50 runs and an important breakthrough.   59-2

Ball 70: Another four for Kaur! That’s four in the last five now. The delivery is put right into the so-called “slot” and is duly dispatched to the boundary. She's played this over with real panache and class. 96-2

Now THAT is how you hit a cricket ball! ☄️ pic.twitter.com/Mr0KL2kDmw

Ball 71: Tash Farrant takes a key wicket! Lee looks for the big shot over cover, but can’t find the middle of the bat. Grace Gibbs reacts quickly and covers the 10-or-so yards needed to get under the ball for the catch. 96-3

Ball 85: Kaur’s hard-hitting innings comes to a close. She looks for another clever shot to chip over the circle behind her left shoulder, but Danielle Gregory is perfectly positioned to gobble up. The first strategic time-out is taken. 108-4 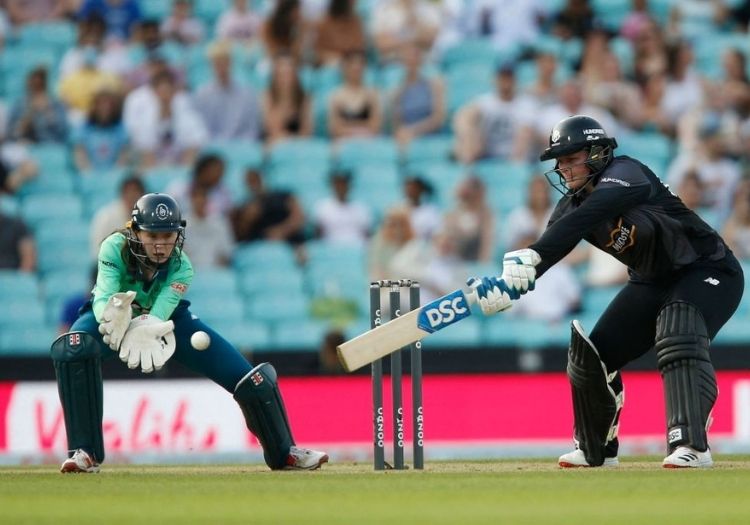 Ball 90: Kapp strikes again, with a change of pace. Mignon du Preez looks for the big shot, but it’s not long enough and Mady Villiers at deep midwicket hardly has to move. 113-5

Ball 95: The first maximum of the competition, and what a shot this is! Kate Cross takes a step out and thwacks Dani Gregory back over her head for six. 126-5

Ball 98: What’s that adage about London buses? Sophie Ecclestone has absolutely pummelled this into leg side, comfortably over the on-looking fielders for six - handy runs here. 133-5

The first of #TheHundred as Originals captain Cross hammers over the rope at long-on - and isn't she happy about it! 😁

Ball 99: But stumped this time! Ecclestone goes for another big shot but can't get the contact. Sarah Bryce makes no mistake in whipping off the bails with the batter one step out of her crease. 133-6

And so, the home side would need to find 136 runs off their 100 balls to get the victory.

Ball 5: Capsey is off the mark in style! The 16-year-old doesn’t wait around to get started, taking a step down the track and thumping it over mid-off. One bounce and four. 5-0

Ball 7: But she’s gone now! Capsey looks for the nifty scoop shot down to fine leg, but unfortunately for her the ball scrapes the edge of her bat and Eleanor Threlkeld behind the stumps reacts quickly for the grab.  7-1

Ball 8: Out - bowled! Kate Cross is on a hat-trick! The dangerous Grace Gibbs has to go as she looks to flick away to leg, but is beaten by the flight. The bails light up, as do the faces of the Invincibles fielders - what a start for the hosts. 7-2

Ball 16: Gone again! Laura Jackson comes into the attack and strikes with her very first ball. Fran Wilson shuffled back to give herself space to try and loft over mid-off, but Harmanpreet Kaur at mid-off stepped across and dove to her right excellently for the mid-air grab - Invincibles in early trouble here. 12-3

Ball 25: Massive shot from van Niekerk! The South African slogs away against the spinner with the ball tossed up, and effortlessly hauls the ball over mid-off for a maximum. 32-3

Ball 32: Georgia Adams is dismissed! It’s Kate Cross again who is absolutely on fire. Adams looks to fire through midwicket but can’t find the middle of her bat, and Laura Jackson on the circle is in prime position for the grab. 36-4

Ball 35: Van Niekerk is leading the Invincibles counter-charge here with another boundary. Cutting it fine yet powerfully, she beats the fielder at third man for four. 41-4

Ball 49: Important four for the Invincibles. It’s a slower one this time, inviting the slog, but Kapp pushes it square and beats the onrushing fielder. The home side’s rebuild is underway. 57-4

Ball 62: Put down! Kaur took a much more difficult one than that earlier, though she did have to fall into it. Van Niekerk couldn’t quite get under the shot and doesn’t get the height, but she gets a reprieve from the fielder. 73-4 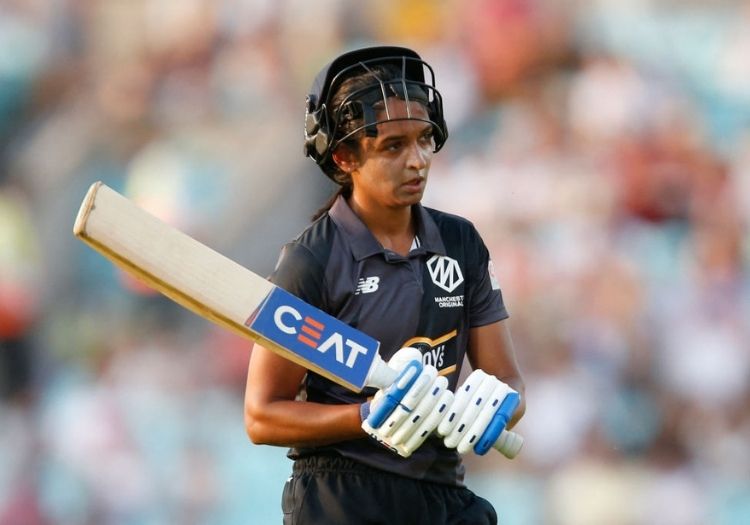 Ball 69: Another drop, and six! Harmanpreet Kaur lures Marizanne Kapp into the big shot over the leg side, but it’s falling a few yards short of the rope. However, Mignon du Preez misreads the flight of the ball, grabs it above her head but can’t hold on and over it goes. Pressure on the Originals now. 87-4

Ball 82: Six again! Kapp decides to attack Ecclestone, and with good footwork thwacks the ball viciously over the bowler’s head. All to play for here. 108-4

Ball 83: Wicket! And just like that, the Originals strike back - and this is wonderful glovework. Kapp looks to continue her attack by flicking it into the on side, but is beaten having taken a step down the track. Wonderful reflexes from keeper Threlkeld to dislodge the bails, confirmed by the third umpire. 109-5

Ball 86: The Originals put down their third catching chance of the evening! Van Niekerk goes for the sweep - and a regulation chance is down. Trying to attack with a change of shot style, the strike lacks pace, Georgie Boyce is in prime position for the grab but it doesn’t stick. 113-5

Ball 92: Villiers has just walloped this over long-on! With wonderful footwork, the 22-year-old takes a few yards down the track and sends it into the stands. 128-5

Ball 98: The captain Dane van Niekerk wins it for Oval Invincibles! With just one needed of three, the skipper swipes, edges and gets four. From what looked to be an almost certainly lost position, the middle order have done the trick. 139-5