JAMES COYNE AT THE UPTONSTEEL COUNTY GROUND: Marcus Harris is doing his Ashes hopes no harm at all with the third century of his Championship stint at Leicestershire

Grace Road is reckoned to be the world’s biggest first-class playing surface after the MCG, so it’s probably no wonder Marcus Harris has made himself at home.

The left-hander has scored three of his 18 first-class hundreds at the MCG, and he now has three in his last four innings at Leicestershire’s HQ.

For all that crossover success, it’s doubtful that when Harris straps on his pads at the MCG for Victoria or Australia he does so in a building with asbestos in the corrugated roof, as has been the case with The Meet Café & Bar at Leicester, which has been converted into the makeshift home dressing room during the pandemic.

Back in 1999 a fire during an Aussie Rules game put paid to the old Melbourne scoreboard, and we are well accustomed to the electronic replacement, as we are on most Test grounds in England and Australia.

Here at Grace Road, though, Harris ‘kept the board moving’ in the classical sense, as the two human operators of the manual scoreboard (one of the last remaining two on the county circuit, along with Canterbury) were kept busy rotating Harris’ score through the day.

It all added up to a great day for Leicestershire, as they sought to build on their first win of the Championship campaign last week against Middlesex.

By the close they were 357 for 5 against Gloucestershire and the Foxes ultra in the Uptonsteel Stand (formerly known as the Popular Side) was gleefully honking his horn and blowing his whistle at every opportunity. 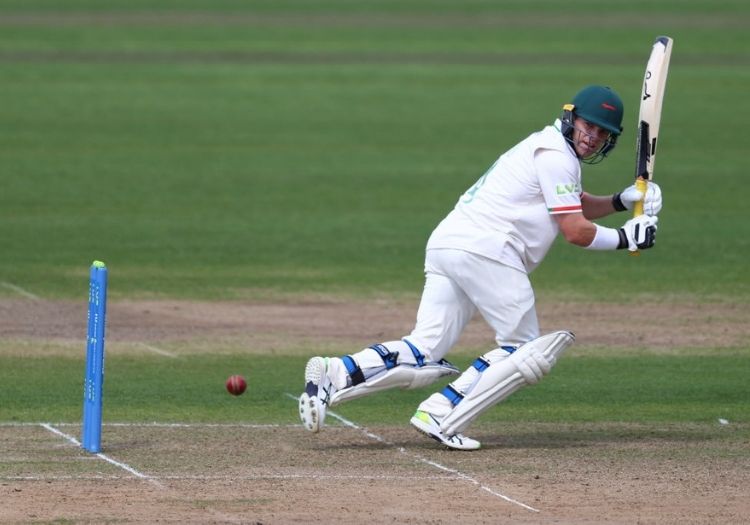 Gloucestershire, leading this group of the LV= Insurance County Championship but in danger of surrendering their advantage after defeat by Surrey in their last game, made the mistake of letting Harris and Colin Ackermann bed in together again.

Last week the pair put on 243 to chase down 378 in a match where Middlesex had dictated terms for most of the time; this week they have set the tone for Leicestershire in a partnership worth 160 for the third wicket.

It’s easy to forget that Harris is technically Australia’s incumbent Test opener heading into the next Australian summer: he opened in the epic fourth Test at Brisbane against India back in January, after Joe Burns fell out of form and the ill-starred Will Pucovski suffered his latest malady.

The selectors proved unable to ignore the leading run-scorer in the Sheffield Shield over the previous five seasons – and 695 at 63 in 2020/21, a rich vein which included the all-time Shield partnership of 486 with Pucovski. His first-class numbers are very strong; his Test numbers much less so.

His comeuppance in the 2019 Ashes in England came when Stuart Broad and Jofra Archer squared him up from around the wicket. There was no obvious weakness in that department today, with the obvious caveat that Gloucestershire’s medium-fast bowlers are obviously not in that duo's class, even if Ryan Higgins has bowled more overs in the Championship than any other seam bowler.

It remains to be seen whether Harris has ironed out those problems sufficiently to take his place alongside David Warner in Australia’s home Tests against Afghanistan and then England in a few months’ time, but if he keeps scoring runs like this he will surely be in the conversation.

In fact this was more of a trial by spin than Harris probably expected when he sought a county stint.

If Shane Warne was unable to contain his apoplexy from the other side of the world at England’s refusal to pick Jack Leach in dry conditions at Lord’s, then there was no risk of the spinners going underused today at Grace Road. The track had variable bounce from the start, was turning at the fuller lengths, but appeared to quicken up through the day when the seamers went shorter.

One of those spinners was Glenn Phillips, Gloucestershire’s overseas replacement for Kraigg Brathwaite, and yet another South African émigré whose family decided to make the move to New Zealand a few years ago.

Phillips is primarily a gallivanting batsman and T20 wicketkeeper, but in first-class cricket is an off-spinner with decent loop. He had been thrown the ball by 12.30pm, and was bowling in tandem with the left-arm spinner Tom Smith up to lunch.

The opener Sam Evans had already smashed one ball from Phillips against the prone short leg Tom Lace when, later in the over, he plopped one rather more invitingly into Lace’s hands.

When the pair were finally broken, to the second ball after tea, it was another part-time off-spinner, Miles Hammond, who turned one through the gate to bowl Ackermann. Hammond bowled a lot for England Under-19s, but in his county career he has become a destructive top-order batsman, one more identifiable in the field than most, by dint of his headband and wayfarers under his white floppy.

It was Phillips again who finally removed Harris for 148, lbw trying to advance down just before the second new ball.

Right at the start we had the unusual spectacle in the first hour of a Championship game of an opening bowler (Dan Worrall) bowling with the new ball at an opening batsman (Sam Evans) with three short midwickets and two short covers. It was a short-lived theory tried out only on Evans.

There was another amusing curio – one unique to this ground, this strip, and this pandemic. It just so happened that the strip being used in this match was the one nearest the drainage covers at either end of the square.

As the players limbered up before play Smith was noticeably perturbed about his footing being disrupted by the drain flap at the Pavilion End when bowling over the wicket, to the extent that he quizzed the Leicester groundstaff about it.

When Smith bowled at that end in the afternoon session, he initially came around the wicket to avoid the flap entirely, even when bowling to the left-handed Harris. He eventually switched sides and had to tiptoe around the disruptive manhole cover.

Ultimately, though, Smith made the best of the inconvenience: as bowlers are not currently allowed to hand their caps to the umpire during an over, he casually opened the drain flap and concealed his blue Gloucestershire cap underground while he bowled.

No risk of incurring five penalty runs down there…