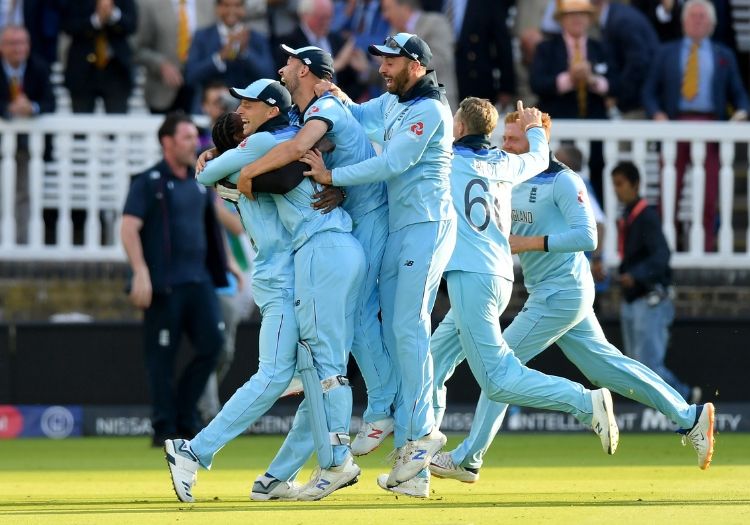 England have won their first men's World Cup after a super-over victory over New Zealand on a dramatic day at Lord's.

The sides could not be separated after 100 overs, with both sides making 241 runs from their allotted overs to send the game into a stunning finish which saw everything decided in just 12 balls.

Fifty from Henry Nicholls saw New Zealand set a total of 242 to win, but then Ben Stokes came with a riposte of 84 to ensure England tied with the Black Caps.

However, after Stokes and Jos Buttler hit 15 off their six balls from Trent Boult, New Zealand fell short on boundaries hit as Jofra Archer delivered the most important over of his England career.

Kane Williamson won the toss and chose to bat first in overcast conditions, but were under the cosh straight away from Jofra Archer and Chris Woakes, who took the first wicket of Martin Guptill inside the opening powerplay.

The New Zealand captain then enjoyed a partnership with Henry Nicholls, who scored the only fifty of the Black Caps innings, before Liam Plunkett came into the attack and took the scalps of the duo to bring about a mini-collapse.

The Surrey allrounder was the standout as wickets fell at regular intervals, but 47 from Tom Latham propelled the Kiwis to a competitive score above 240.

England survived a few early scares in their reply, and just as it seemed like Jason Roy and Jonny Bairstow were set, the former nicked behind to Latham.

Joe Root made just seven off 30 deliveries before he feathered a wide one, before Bairstow chopped back onto his stumps.

England captain Morgan fell soon after but that brought Stokes and Buttler to the crease, who shared a partnership of 110 runs without many shots in anger.

Buttler's half-century arrived in just 53 balls and the Durham allrounder's in 81 balls but the England keeper eventually holed out to substitute Tim Southee out in the deep.

Chris Woakes, Plunkett, Archer and Adil Rashid fell at the death, as did Mark Wood off the final ball when coming back for a second to  send the game into a super over with both sides tied on 241.

But England held their nerve to record a first World Cup triumph since the first tournament in 1975.