Chamari Atapattu finished unbeaten on 78 from just 50 balls as Sri Lanka chased down England's effort of 122 for 9 in just 12.3 overs 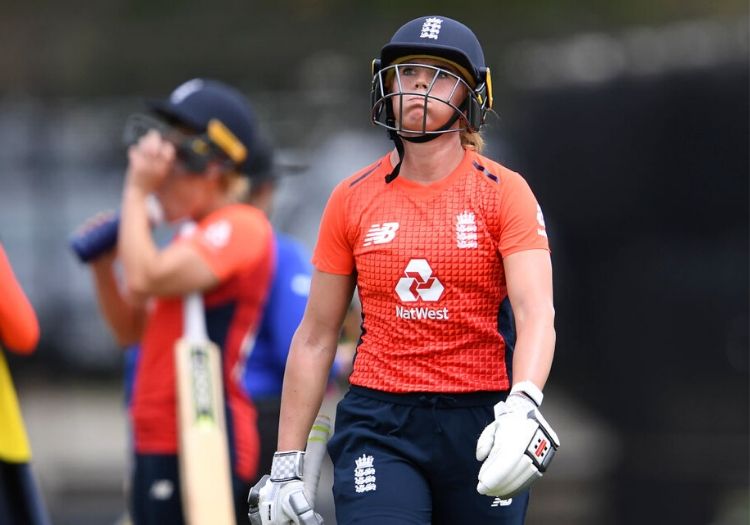 England suffered a major setback to their T20 World Cup preparations in their last warmup game ahead of the tournament after being thrashed by Sri Lanka in Adelaide.

Chamari Atapattu’s side have never beaten England in an official T20I – a record that still stands, but their ten-wicket victory over Heather Knight’s team at the Karen Rolten Oval will have caught the attention of all those in Australia ahead of the competition, which begins on February 21.

With Nat Sciver still missing due to a knee problem that also ruled her out of the practice win over New Zealand, England opted to bat first after winning the toss.

The form of openers Danni Wyatt and Amy Jones is fast becoming a cause for concern, however. Not once in six games in 2020 have the pair managed to see out the powerplay together, while their highest stand since Lisa Keightley took charge is just 41. Jones’ highest score of the tour is 23 - coming in this game, while Wyatt’s is 42.

That record showed few signs of improvement against Sri Lanka, with Wyatt falling just seven balls into proceedings. With Sciver unavailable – England expect her to be fit for their opening game on Sunday, Fran Wilson was pushed up the order to No.3. Yet, after she was run out and Jones followed shortly afterwards, the innings subsided in rapid fashion.

Lauren Winfield, batting at No.5 in this game to provide her with time in the middle, joined Wilson in being run out, before Katherine Brunt’s run of meagre returns with the bat continued. She has made just 33 runs in six games in Australia – 23 of those came in one late flurry against the hosts in a tri-series clash. Tammy Beaumont, at No.4 in this game, made 23 and Knight struck 19 as England reached just 122 for 9.

There were four wickets for Shashikala Siriwardena, the veteran off-spinner, while Atapattu chipped in with three scalps of her own.

Atapattu’s T20 World Cup record is strangely poor for a player of her stature. She has passed fifty just once in 20 games. However, she will enter her country’s first game – against New Zealand on Saturday – in prime form. She hit centuries against Australia in both T20I and ODI formats in late 2019, before punishing England in Adelaide.

She finished unbeaten on 78 from just 50 balls, while Hasini Perera supported her by making 29 off just 25 balls. Atapattu was particularly savage towards Sophie Ecclestone; the left-arm spinner was taken for three sixes in her 2.3 overs.

England bowled 13 wides in the 12.3 overs that Sri Lanka needed to reach their target: a humbling defeat for Knight’s side, regardless of the circumstances.

Sri Lanka have never won a T20I by ten wickets, while England have never lost one by such a margin. And while the match did not have T20I status, it is a marker of the scale of this victory for Atapattu’s side.