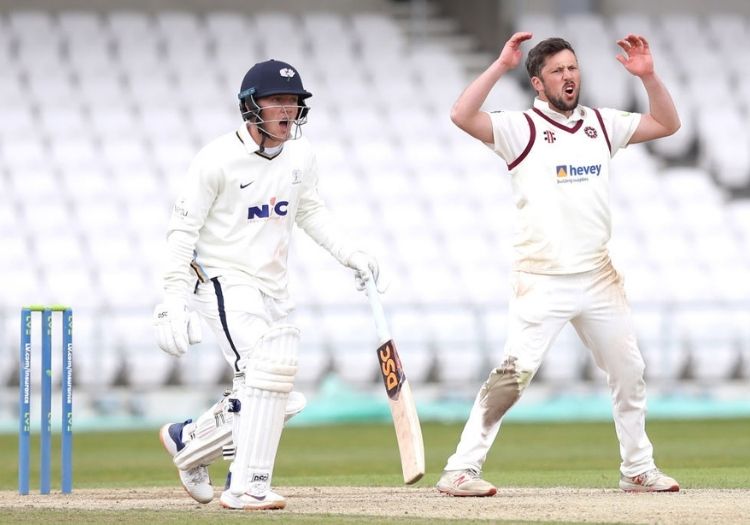 Essex worked their way through some dogged Worcestershire batting to continue their push for victory on the third day at New Road.

The bowlers persevered, though, led by spinner Simon Harmer whose  figures of 3 for 75 included a late-morning burst of three wickets for four runs in 22 balls.

The home side has work still to do to reach the follow-on figure of 412 on the final day. If they achieve that, the game appears destined for a draw.

When the home side could add only 90 to their overnight score of 178 for 4, Steve Finn finishing with 5 for 77, they conceded a first innings lead of 89 runs.

Chris Wright’s career-best 7 for 53 gave Leicestershire a chance to press for a first victory of the season as they took a lead of 271 by the end of day three.

He almost single-handedly bowled the hosts out for 275 at Bristol, to take a first-innings lead of 146, before his side’s batsmen made 125 for 3 by the close.

It was a 14th first-class five-for for Wright, who turns 36 later this summer and is in the final year of his contract.

David Willey dented former county Northamptonshire’s hopes of claiming a rare Championship victory at Emerald Headingley with runs, a wicket and a run out on day three.

Willey’s unbeaten 41 from No.10 in Yorkshire’s order was their top score of a second innings which recovered from 86 for 6 to 247, setting a 220 target at tea.

Leaders Lancashire are favourites to win their third LV=Insurance County Championship match of the season despite conceding a first-innings lead of 98.

They responded by bowling Sussex out for just 154 to set themselves a target of 253 and then openers Alex Davies and Keaton Jennings got their second innings off to a flying start with a stand of 102 in 20 overs.

Davies led the way with a 59-ball 73, with 10 fours and a pulled six over square leg off Henry Crocombe before he was bowled by Stuart Meaker.

And Jack Carson gave his side a lifeline with the late wicket of former Sussex player Luke Wells, who was lbw padding up.