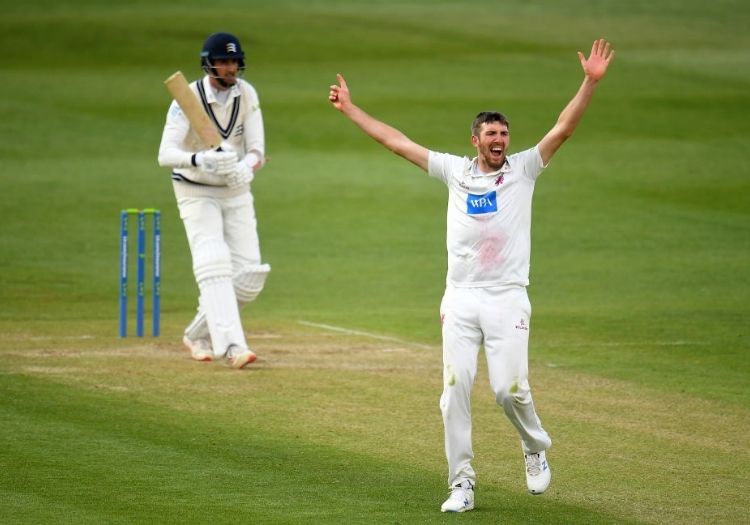 It was a day that began damp and with difficulty for Somerset, but ended with the sun setting serenely over the Quantocks with the home side just about favourites to secure a season's double over Middlesex.

Somerset do not do things easily, and James Hildreth’s dismissal with less than four overs remaining for a brisk 43 off 38 balls took a little gloss off proceedings. Nightwatchman Jack Leach fell too, fending Steve Finn to short leg for the second time to bring about stumps but, as was the case at Lord’s last month, Tom Abell (43 not out) will report for Sunday school knowing what is needed to secure victory.

This time, though, his side will need to make the further 103 runs required without the services of Lewis Gregory, who was withdrawn from the game ahead of the day in place of Jack Brooks.

Having watched Hildreth break Somerset batting records on Friday while running the drinks, Brooks ensured his own place in the history books by becoming county cricket’s first Covid replacement.

Gregory’s partner reported Covid-like symptoms on Saturday morning and, while she returned a negative lateral flow test, under government guidelines Gregory will remain in isolation pending the results of a follow-up PCR test.

It was galling news both for Somerset – who lost one of their premier allrounders – and for the player himself, who previously tested positive for Covid while on duty for Islamabad United in March. That forced him to spend 25 days in quarantine during the month following the tournament’s postponement, first in Pakistan and then back in the UK. He also spent a mandatory two weeks in an Australian hotel room in December ahead of his spell with Brisbane Heat in the Big Bash. Has any cricketer spent more days self-isolating? 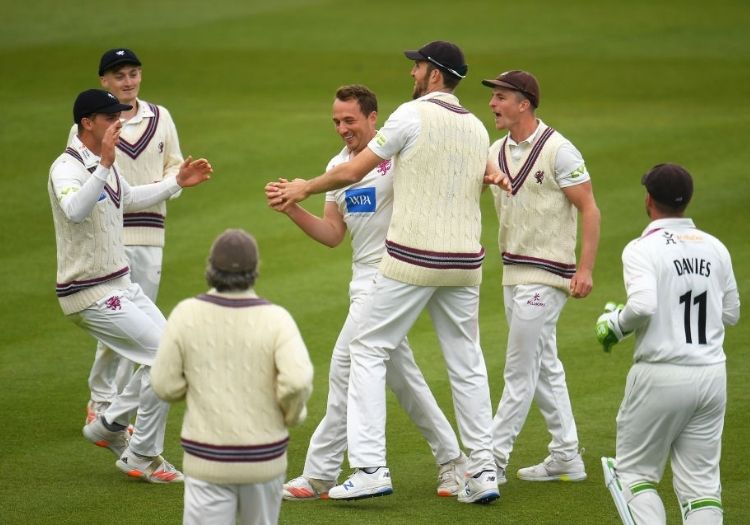 Somerset will be hoping to claim victory on day four

Intriguingly it was Brooks who came in ahead of Somerset’s overseas star Marchant de Lange, who was left out of the starting XI despite bowling on the outfield ahead of play. The ECB’s Covid replacement regulations require, so far as possible, a ‘like-for-like’ replacement to be nominated and it is possible that the South African’s ability to touch 90mph led match referee Wayne Noon to deem him unsuitable.

Would Somerset be left to rue Gregory’s absence? Well, on today’s evidence not with the ball – although they could still miss his batting on day four. Gregory did, after all, score a quickfire 62 at Lord’s, having come in with 98 still required.

Craig Overton will take many of the plaudits – and rightly so, he was outstanding, returning figures of 5 for 24 in 19 overs. He now has 55 wickets since the start of the Bob Willis Trophy at a cost of less than 14 each. If he does not return to the Test side at the start of June, he will be well entitled to query what more he needs to do. He also has four half-centuries across those nine games.

But it is Josh Davey, the robin to Overton’s batman, who deserves much credit for masterminding the downfall of his former employers. The Scot has become an integral and unsung part of the Cidermen’s attack over the past couple of seasons, having arrived in Taunton via the briefest of stints at Hampshire after his Lord’s release in 2013.

He started his career as a top-order batter, and that is easy to see when he is at the crease. But despite possessing pace that would rarely trouble the speed cameras, he has worked diligently with the both Jason Kerr and Stuart Barnes to turn himself into a frontline bowler.

It took a little time – initially he was more frequently sighted in a Scotland shirt than in Somerset colours – but he has featured regularly in red-ball cricket since 2018, and was a key part of the 2019 Royal London One-Day Cup win, taking 14 wickets at 27.28. Since the start of 2018, he has taken 96 first-class wickets at around 20.

And today, the man they affectionately call Slug was more speedy Gonzalez.

Davey took the new ball during all five games of last season’s Bob Willis Trophy but had been superseded by Gregory in four of seven innings this season before Saturday. He might have expected to step in at the start of day three, only to see super-sub Brooks given the nod.

If that was a deliberate ploy by Abell to get Davey ticking, it certainly worked. It took him just two balls to claim his first wicket although he owes half a cider to Tom Banton, who took a superb one-handed grab above his head at backward point to bring Sam Robson’s innings to a close.

Overton, who has beaten the bat more regularly than anyone in this game, found Max Holden’s outside edge an over later and the home side had their bounceback, and in the field they were soon barking out gentle reminders of the collapse at Lord’s that saw Middlesex lose seven second-innings wickets for just 30 runs.

And so, it proved: Abell removing Peter Handscomb for his second duck in three innings before Davey struck twice. First, Nick Gubbins gave Steve Davies his 600th first-class dismissal behind the stumps, much to the relief of Hildreth who grassed an absolute sitter off the left-hander three runs earlier before he had scored.

John Simpson was next to go, although not before suffering the ignominy of being struck on the helmet by Davey.

In his eighth over, Davey beat Robbie White’s outside edge three times and by the time he finished a mammoth nine-over spell he had taken bowled four maidens and taken 3 for 6. Not bad for a man who had been taken for an X-ray for a suspected broken foot on day one.

From 44 without loss, five Middlesex wickets fell for just 18 runs. Once more their brittle batting had taken hold. At that point their lead was just 151 and much rested on the shoulders of Martin Andersson and White.

Not one to miss out on the action, Overton returned and continued to impress. An excellent return catch was taken from a leading edge off Andersson and when White was trapped lbw – the star of Middlesex’s first innings barely waiting to see the finger raised – seven wickets had fallen in the session and it was advantage Somerset. In the end, Luke Hollman made a career best 21 not out – passing the 16 he had set in the first innings – and Middlesex made 117. 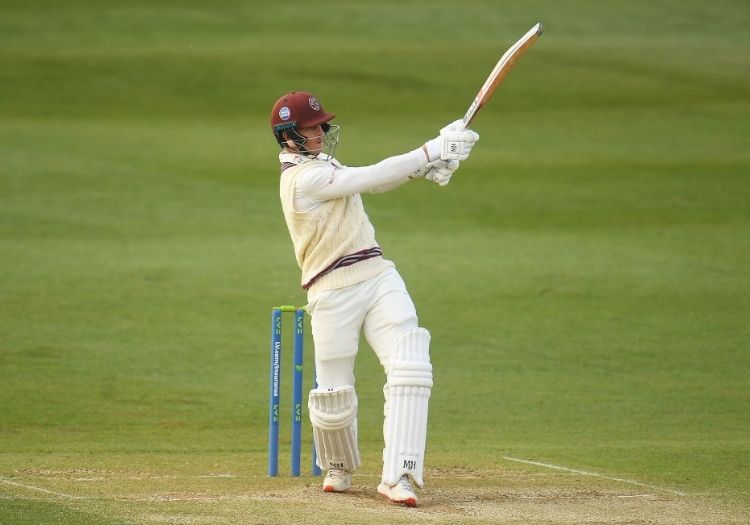 Tom Abell is not out overnight

Earlier, Somerset failed to make enough of the efforts of George Bartlett and debutant Lewis Goldsworthy. The pair had navigated a tricky period in near darkness on Friday night to see their side to 178 for 4 at the close. They had added a further 10 in the morning before Tom Helm – who twice had Abell dropped in the slips in the space of an over on Friday – finally got his first wicket of the season after almost 38 overs of toil.

All of those have come in the two fixtures against Somerset, and his relief was palpable when Goldsworthy feathered behind to John Simpson on 39. The young Cornishman showed impressive temperament during his maiden first-class innings, and enough fluency to suggest Jason Kerr was right to promote him.

Bartlett passed 50 – the only Somerset man to do so in the innings – before being shelled by Robson at slip off Helm shortly afterwards. Four runs later though, Helm had his man, Simpson this time taking the catch.

Craig Overton hit a breezy unbeaten 38 but Finn mopped up the tail, reaching his first five-for in first-class cricket since July 2019. It was just reward for a fine spell of bowling from the former England quick, who was able to gain lift even with the old ball. The new nut was imminent when Leach could only fend a well-directed short ball to Max Holden at short leg for this first time of the day. Credit too, to skipper Handscomb, who along with Finn had identified an area of weakness. Somerset lost their last six wickets for just 80 runs and at that point it was advantage to the visitors.

At the end of the day Nick Gubbins was called back onto the field and given a talking to by the umpires. Those discussions continued with Handscomb for a few minutes afterwards. Whatever he said was no doubt borne of frustration: his side have much work to do if they are to prevent themselves slipping to a second defeat to the Cidermen from a winning position in quick succession.