BIG BASH TEAM GUIDE - SYDNEY THUNDER: The productivity of Thunder’s batting line-up last year was a major reason that they were able to drag themselves into the play-off phase of the competition, but only three bowlers claimed more than nine wickets 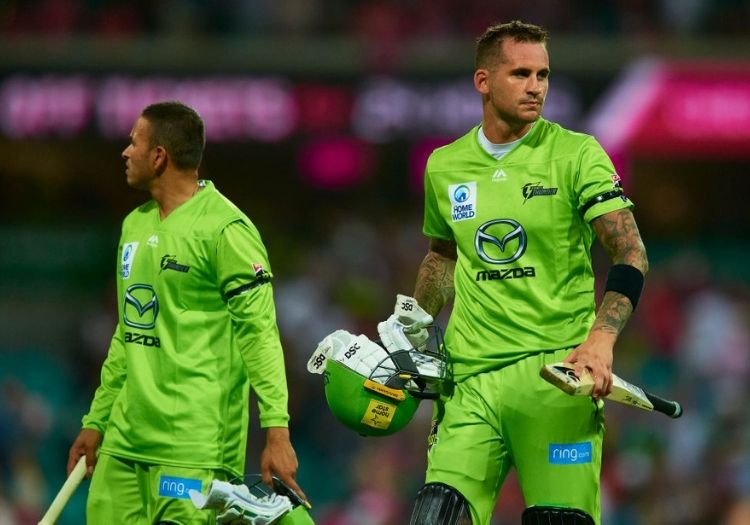 Despite their inconsistency in the group stage – they actually lost seven games and won only six, Sydney Thunder qualified for the latter stages and only fell short against Melbourne Stars in the last qualifier ahead of the final.

For their run, they were indebted to Alex Hales, who scored 576 runs at an average of 38.4 – the second-highest tally in the competition, and to Daniel Sams and Chris Morris with the ball. The pair shared 52 wickets, with Sams taking 30 in all – a remarkable effort from the left-armer that ultimately led to a place on Australia’s white-ball tour of England and a late Indian Premier League deal with Delhi Capitals, though he would go wicketless in three expensive outings.

Alex Ross, Usman Khawaja and captain Callum Ferguson were also among the upper echelons of the competition run-scorers, each contributing more than 370.

Alex Hales: His curious jettisoning by England has made him a must-have gun-for-hire at leagues all over the world. He hit 59 fours and 23 sixes in last year’s Big Bash, passing fifty on six occasions in the process, and sits at No.32 on the T20 Player Index – one spot ahead of Babar Azam. His availability across the entire tournament is an added bonus, especially with several other overseas players having to serve time in quarantine even once they arrive after international duty.

Daniel Sams: Quite simply, can he back it up? A phenomenal year last time around brought 30 scalps in 17 games and a wicket every 11.7 balls. He was also the only man to bowl two maidens. The importance of him replicating those efforts are accentuated this year by the absence of Morris, the South African allrounder who acted as his partner in crime in 2019 but has not been re-signed.

Ben Cutting: Big Bash aficionados have seen Ben Cutting at his best. And after nine years with Brisbane Heat, he has moved over to join Sydney, hoping for a second wind after a drop-off in his Big Bash form in recent times. Few hit a bigger ball than the 33-year-old allrounder.

The productivity of Thunder’s batting line-up last year was a major reason that they were able to drag themselves into the play-off phase of the competition: Hales, Ferguson, Khawaja and Ross represent a formidably consistent line-up, with the addition of Sam Billings a sensible, intelligent piece of business.

Thunder head coach Shane Bond, with whom Billings has worked in the past, explained: “It’s not easy to get someone who wants to be a middle order batter, but he wants to do that for us. And I know he wants to continue to do that role for England - and that offers so much to our team.”

Fellow overseas signing Adam Milne is another with potentially exciting consequences. The New Zealander’s pace is well-known and linking up with former Kiwi quick Bond could prove a clever move.

Beyond Sams, Morris and the leg-breaks of Jonathan Cook, no one in the Thunder squad took more nine wickets last year. Spinners Liam Bowe and Chris Green took three apiece, while Nathan McAndrew, Chris Tremain, Brendan Doggett and Gurinder Sandhu picked up just 14 between them. Sandhu – along with wicketkeeper Jay Lenton – has been released.

Plenty of batting but much of the bowling depends on Sams’ ability to back up last year’s haul and Milne’s capacity to replicate Morris’ contribution.