Power of Livingstone and Inglis leaves Scorchers primed to pounce

BIG BASH TEAM GUIDE - PERTH SCORCHERS: Between them, the big-hitting duo smashed 42 sixes and 830 runs in BBL9. Lancashire batsman Livingstone has signed on for a second successive year as a result 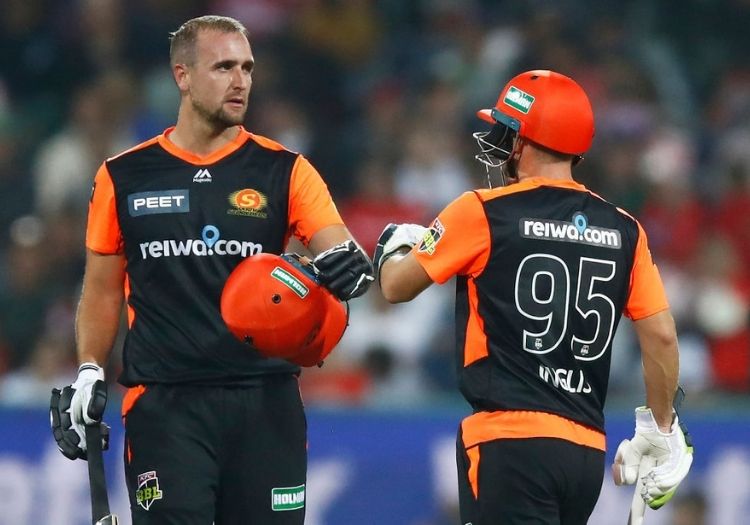 Perth Scorchers were at their best when Liam Livingstone and Josh Inglis were batting together at the top of the order. Between them, the big-hitting duo smashed 42 sixes and 830 runs. Lancashire batsman Livingstone has signed on for a second successive year as a result. Beyond them and captain Mitchell Marsh, however, Adam Voges’ side were light on big runs.

With Jason Behrendorff missing the entire campaign through injury, the bowling stocks were also light. There were 15 wickets each for Chris Jordan, Fawad Ahmed and Jhye Richardson.

Liam Livingstone: England exploits mean that he and Jason Roy will only be available for a portion of the competition, but Livingstone’s huge hitting made him an immensely popular addition to the tournament in 2019. Ranked 15th on the T20 Player Index, he is the sixth-highest rated player taking part in this year’s Big Bash. Roy, built with similar intentions, has a poor Big Bash record from previous spells with Sydney Sixers and Sydney Thunder, but will surely improve upon it this time around. Nottinghamshire’s Joe Clarke will fill in for Roy while on England duty.

Fawad Ahmed: Now 38 years of age, that means little for a leg-spinner in the franchise world. Imran Tahir, with Melbourne Renegades this year, is older still and remains one of the leading operators on the circuit. As for Ahmed, he comes into the tournament on the back of a fine campaign in the Caribbean Premier League, where he was part of a dominant, title-winning Trinbago Knight Riders side. In last year’s Big Bash, only Adam Zampa and Rashid Khan took more wickets as leg-spinners.

Colin Munro: Another new addition to an uber-aggressive top order, it will be interesting to where he slots in and whether Adam Voges opts to split up the tried and tested Livingstone-Inglis axis. Roy, one assumes, will come in at the top of the order, with Clarke another who has done much of his best work as an opener.

Joe Clarke, Jason Roy, Liam Livinstone, Colin Munro, Josh Inglis and Mitch Marsh will, at varying points, stride out to the middle – all brutal hitters of a cricket ball. If they can fire, Perth will be worth watching.

With the ball, Jordan doesn’t return this time around, but both Ahmed and Richardson will form part of an international-standard attack that also features Behrendorff, Agar, Marsh, Andrew Tye and USA international Cameron Gannon, who joins from Brisbane Heat. Not to mention Joel Paris and Matt Kelly, both of whom have performed well in previous Big Bash editions for Scorchers.

Last year’s reliance on the top order cannot be repeated, with more needed from Green, Agar and Turner. Cameron Bancroft is another who will hope to fit into a crowded batting line-up, and his nous and subtlety might be important amid a line-up of hitters. Kelly, Marsh and Paris were all expensive last year and will want to improve on those showings. The absence of an overseas seamer will put pressure on a raft of established Australian internationals.

Absolutely in with a shot. If nothing else, their hitting power will make them an interesting watch.