Women's Big Bash League state of play: Ahead of the knockout rounds, who has starred in this year's tournament?

Ahead of the tournament playoffs this weekend at Brisbane's Allan Border Field, XAVIER VOIGT-HILL catches you up on everything you might have missed during this year's tournament 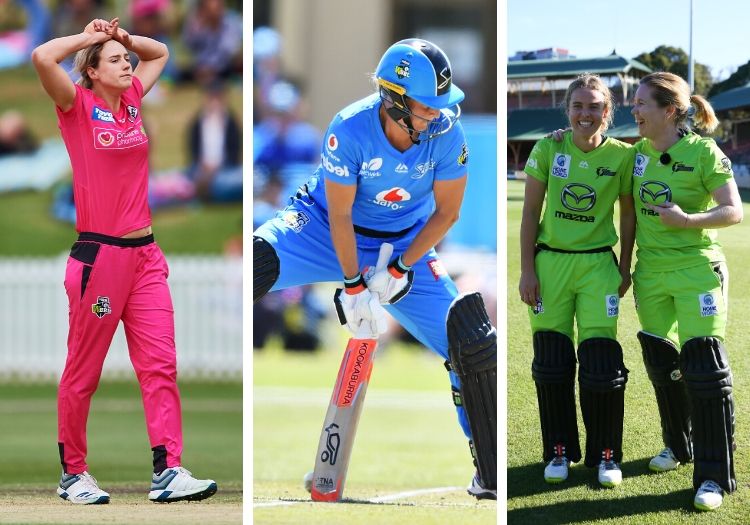 Just three games remain in this year's Women's Big Bash League, with this weekend seeing four sides head to Queensland's Allan Border Field to fight for this season's title. Brisbane Heat will be looking to defend their crown on home turf and face Melbourne Renegades in Saturday's second semi-final, while twice-defeated finalists Perth Scorchers will hope the addition of national captain Meg Lanning can see them past Adelaide Strikers in the first match of the day.

After the success of last year's WBBL saw 5,368 people fill out Sydney's Drummoyne Oval for the tournament's first standalone final, this year's competition will be the first to hold all three knockout games across one weekend. Brisbane Heat will host the playoffs after sneaking past Adelaide Strikers to the top of the table on the last day of the competition, with an unbeaten fifty from wicketkeeper Beth Mooney leading the Heat past Melbourne Stars in a rain-affected game to overtake the Strikers (who had lost to Sydney Sixers earlier in the day) on net run rate.

The Strikers had found themselves in an ideal position as opener Sophie Devine became the first WBBL player to record five half-centuries in as many innings. She would go on to pick up three more throughout the tournament (including 88 from 56 and all seven necessary super over runs against Sydney Thunder) on her way to a league-leading tally of 699, scored at an average of 77.66 and featuring 28 sixes.

Only Perry's 777 on the run to last year's final stands ahead of her, though Brisbane opener Mooney will also fancy her chances of catching up after reaching eight fifties of her own on the way to 672 group runs. 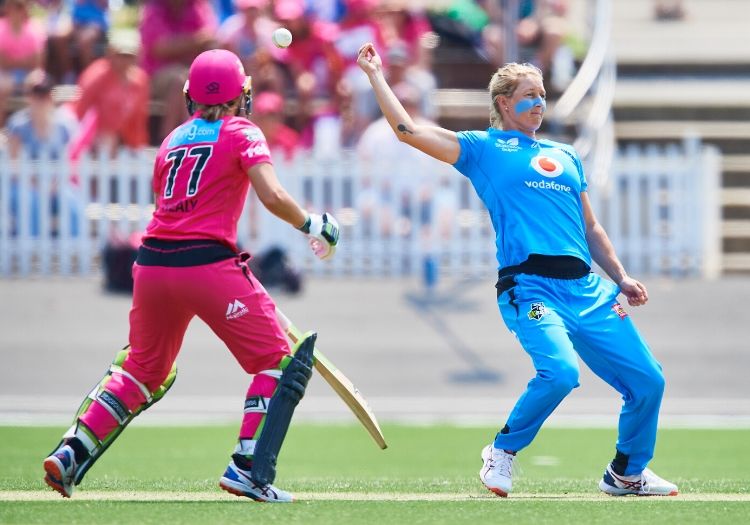 The importance of high scores in this year's tournament is underlined by each of the four leading run-scorers in the group stage representing one of the four semi-finalists. In addition to Devine and Mooney, national captain Meg Lanning made the most of her second season in Perth by passing the 500 mark on the way to making her maiden WBBL century in the final match of the group stage, and Renegades skipper Jess Duffin – who picked up the most recent of her 117 international caps during the 2015 Ashes – inspired her side's charge to the playoffs by scoring 214 unbeaten runs in her final four innings.

Once Thunder youngster Hannah Darlington finally managed to end that run, Duffin had reached 500 precisely and the Sydney sides' fates were all but sealed. Renegades offspinner Molly Strano then made it official, claiming her second three-wicket haul of the tournament to secure player of the match honours in a 29-run victory and draw level with Hobart Hurricanes quick Belinda Vakarewa at the top of the wickets table with 20 scalps.

They are immediately followed by no fewer than six members of the Heat and Strikers – 16 apiece for Devine and legspinner Amanda-Jade Wellington saw them trail Adelaide teammate Sarah Coyte by just one wicket, while international regular Jess Jonassen led Brisbane with three four-fors in her 19 scalps and Delissa Kimmince and Sammy-Jo Johnson close behind.

Vakarewa's Hurricanes may have peaked with back-to-back victories over the Stars to open the tournament, going on to claim just two more victories as the tournament progressed despite a remarkable consistency throughout the lineup. Each member of the Hurricanes' top six scored above 200 but less than 300 runs, with England captain Heather Knight leading the team in runs and new recruit Nicola Carey was key with 267 top-order runs and 13 wickets.

However it was South Africa's Chloe Tryon who starred – when she eventually got to the crease. Her 248 runs came at an astounding rate of 178.41 – 20 higher than anyone else to have had at least five goes – and included the two fastest innings of the tournament, led by an unbeaten 46 from 18.

That particular knock came against Melbourne Stars, who maintained their 100 per cent record of missing out on WBBL playoff spots by taking the wooden spoon off the Hurricanes, who had held it for the past two seasons. The Stars' campaign was their weakest yet, despite the best efforts of Proteas imports Lizelle Lee and Mignon du Preez, who were the only members of the squad to reach 400 runs. 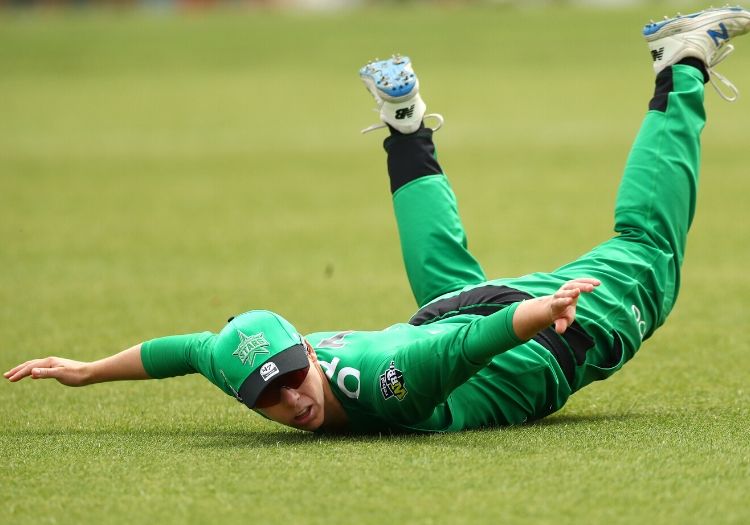 Elyse Villani moved to Melbourne Stars in an attempt to get back into international reckoning, however her side won just two matches

Though new captain Elyse Villani failed to press her case for Australia's T20 World Cup squad, averaging under 25, it was with the ball that the Stars failed to make an impact. Every one of their bowlers went for over seven runs per over, and nowhere were their shortcomings more obvious than against the Sixers in Perth: Alyssa Healy hit 106 from 53 in an untroubled opening stand of 199 with Ellyse Perry.

After finishing first and second in last year's table and holding a berth in each of the tournament's first four finals, it is the Sydney sides that will perhaps come away most disappointed with their performances. The Sixers had been in pole position for much of the tournament after claiming six wins from their first eight outings, but the side slumped out of playoff contention after leading run-scorer Perry was ruled out with a shoulder injury during a last-ball defeat to the Renegades – the first of five straight losses. That was a run matched by the Thunder, who then narrowly made it six by falling to the Strikers in a super over in Hobart.

The old and the new

The Thunder's final outing of the campaign may have been a dead rubber on paper after results the previous day, but the first half of a Junction Oval double-header still presented an opportunity for Alex Blackwell to sign off in style. The former Australia captain had retired from the international game in 2018 and from state duty earlier this year, before eventually confirming that she would indeed go out with the Thunder at the end of this year's competition.

Though it turned out not to be a fairytale ending to a storied career that included over 250 international appearances and five World Cup wins across both T20 and ODI cricket, her final campaign did prove one to remember as she led all Thunder batters with 317 runs. She invited teammate Rene Farrell to join her in a guard of honour after the final game as Farrell also opted to call it a day after 79 wickets in 66 Thunder appearances, and their former international teammate Kristen Beams also announced her retirement following the Stars' final fixture.

Blackwell's tournament had also been notable for forming formidable partnerships with Phoebe Litchfield, the young batter 20 years Blackwell's junior. While the 16-year-old was not able to play the full tournament – missing games to stay in school and complete exams is surely to be encouraged, despite prodigious talent – she was one of a number of youngsters to emerge through the competition and demonstrate the immense depth in the Australian domestic system – there is every chance the names Litchfield, Vakarewa, Vlaeminck, Brown and Darlington will be integral to the national side in the coming years, and each WBBL instalment sees this list of prospects swell. 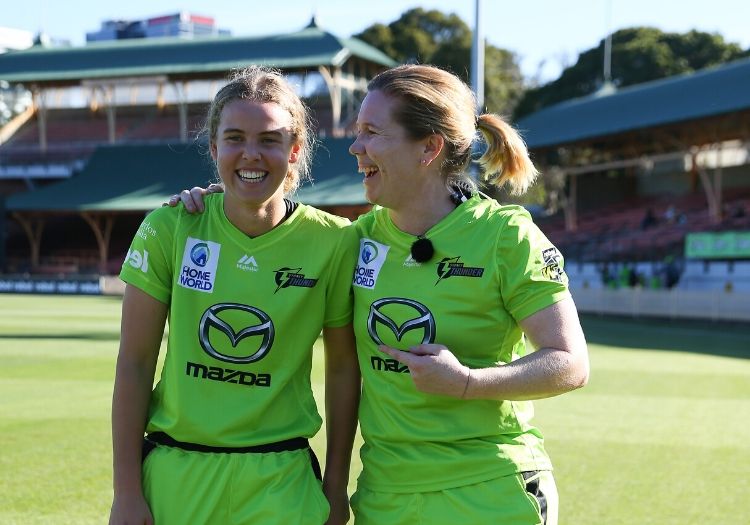 And the England players

England's upcoming series against Pakistan in Malaysia means that no English players will be able to remain with their WBBL sides for the competition's playoff stages, with Perth Scorchers set to be most affected as they lose Amy Jones and Nat Sciver, who scored a combined 733 runs. Among the Englishwomen, Jones' tally of 391 was beaten only by Danni Wyatt – whose 468 runs included four fifties – to provide a welcome turnaround from a dismal home international summer.

Sciver finished level with her national captain Heather Knight in the wicket tables as both claimed six victims with their part-time bowling offerings, while Knight also led the struggling Hobart Hurricanes with 282 runs at 23.50. Tammy Beaumont finished her stint at the Renegades just five runs behind.

Arguably the biggest task fell to uncapped Yorkshire batter Hollie Armitage, who received a call to join the Sydney Sixers following the tournament-ending injury to Ellyse Perry. Sixers wicketkeeper Alyssa Healy knew Armitage from the Kia Super League and invited her along as she had been playing club games in Hobart, however she reached a top score of 24 in five outings as the injury-hit Sixers limped out of the playoff race.

Armitage's Yorkshire teammate Lauren Winfield did not fair much better, managing just 105 runs in nine innings covering for the absent Stafanie Taylor at the Adelaide Strikers.