ANINDYA DUTTA: Pandemonium broke loose at the Garden of Eden. Weekes was garlanded by ecstatic fans running on to the ground. He would recount later that he ‘realised something had happened,’ but wasn’t sure what 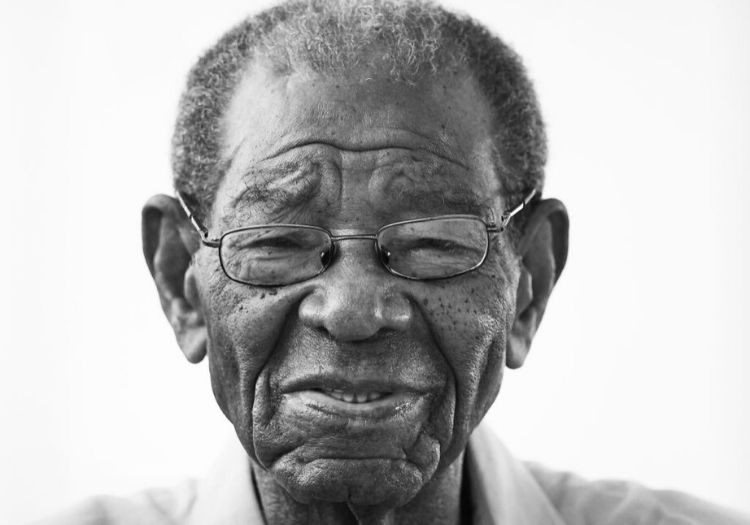 It was the winter of 1948 and India had been an independent nation for just over a year. The elation of freedom obtained after a long struggle was now tempered by the continuing trauma of Partition, and the weary soul of the country was in need of succour. It is at times such as these that sport comes to the rescue with its cooling wafts of positivity. That winter it would be provided by a group of cricketers from the warm climes of the Caribbean.

None would have more of an impact than a young man from Barbados, entirely appropriately born within 300 yards of the famous Kensington Oval - Everton Weekes.

The 23-year old may not even have been on the tour but for a piece of luck. But then as he often said: ‘You’ve got to be lucky in everything you do.’

A few months before, the MCC had descended on Caribbean shores to play their first post-war series away from the British Isles. Weekes, born in a poor black neighbourhood, had stroked his way up the cricketing ladder through sheer talent into a West Indies team filled with some of the greatest batsmen of all time - Frank Worrell, George Headley, Clyde Walcott, John Goddard and Jeffrey Stollmeyer. But in his first series in international cricket, his scores of 35, 25, 36, 20 and 36 in the first three Tests saw him dropped from the fourth Test at Jamaica.

George Headley, out through injury thus far, was brought back into the side. But on the eve of the match he was deemed unfit to play and Weekes was asked to fly to Kingston immediately. Weekes rushed to the airport to find that the only flight between the islands was overbooked and a seat could not be found for love or money.

Fate, however, can rarely be held back. Jack Kidney, former manager of the West Indies team and now the Barbados representative on the West Indies Cricket Board was about to board the flight for a Board meeting at Kingston. He gave up the seat for Weekes. The flight was diverted because of engine trouble to the Dominican Republic. By the time it landed the next day at Kingston, the match had started. To his surprise, Weekes was told he had not been struck off the team because the West Indies, one up so far, wanted their best squad on the field to prevent England from levelling the series.

Weekes proceeded to caress 15 deliveries to the fence with delicately placed late cuts and delectable leg glances on his way to his first Test century. His 141 was the anchor for the West Indies first innings lead of 263 that in the end brought them a 10-wicket victory. The 2-0 series victory over England was a statement unlike any other. It also earned Weekes a ticket on the long voyage to India.

It is a statement on the strength of the West Indies batting line up that Weekes, who had scored 141 in his previous Test innings (batting at No.3) and 172 not out against North Zone in the just concluded warm-up match, found himself walking in at No. 7 in the first Test at Delhi. Perhaps the injustice of it had something to do with the innings that he proceeded to play. This time there were 16 hits to the fence in his score of 128, one of the four centuries in the West Indies score of 631. India scored 455 and followed-on but managed to save the Test.

Reuters reported on his innings: ‘Weekes was faced with a ring of six fielders from point to mid-off to stop his powerful off-side strokes. He deftly countered by placing the ball through the wide gap between square-leg and mid-on.’ Vinoo Mankad eventually got his man, enticing him to drive low to the hands of extra cover, but the damage had been done by then. Following that innings, Weekes was promoted to No. 4 for the rest of the series. 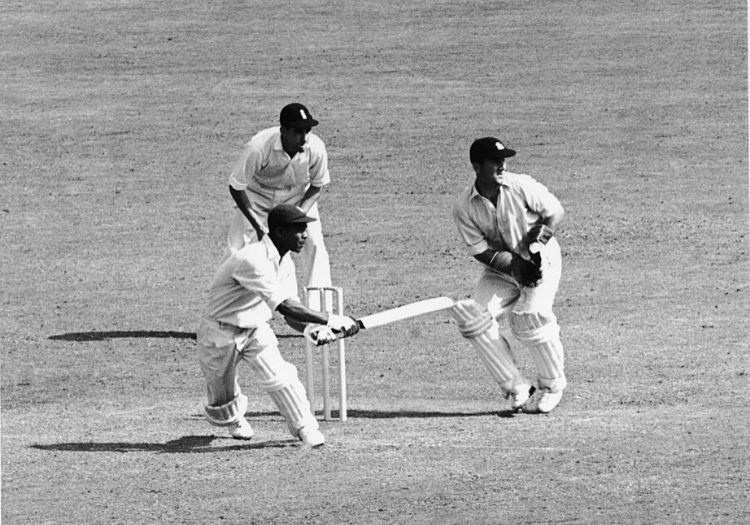 Weekes passed away on July 1 at the age of 95

At Bombay, Weekes came in just before stumps were drawn on the first day. By the end of the second, he was unbeaten on 183, and eventually departed for a brilliant 194 the following morning. Once again Mankad got his wicket off an outside edge to the wicketkeeper, but before that as Reuters pointed out: ‘Weekes showed how Mankad could be played by stepping back and cutting square.’

West Indies took a lead of 356 India following on once again, but some brilliant batting from Vijay Hazare and Rusi Modi took India to safety at 333 for 3. Going into Calcutta for the third Test, although the West Indies had enjoyed substantial leads in both matches, the two teams were still evenly matched as far as the series scoreline was concerned, thanks largely to the doggedness of India’s top order.

In Calcutta, Weekes would truly come into his own.

Tony Grieg, ignoring history, would rediscover with his ‘grovel’ comment three decades on what Lala Amarnath, the Indian captain, to his defence, did not have the lessons of history to fall back upon - it is a bad idea to rile the West Indians. Weekes would recall years later: ‘He [Amarnath] kept saying that when we got to Calcutta he was going to show us what swing and seam bowling was really like on a grassy pitch.’

It turned out that the grassy pitch in Calcutta was much to Weekes’ liking. In four exhilarating hours at the beautiful Eden Gardens, that no doubt reminded him of his home ground, the Kensington Oval, Weekes proceeded to despatch Amarnath swing and seam, and along with that all else that came his way to all parts of the park. His 162 runs out of a total score of 366, were studded with 24 boundaries.

My 12-year old father and 10-year old father-in-law, at that point unacquainted with each other, were in the stands that day, two wonder-eyed boys witnessing their first ever Test match. Seven decades on they would still be talking about that innings. ‘There has never been a better innings played at Eden than the one we witnessed from Everton Weekes that day,’ is a line I was to often hear over the years. Weekes himself considered it the best Test innings he ever played: ‘Every place I tried to hit the ball, I hit it….I’d had several innings, some not even hundreds that were good, but I thought Calcutta was my best.’

In the second innings at Calcutta, while in his own eyes it may have paled in comparison to that of the first, Everton Weekes would create cricketing history that stands unmatched 72-years on. Reuters reports: ‘He opened with one of those characteristic hooks in which he goes down on his knees and hits the ball along the ground.’ He was dropped by the hapless Amarnath on 86 and went on to complete his second century of the match. 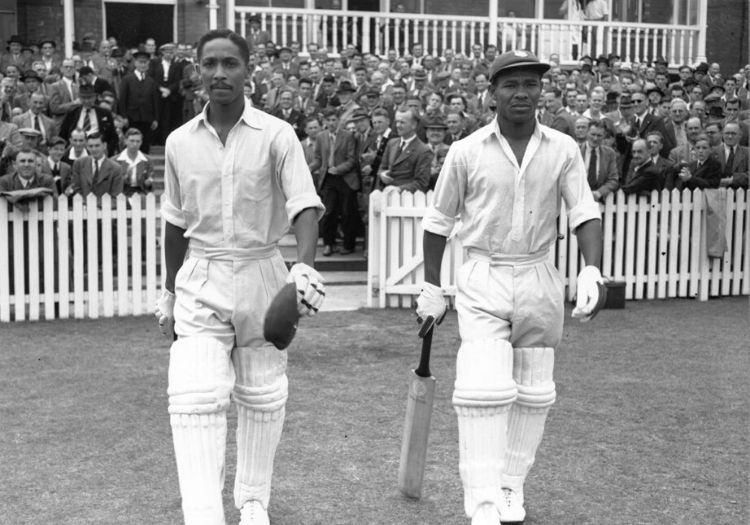 Weekes (right) striding out to bat alongside Frank Worrell

Pandemonium broke loose at the Garden of Eden. Weekes was garlanded by ecstatic fans running on to the ground. He would recount later that he ‘realised something had happened,’ but wasn’t sure what. He initially assumed the adulation was for his second successive century in the match, but it was far more momentous than that.

For the first time in the history of Test cricket, and the only time since, a batsman had scored five centuries in successive innings. Alongside Don Bradman’s final career average of 99.94, coincidentally set earlier the same year, Weekes’ record continues to be one of the most long-standing unmatched feats in Test cricket.

At Chennai in the following Test match Weekes would have had his sixth but for an umpiring error. At the score of 90, called for a single by the non-striker and then sent back, Weekes was adjudged run-out by the square-leg umpire.

Bacup CC, the Lancashire club who loved Everton Weekes as one of their own

Weekes would recount later: ‘I went forward and started running but came back into my crease and watched the whole things happen. The umpire might have thought he had seen enough of me for the series, but the decision was rather doubtful.’

Daunted by the West Indies total of 582, the resistance of the Indian batsmen finally melted after fighting the entire series with their backs to the wall. Dismissed for 144 in the second innings, India lost by an innings and 193 runs.

There was drama yet to play out in the series, however. In the final Test at Brabourne stadium in Bombay, India came back fighting. Set to score 361 to record their first ever Test victory on the last day, Indian put up what Stollmeyer was to describe as ‘the most thrilling day’s cricket I have ever witnessed.’

Following long periods of time wasting by the West Indians in order to ensure they won the series, at the start of what turned out to be the last over of the match, India had to score 11 for a win. When the fifth ball was bowled, there was 6 runs to get and about 90 seconds remained in the match. Umpire Bapu Joshi, in one of the great bloopers of umpiring, incorrectly counted both the number of deliveries and the remaining time, and whipped off the bails, calling stumps. The wait for India’s first Test victory would continue. Against the West Indies, that wait would last even longer, more than two decades. 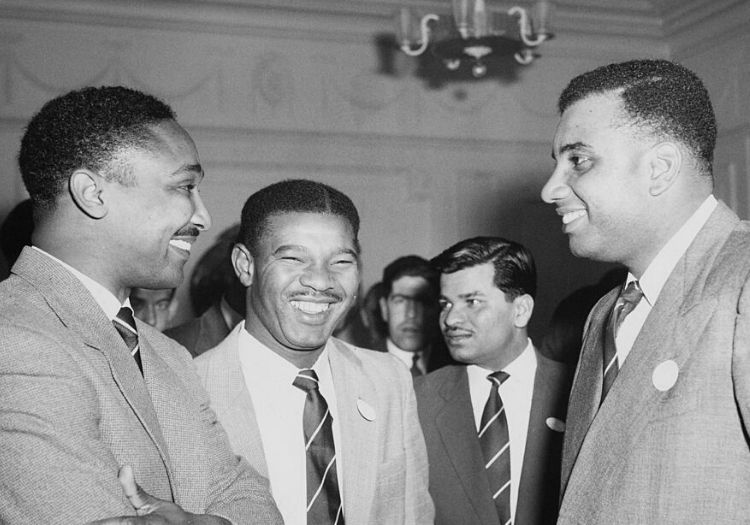 The series against India would lay the foundation for one of the greatest Test careers of all time. The legend of Everton Weekes had been launched. It would last a decade and 48 Test matches during the course of which Weekes scored 4,455 runs at an average of 58.16 with the help of 15 centuries.

Along with Frank Worrell and Clyde Walcott, Everton Weekes would form a trio of batting geniuses the world has never before or since. The three, forever referred to as the 3 Ws, together played 143 Test matches and scored 12,113 runs with 39 centuries.

They were born within 18 months and three miles of each other in Barbados, and as legend has it -  delivered by the same midwife, made their debut within months of each other, were all knighted for their efforts and would go on to redefine West Indies cricket.

This week when Sir Everton Weekes passed away at the age of 95, he was finally reunited in the Elysian Fields to renew the partnership with his two friends who had preceded him there. He was the last of the three to make the heavenly squad, but just as it had on earth, the career that is taking off now at the immortal Garden of Eden will undoubtedly be the most illustrious of the three.