How do you select a Test team after a two-year gap?

NICK FRIEND: Two weeks out from England Women's first Test against India, this is the question facing Heather Knight and Lisa Keightley 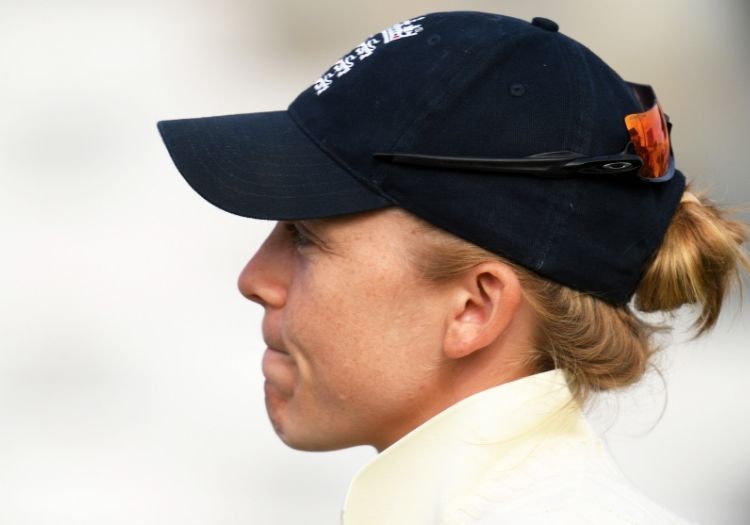 How do you pick a Test team when you last played the format two years ago?

That is the question facing Heather Knight and Lisa Keightley over the course of the next fortnight, at the end of which England will face India at Bristol – a first taste of red-ball cricket for the hosts since the Ashes summer of 2019; for the visitors, whose pandemic-era action has been restricted to a white-ball series against South Africa, their stretch without a Test match extends all the way back to 2014.

It is one of the quirks – if that is the right word – of the relationship between the women’s game and the Test arena: a pair that comes together all too rarely.

Speaking at the Kia Oval on Monday to begin the 50-day countdown to the start of The Hundred, Knight was quizzed on precisely that dilemma. “I always get asked this,” she said, considering her answer to a question about whether she would like to see an increase in the amount of Test opportunities.

“I would as a player. I love playing red-ball cricket; it’s a real event. Because we play so little, you’re almost learning as you go when you’re playing a Test match. That probably isn’t how it should be, but I totally get the reasons why. I think in terms of pushing the women’s game forward around the world, I think ODI cricket and T20 cricket is the way to go.

“I would love to see a series like we’re playing against India: one Test match as part of a tour. I think that could be a possibility going forward; I think red-ball tests you so much more as a player. It tests your skill, your ability to repeat, your ability to have a really strong technique as a batter. It ups the standard in that regard. I also get the reasons why we don’t play.”

Knight first became an international cricketer in 2010; her highest score for England – 157 at Wormsley against Australia in a match-drawing effort – went a long way to ensuring her side regained the Ashes in 2013. 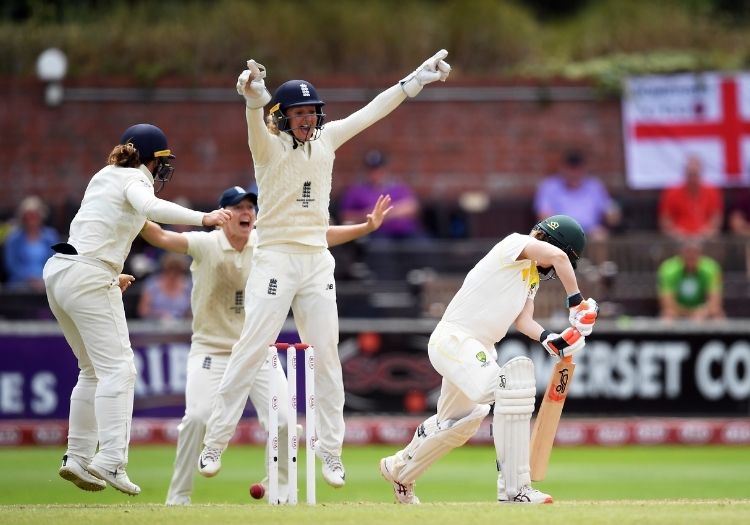 Sarah Taylor in action during the 2019 Test draw against Australia

But England have been involved in just five Tests since, and Knight has been present in all of them. Likewise, Sarah Taylor and Anya Shrubsole. Nat Sciver and Katherine Brunt have played in the last four, Georgia Elwiss and Laura Marsh in the last three. In 2014, the six-wicket defeat by India was the scene of Sonia Odedra’s solitary international cap.

From the side that drew with Australia in 2019 – a game ruined by poor weather and not helped by a slow Taunton pitch – Marsh has retired from the sport and Taylor, though back in county action for Sussex and set to represent Welsh Fire from July, is no longer available for international selection.

It means that England will make at least two changes from their last Test outing – and probably more: Elwiss’ most recent appearance for her country came a week after earning her third Test cap. As for Keightley, tasked with overseeing the process, she played in nine Tests between 1995 and 2005 – more than all in England’s squad bar Brunt. Her last direct involvement at Test level, though, came in February 2008 as Australia’s head coach in Ellyse Perry’s four-day debut.

So, with little to go on, the challenge for captain and coach is to come up with a plan. A three-day intra-squad warmup match was affected by rain and “not a particularly great wicket”, with the Rachael Heyhoe Flint Trophy the extent of the meaningful action for England’s contracted players since the beginning of the season.

“To be honest, it’s quite tough because we don’t play any domestic red-ball cricket or anything like that,” said Knight. “You go in on one-day form more than anything – there aren’t many stats to go on or anything, so it’s almost a little bit of feel or who you think has the temperament or the skill to be able to perform in red-ball cricket.

“A little bit of form goes into it as well; it’s not easy but we will sit down after the round of Rachael Heyhoe Flint matches on Saturday and come together. I’m sure we’ll put together a squad that’s going to really challenge and really be strong.” 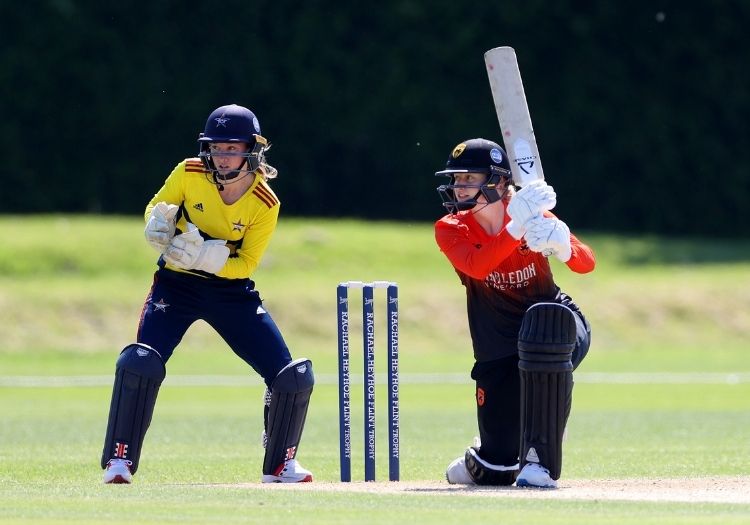 Amy Jones and Tammy Beaumont will be certainties along with Knight and Sciver inside England’s top six, while Brunt, Shrubsole and Ecclestone are shoo-ins in the bowling department. Otherwise, there will be decisions to be made, with Sarah Glenn a likely debutante, assuming there is appetite for a second frontline spinner. Kate Cross and Lauren Winfield-Hill – both of whom have been on the fringes of recent England sides – will also fancy their chances, having started the summer in fine form and given their respective skillsets.

There might even be a temptation to find room for Danni Wyatt, still to make a Test appearance; the white-ball opener has been bowling her off-spin for Southern Vipers, and so could slot in at No.7 as a counterattacking batter and a part-time bowling option. And then, there is Elwiss, not a regular pick but a seam-bowling allrounder, whose selection in 2019 allowed England the luxury of picking three spinners, with Kirstie Gordon joining Ecclestone and Marsh.

When those calls are made, Knight says she will factor in the circumstances of 2019 “a little bit”.

“People who have had success in red-ball cricket before can obviously take from that and take it into more games,” she explains. “But it was two years ago – it’s tough because things change so much.”

Knight also namechecked the bowling of Issy Wong and Emily Arlott, both of whom impressed for Central Sparks over Knight’s Western Storm, while she has spoken glowingly in recent press conferences about Sophie Luff, her regional captain and one of Storm’s six full-time, professionals. 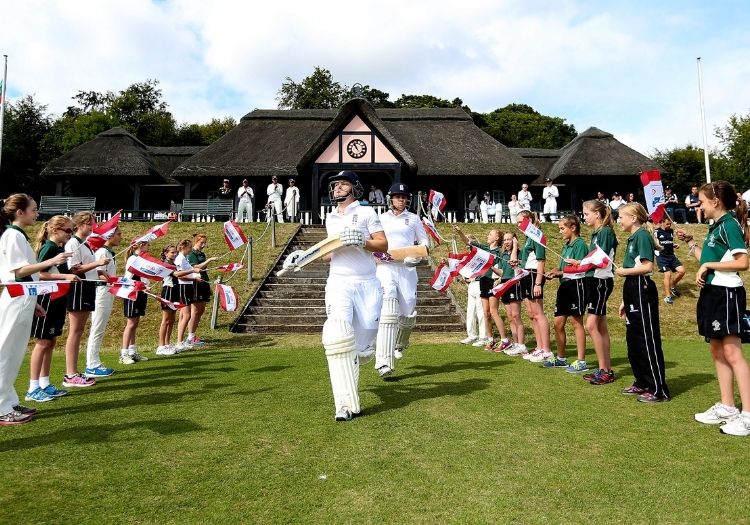 She said: “I’m just pleased to see the England girls go well and some of the domestic players as well pushing and putting their hands up, playing against the best players in England and the players they want to take their spots off. It’s been good to see those girls do well in the domestic setup.

“You want to create as much competition as you can, and I think we’re really starting to see that. We’re getting a bigger pool of players for England that we can pick from, players that can come in and perform, I think, because they’re playing at a really good standard domestically and training all the time, which puts them in the best place if they do get the call-up to be successful.”

Whether any names from beyond the England contract list feature in the squad, only time will tell. In terms of preparation, she added: “It is tricky. It’s more the mindset and the mentality. For us as a batting group, we’ve talked about how you get comfortable with not scoring and how you get comfortable soaking up pressure for a little bit and the rhythm of the game and getting used to that.

“We talk about that a lot in our preparation and after our final white-ball game in the Rachael Heyhoe Flint on Saturday, we will meet up and focus purely on red-ball cricket. We will have a good week of isolation in Loughborough, really homing in on the skills we need to be successful. It’s a slightly different preparation – probably more mental than technical.”