County Championship team of the week: Amla, Overton and Roach are in... but who else makes the XI?

OSCAR RATCLIFFE selects the outstanding side from the latest round of County Championship action, with some well-known names and lesser lights fighting for position 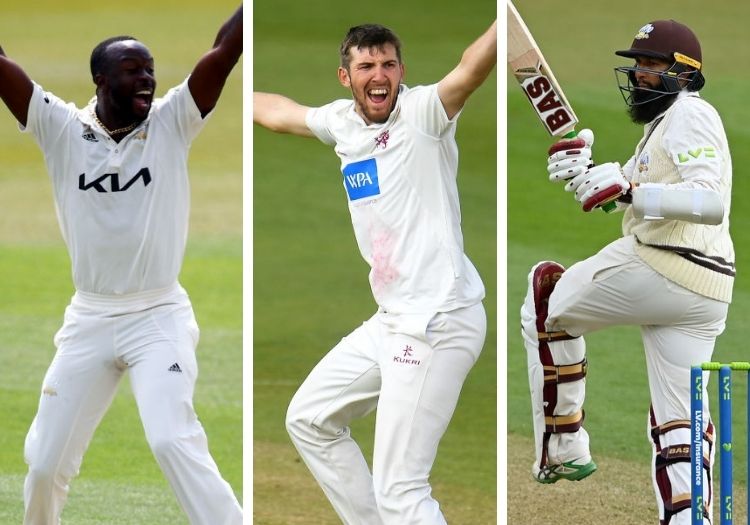 It was a welcome return to form for the former England opener at Hove, who coming into the round had 60 runs at 12. Jennings doubled his season tally in Lancashire’s underwhelming first innings, where his side conceded a 98-run lead by being bowled out for 230. With the bowlers having brought the Red Rose back into the contest, the left-hander anchored his side’s chase of 253, nullifying the threatening off-spinner Jack Carson, to hit an unbeaten 91 and make it three wins from three for his county.

Pipping his opening partner Will Young  – who also hit a diligent 124  – Lees, in his monumental 498-minute knock, ground a flailing Warwickshire into the dirt. With their opponents having been dismissed for 87 on day one, Lees and Young showed that there were many fewer demons in the pitch than  suggested by the Bears’ fitful batting, as Durham finished the opening day a single run ahead for the loss of no wickets. The openers’ eventual partnership of 208 was the county’s highest for the first wicket against Warwickshire, overtaking a record set by Graeme Fowler and Wayne Larkins in 1993.

Having hit a maiden Championship century in round two at The Oval, only to then be ruled out of Leicestershire’s next game with concussion, the opener must have wondered whether fate had got in the way of a potential purple patch. On day one, Evans provided an affirmation of his form with a measured century as his side piled on 421 at Bristol, a score which established a first-innings lead of 146 – the first time this season that the Foxes have been ahead in a game at its halfway stage. In the end, it was an advantage that was spectacularly overturned, but more on that below. 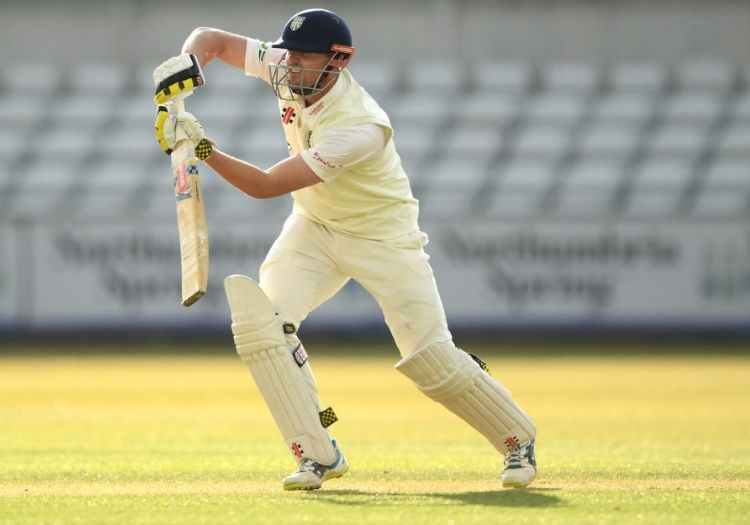 Alex Lees made an excellent century for Durham

Class will out, so they say. After a pair in Surrey’s drubbing at Lord’s, fears that Amla’s days as a prolific run-scorer were behind him were spectacularly disproven as the 38-year-old caressed an attack including Mohammad Abbas and Kyle Abbott to all parts of The Oval to evoke memories of his Test triple century at the same ground nearly a decade ago. It was the South African’s seventh first-class double ton and his 257-run third wicket partnership with Ollie Pope (who hit a typically fluent century of his own) is Surrey’s highest at The Oval against Hampshire.

Have Gloucestershire forgotten how to lose? After escaping The Ageas Bowl with a draw last week nine-wickets down, the Bristol outfit, having been 52 for 3 just after lunch, chased down 348 on the final day to beat Leicestershire by four wickets. That they were able to do so was in large part down to Tom Lace and his 224-run partnership with Ian Cockbain. Watchful until tea, with 216 required from 37 overs in the final session, the right-hander matched his partner’s scoring rate to set his side motoring towards victory. Lace was visibly annoyed to fall just short of three figures, but in a contest where others hit centuries – not least Leicestershire’s Lewis Hill, who another week would have been worthy of a place in this XI for his 121 – it was his knock of 97 that had as large an impact as any on the outcome of the match.

Lbw for a globe to a rampant Chris Wright – who finished with figures of 7 for 53 – in the first innings, Cockbain embodied Gloucestershire’s fightback with his phenomenal second innings 117. Having batted the afternoon session with his partner Lace to render a Leicestershire win remote, the right-hander flailed the Foxes attack to all parts with baseball-style thwacks, to register his first Championship ton since 2014, hitting four sixes in the process. The Glosters’ chase of 348 was their fourth-highest in the Championship and it was Cockbain who led them there. 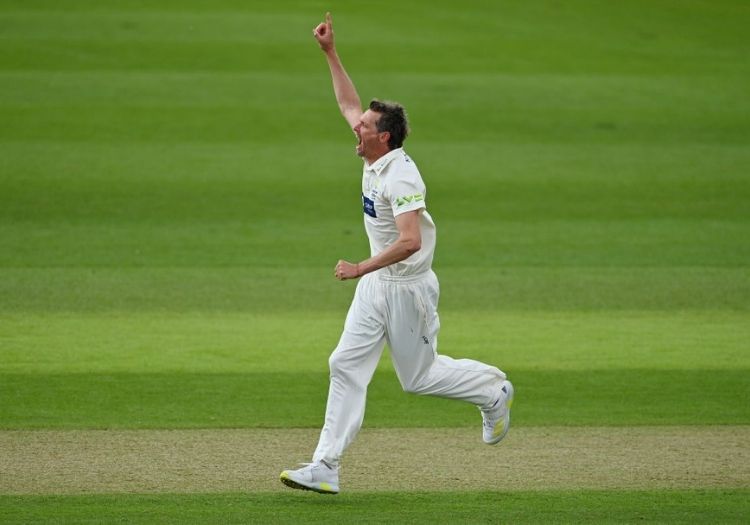 Michael Hogan was in the wickets for Glamorgan

For all the talk of Ollie Robinson as the next cab off the rank in the England seam bowling race, Overton – who this week overtook the Sussex seamer as the Championship’s leading wicket taker – continues to advance a compelling case. Eight wickets in the match for the second time in as many weeks, the bowling allrounder’s second innings five-for wrested the game back in his side’s favour to bowl Middlesex out for 117 in a four-wicket Somerset win. In a back-and-forth game, the right hander’s unbeaten 38 in the first innings was also critical in helping the Cidermen to recover from 195 for 6, at which point they were 162 runs behind their opponents.

Bowling allrounder Raine was Warwickshire’s destroyer-in-chief, as the Bears fell to 87 all out on day one at Chester-le-Street. Bowling wicket-to-wicket, the seamer made use of what movement was on offer to remove five of the top eight, all lbw or bowled, and had figures of 5 for 2 after 28 balls. As Durham finished the day a run ahead with all ten first-innings still intact, it was too much for Warwickshire who eventually fell to an innings defeat within three days.

The 31-year-old took his second career 10-wicket haul and nearly got Northamptonshire over the line with the bat in an agonising one-run loss at Headingley. Though at times wayward – the left-armer was at fault in part for the 31 byes stand-in keeper Ricardo Vasconcelos conceded – the South African found prodigious late swing to trouble Yorkshire’s tailenders and dismiss Gary Ballance twice in the match. Then, with bat in hand on day four, Parnell dug in for a 102-ball 33, sharing in a 32-run eighth wicket partnership with Gareth Berg, before being the last man dismissed, edging Steve Patterson to keeper Jonathan Tattersall with just a single required.

After an anonymous home debut against Leicestershire, where the Barbadian took two wickets in 35 overs on the flattest of Oval decks, Roach justified the hype prompted by his arrival in South London with a 10-wicket haul as Surrey beat group leaders Hampshire with a day to spare in Kennington. His second innings 8 for 40 were his career best and consigned his opponents to their heaviest innings defeat in 110 years.

The fact that in a day’s play a bowler one month short of his 40th birthday can take a five-for and still not be the oldest to do speaks of the quality of the elder statesmen on show in this year’s Championship. It was 39-year-old Michael Hogan’s Glamorgan who dominated the contest with a Kent side featuring Darren Stevens (his senior by five years and a month). The metronomic Aussie seamer decimated the visitors’ top-order in the second innings to leave his batsmen to chase a paltry target of 16 in a 10-wicket victory at Sophia Gardens.