County Championship team of the week: Who joins Parkinson and Bess among the standout performers? 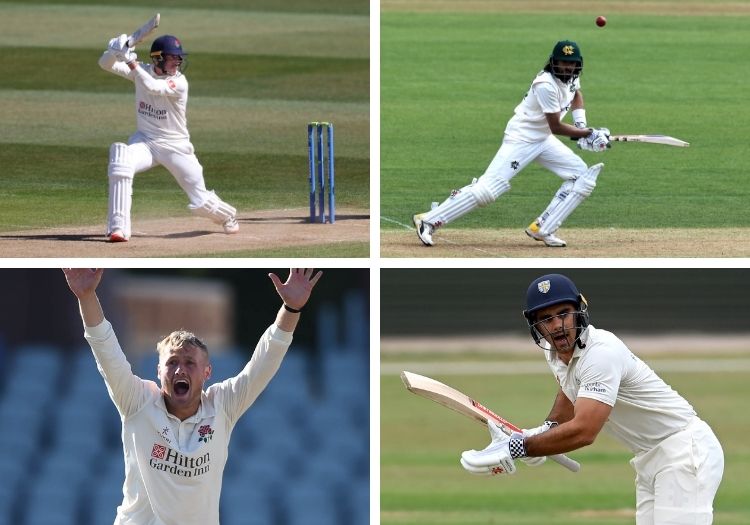 There could never be enough goodwill for Haseeb Hameed flowing through the English game, so social media was a refreshingly happy place over the last four days as the former Lancashire opener piled on the runs for Nottinghamshire. These were only his sixth and seventh first-class centuries and yet, curiously, this was the second time he had reached twin hundreds in the same match.

He broke all kinds of records in the process: with partner Ben Slater, this was the highest opening stand in a game between these two historic counties, while on his own he faced more balls over the four days than anyone previously in a County Championship match.

After their record-breaking stand, it feels impossible to have one without the other, so Ben Slater joins Hameed at the top of the order in this team of the week, with an apologetic nod to Jake Libby and Ian Holland, who have both enjoyed fine starts to the season.

Slater must rather like New Road, having made a hundred at the ground last year for Leicestershire against Lancashire in a game shifted to a neutral venue for Covid-19 reasons. This was his third red-ball century since last August and, in conjunction with Hameed, the left-hander led Notts to safety – a real show of character after the disappointment of defeat against Warwickshire last week.

It takes plenty of guts and even more talent to achieve what Rob Yates achieved on Sunday, consigning Essex to their first defeat in 22 first-class matches by nullifying the quadruple threat posed by Jamie Porter, Sam Cook, Peter Siddle and Simon Harmer.

Since the South African off-spinner joined Essex in 2017, only once before has he gone wicketless in the fourth innings of a red-ball game – that was against Surrey, when he bowled just four deliveries. Proof, you'd say, of how well Yates played. 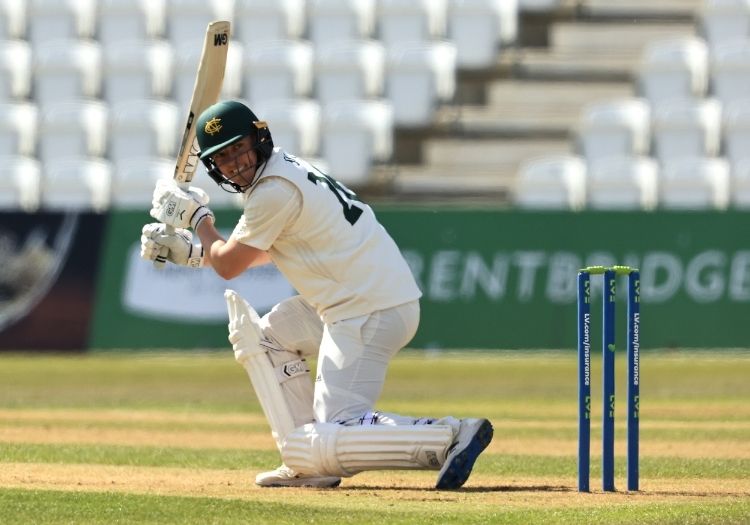 A second big hundred of the season for one of the most talented men on the county circuit. Successfully chasing down the third-highest total in Northamptonshire’s first-class history, Vasconcelos and former housemate Rob Keogh, who himself made 126, shared a stand of 239 for the third wicket in a truly remarkable victory, with the winning runs – a boundary from Luke Procter to take the score to 357 for 3 – coming in just the 73rd over.

The best gauge of how well they played came from the head coach on the receiving end of their excellence. “We came up against two guys who played faultlessly,” said Glamorgan’s Matt Maynard. “They didn’t give any opportunities, no close lbw shouts, no nothing. They batted superbly, the both of them.”

This website tipped David Bedingham as among the most astute pieces of business in the county game over the winter. Having featured in last year’s Bob Willis Trophy on an ancestry visa, this time around he is a fully fledged overseas player, seemingly coping with the pressures of that tag without any discernible issue.

His 257 against Derbyshire was his second mammoth score of the season, following on from his unbeaten 180 against Nottinghamshire in the opening round. He is the country’s leading run-scorer and might just have a chance – with 565 runs in April – to match Graeme Hick’s 1,000 before the end of May. In adding an unbeaten 53 in the second innings, he ensured that no one had ever scored more runs in a first-class game for Durham.

Chris Cooke: 193 runs in the match and dismissed once, but hardly even spoken about as a footnote at the end of it all, following the efforts of Vasconcelos and Keogh. It was Cooke’s ingenuity and sense of daring as captain that dangled the carrot in the faces of Northamptonshire’s batsmen in the first place.

With no promotion or relegation this year and a conference system that lends itself to trading in bore draws for last-day victory gambles – even if the draw provision has been increased to eight points – Cooke backed his bowlers on a terrific surface for batting. That his call backfired shouldn’t take away either from Glamorgan’s overall performance or his own display: a first innings hundred was followed by an unbeaten half century to set up the ultimately fateful declaration. 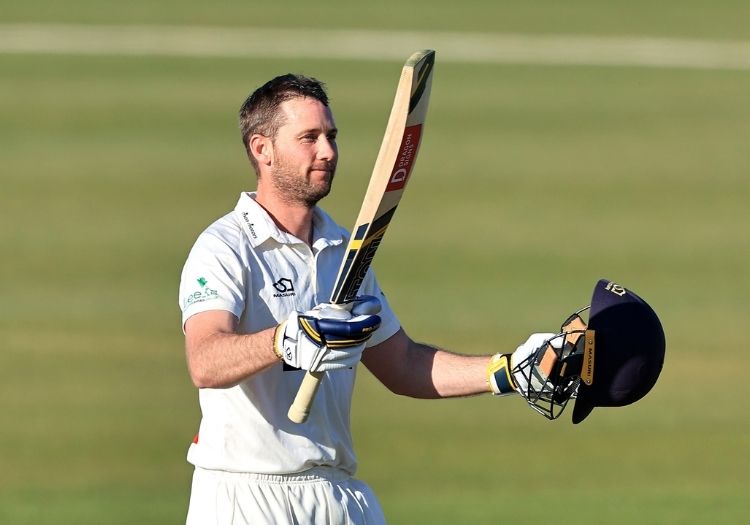 Chris Cooke was unfortunate to be on the losing side

Craig Overton admitted he was at his best: “I probably haven’t bowled better than that, at least not in the recent past.” Leicestershire head coach Paul Nixon described his performance as “outstanding, it was world-class”.

It meant that after the home side had bowled Somerset out for 318, any fightback was never likely. Overton dismissed both Harry Dearden and Marcus Harris in his opening spell and returned to have Rishi Patel and Harry Swindells caught, before trapping Callum Parkinson lbw, ending with figures of 5 for 25 from 18 overs, 10 of which were maidens.

Luke Wood had reached three figures before in first-class cricket, swinging himself to an astonishing hundred in only his eighth innings – a knock described by Mick Newell, his director of cricket at Nottinghamshire, as “the most remarkable I have ever seen in first-class cricket”. This one, given the circumstances, was arguably as staggering, having come to the crease with Lancashire 190 for 6.

By the time he was dismissed for 119 from 241 balls, the Red Rose were 435 for 8 and Danny Lamb – with whom he put on 187 for the ninth wicket – was on his way to a hundred of his own. He claimed three scalps with the ball as well, picking up Daniel Bell-Drummond, Joe Denly and Jack Leaning.

You might struggle to find a more popular six-wicket haul in the county game this year. Dom Bess’ winter difficulties were no secret, rather played out in public with all eyes on England’s Test tour of India. So, for him to return to domestic cricket in April at a new county in freezing conditions and produce a match-winning display for Yorkshire was tremendous to see.

He spun the ball sharply and his wickets – on a pitch that offered him assistance – came from good deliveries and the pressure built up during 54.5 overs of hard graft in the match. Watch out, too, for Jack Carson, Sussex’s young off-spinner, born in Northern Ireland but making waves at Hove. 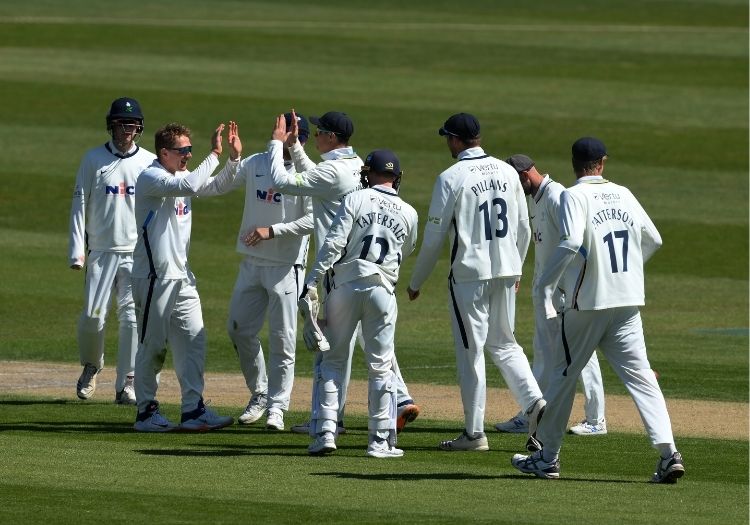 Like Bess, Matt Parkinson’s winter was long, gruelling and at times frustrating. And so, it is to his immense credit that he has begun this season in such fine form. He was left out of Lancashire’s opener but has bowled so well since then that only five men – Ollie Robinson, Craig Overton, Ryan Higgins, Simon Harmer and Mohammad Abbas – have taken more wickets in this year’s County Championship.

With runs on the board and a game to win for his side, he could scarcely have wished for a better scenario, claiming seven wickets to bowl out Kent and confirm an innings victory, picking up career-best figures in the process.

Surrey’s fatal collapse on the third day of their defeat at Lord’s was the result of a team effort among Middlesex’s seamers, but their failings with the bat on the first day were caused predominantly by the excellence of the 39-year-old seamer, who passed 850 wickets in first-class cricket along the way.

Match figures of 6 for 58 from 34 overs, including 17 maidens, speak volumes for his remarkable control and the hold he possesses over batsmen on the county circuit. “I think I’ve seen it before from some batters who are almost out before they are out there, psychologically,” he told The Cricketer ahead of the season.